I’ll finish the five photos thing later this week, for the minute however a brief interlude of summer.. it’s been something of a scarcity recently so perhaps deserves a mention.. 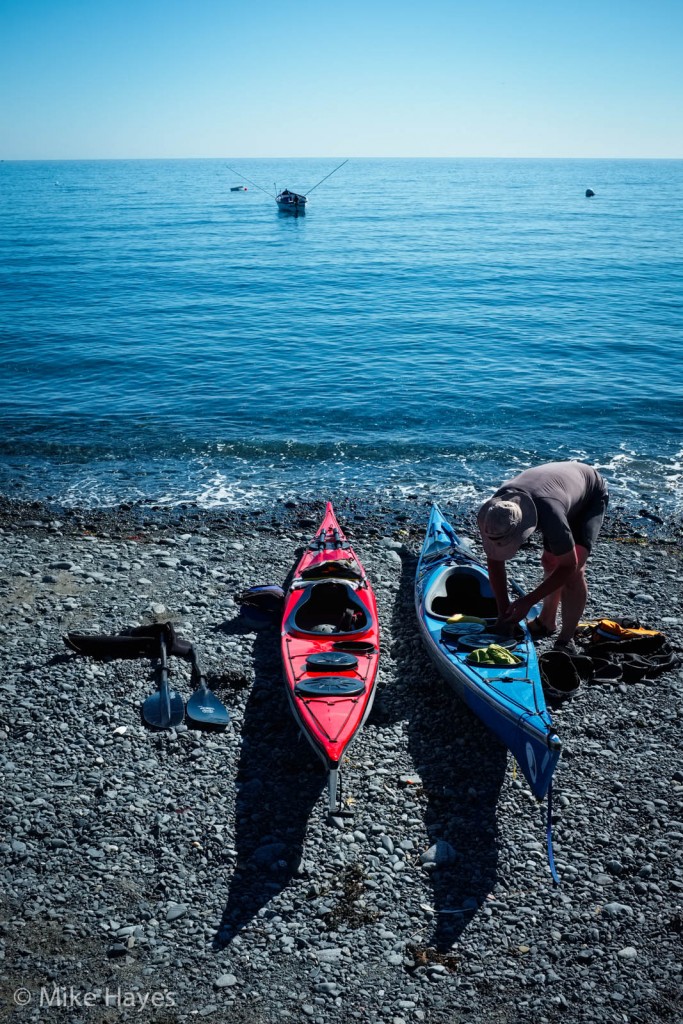 we were quite late getting on the water on Saturday morning… a warm, windless morning. Bit of a novelty… 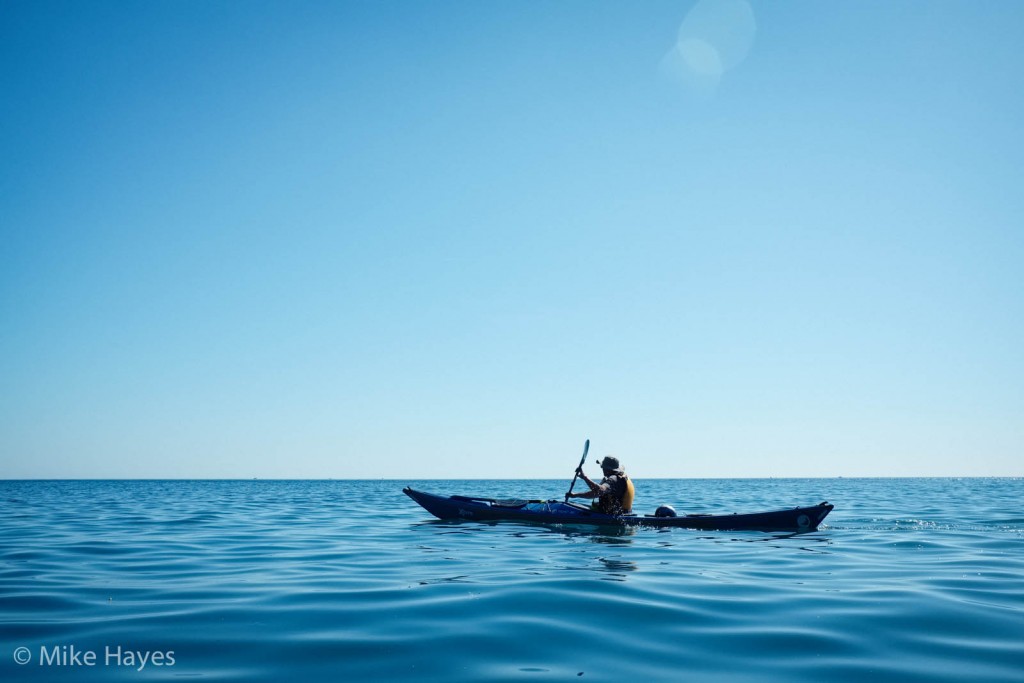 I’d dumped my car up the coast a week earlier and cycled back west with such a weekend in mind. Photographically conditions were extremely dull with a clear sky and high sun… but it serves to illustrate.. 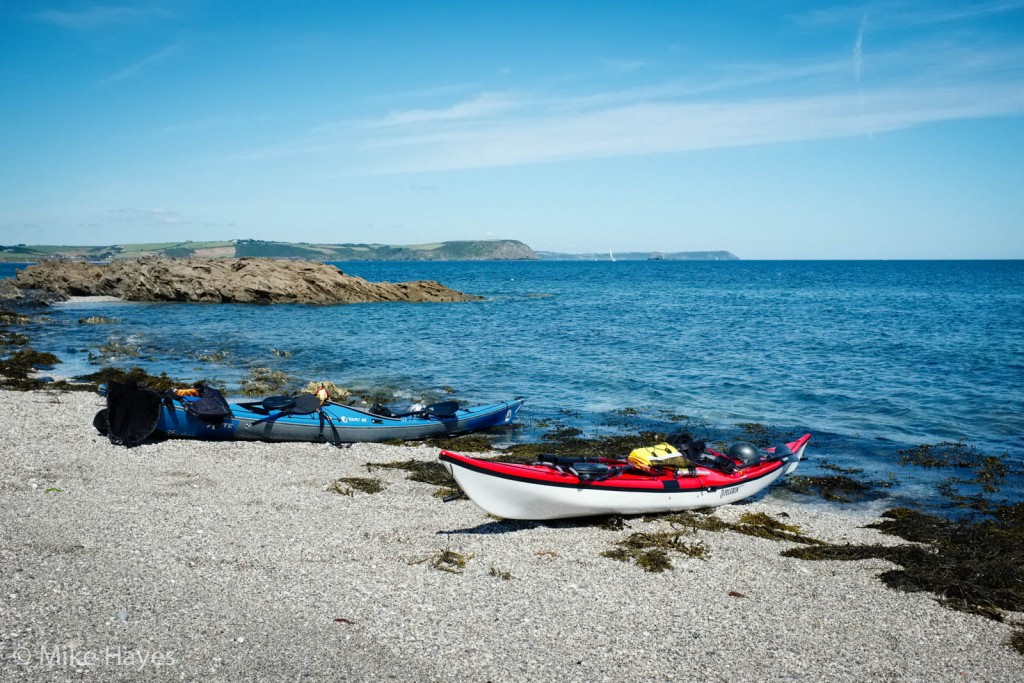 Being the middle of the school summer holidays, and a nice day, the water and beaches around the honey pots of Falmouth and Gerrans Bay were rammed with people.. but even so it is still quite possible to avoid the crowds and find empty spots to stop for a brew… 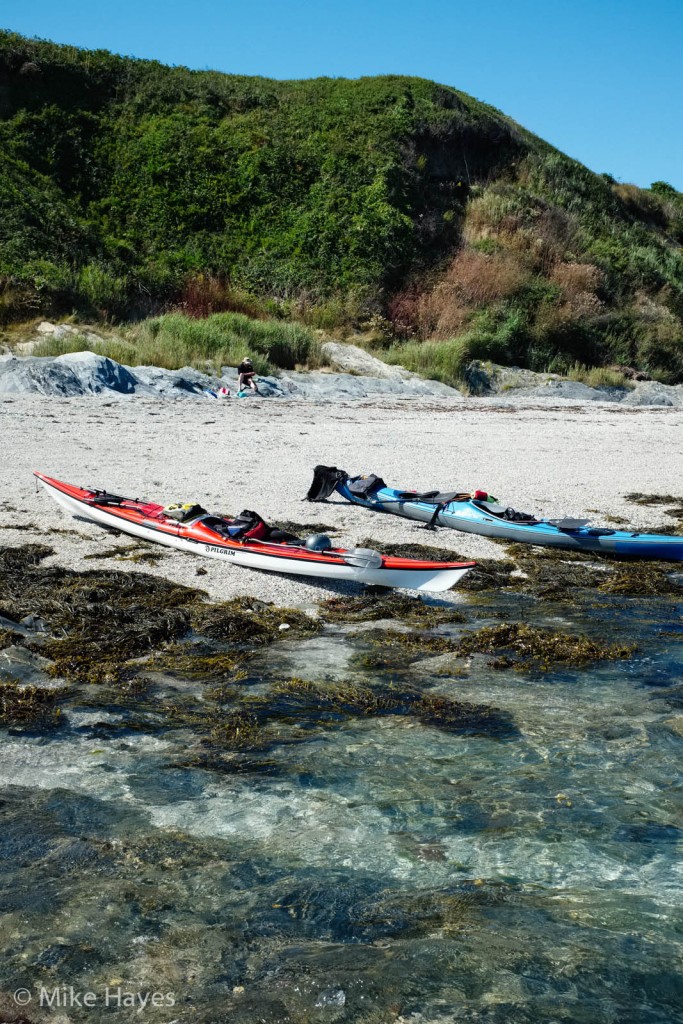 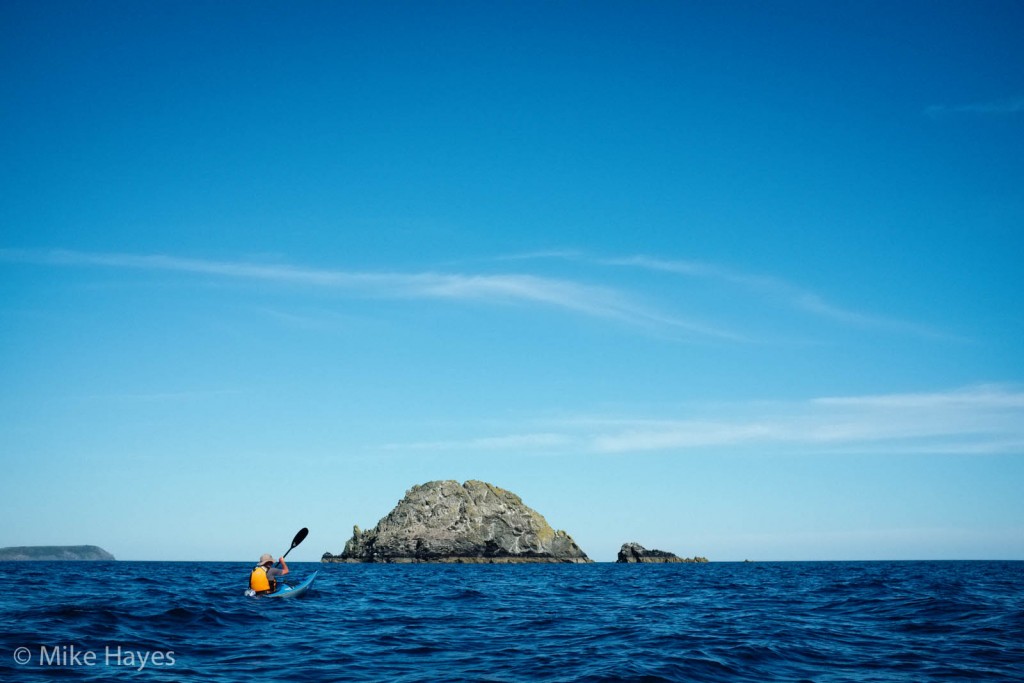 It was such a beautiful afternoon we just pushed on up the coast rather than stop and camp where we originally thought we might.. 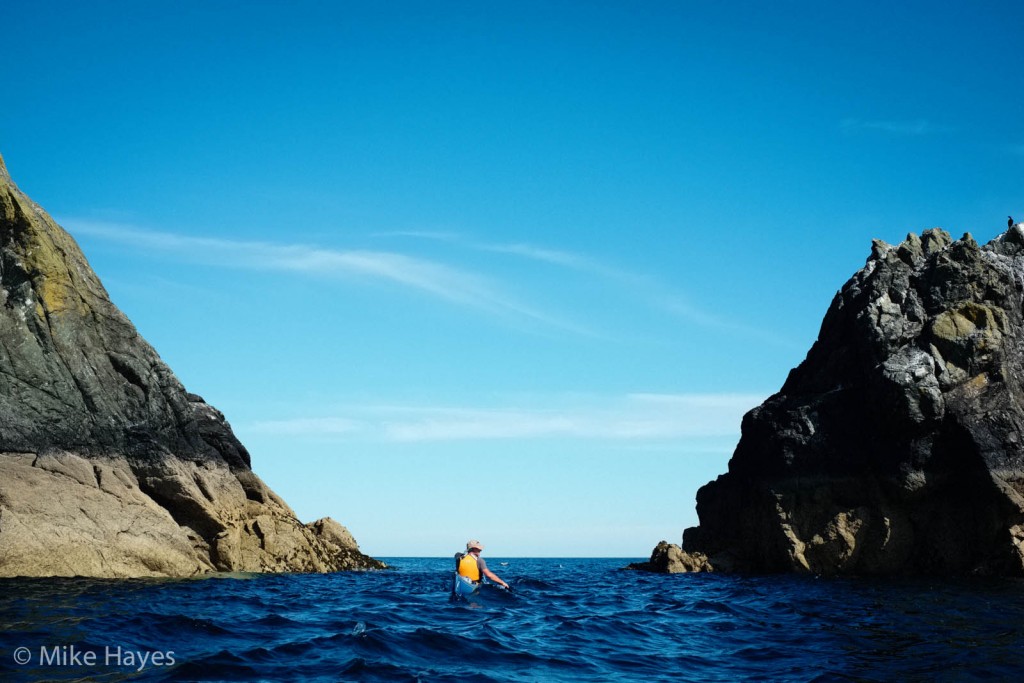 ..making 52km for the afternoon before looking for a place to stop. 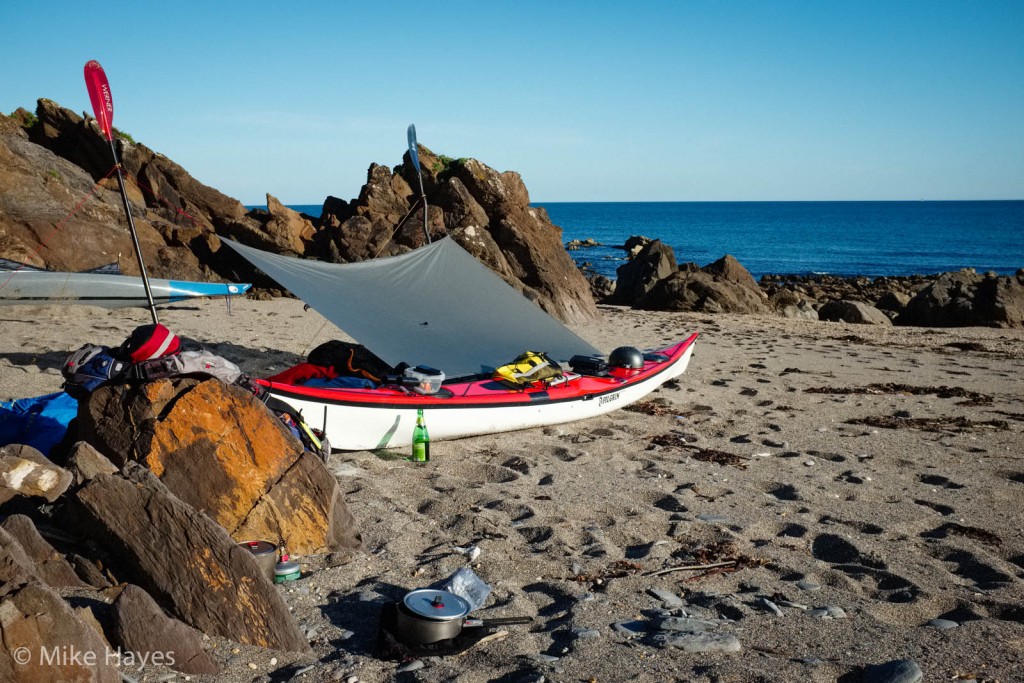 ..another inaccessible, and hence quiet, beach provided a nice spot to spend the night. Facing southwest so some lovely evening sun and fine views back down to the Lizard Peninsula from whence we had come. Landing and launching here at low tide (which it was in the evening and morning as on neap tides, is a bit awkward  on rock which perhaps acts as a handy additional ‘filter’ for tourist craft ;-) 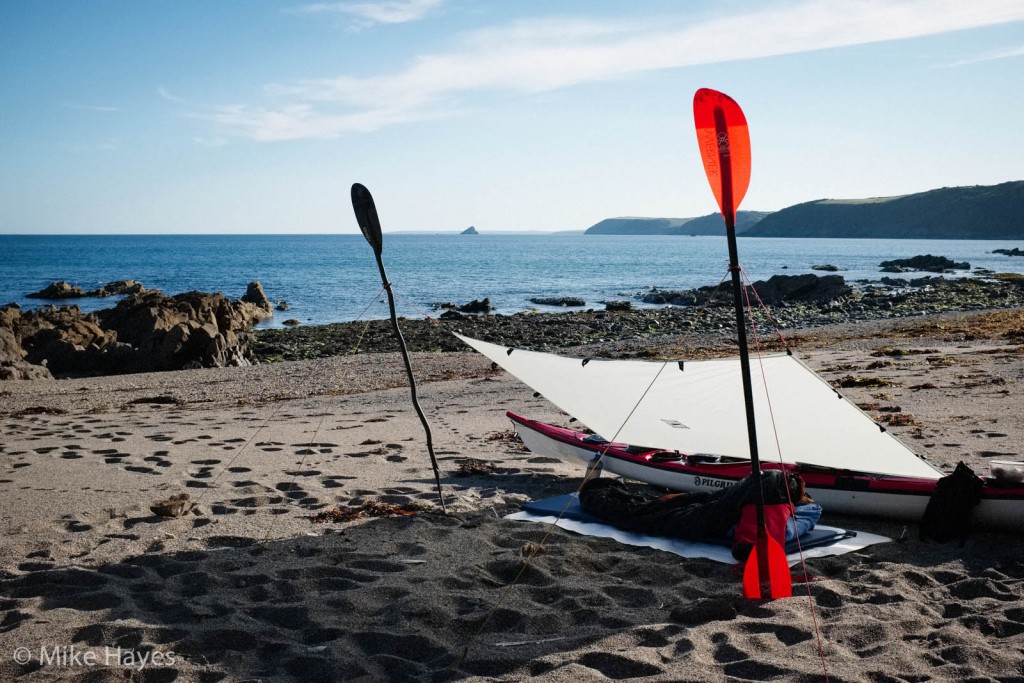 My quite old and well-used Integral Designs Siltarp makes a great shelter for one with the addition of a kayak and couple of paddles. It was a peaceful night, although amusingly beset with hundreds of sandhoppers that night, jumping around over my arms and head.. they don’t bite.. at least they don’t bite me, so it wasn’t a problem. 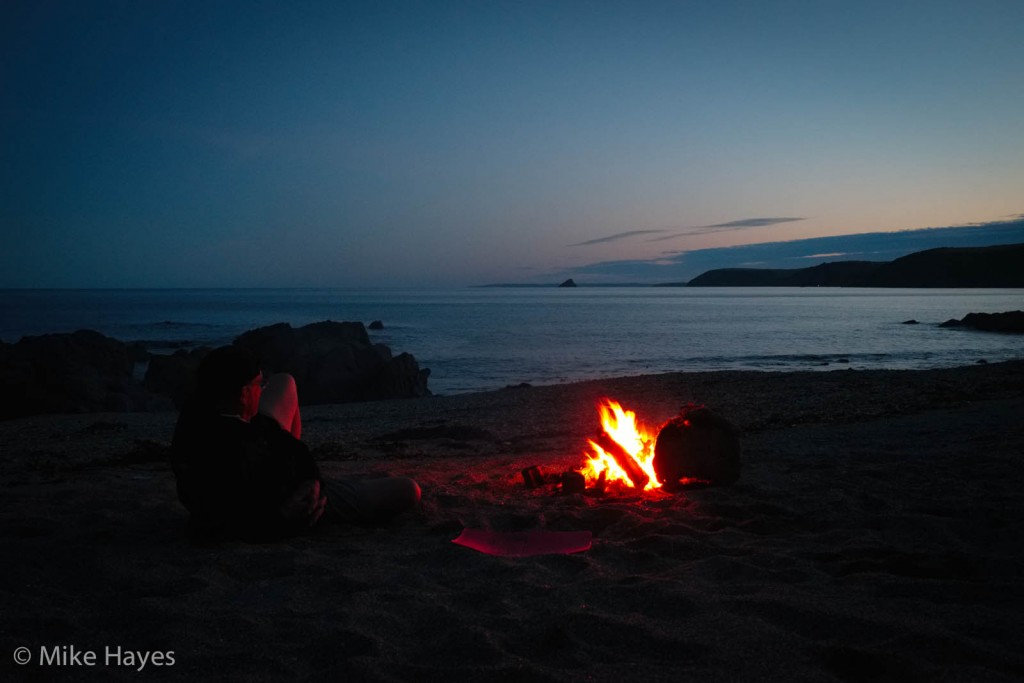 Being a beach accessible from the landward side only by means of a rope down a steep and slippery path, plus a bit of a walk there have been few evening visitors to take advantage of the driftwood piled up above the high water mark…. It would have been rude not to have a decent fire.
You can see the forecast weather front approaching from the west… 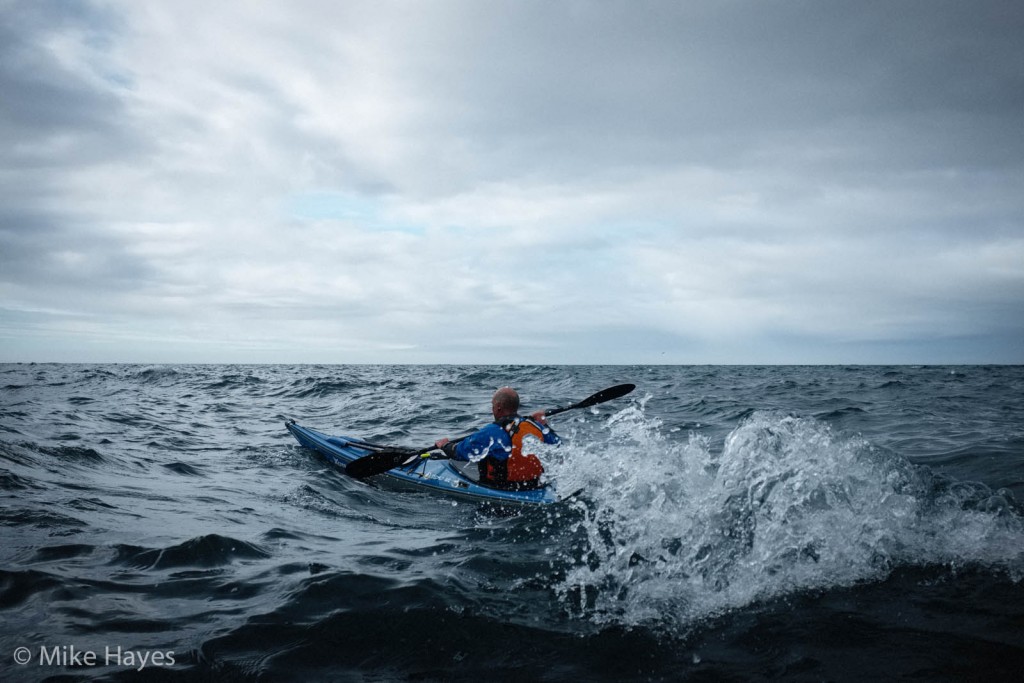 .. and true to the forecast Sunday dawned grey and blustery with the promise of rain to come. Still good paddling however :-) 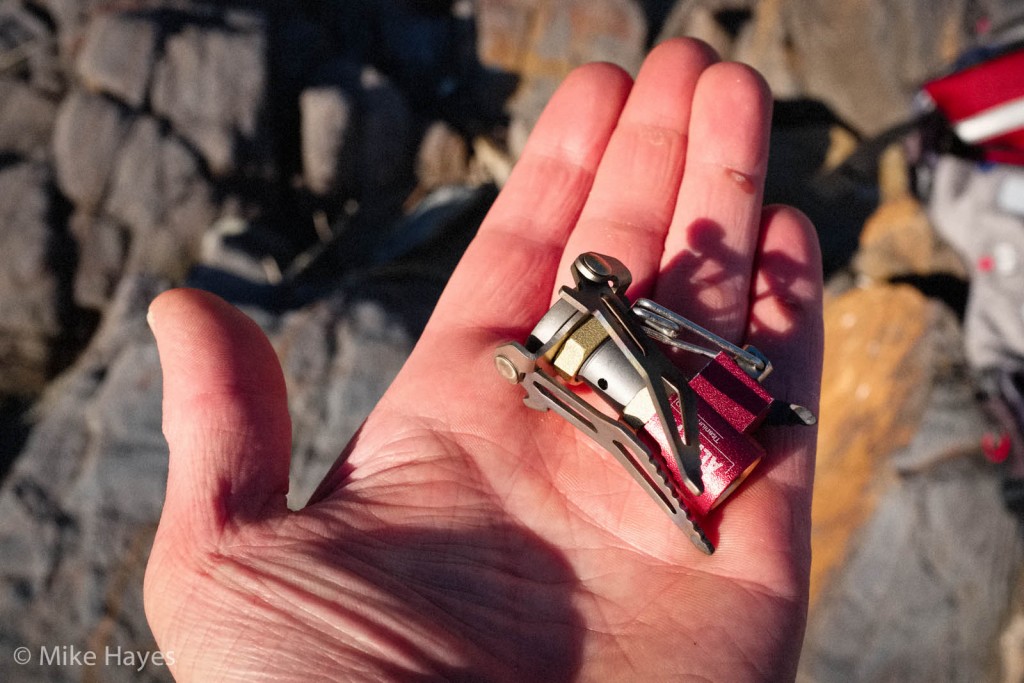 As an aside I recently picked up this tiny stove from Alpkit. I didn’t ‘need it’ as such but being titanium, and just 20 quid… I couldn’t resist. The titanium (+ anodized aluminium) construction may prove to be of benefit for sea kayaking, other stoves I’ve used in a beach/kayak environment have eventually corroded quite badly.. MSR Pocket Rocket springs to mind. 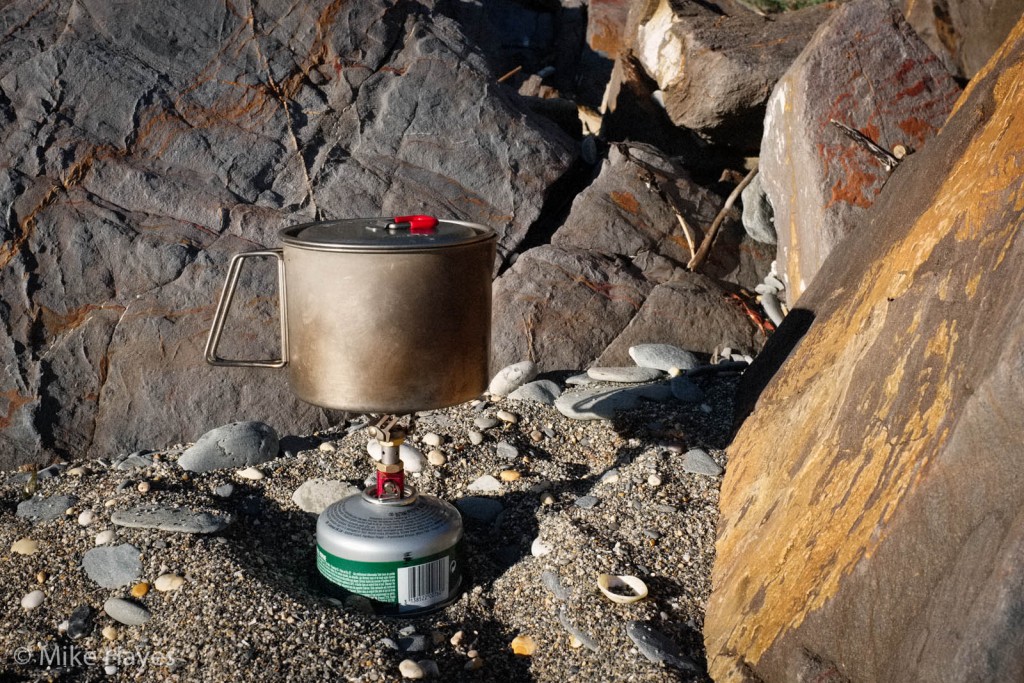 Despite it’s tiny size however it chucks out a decent amount of power, and combined with a small canister and an 800ml titanium pot makes a terrific lightweight cooking setup. The only downside being so tiny is larger post have to be balanced carefully and the small flame spread means more chance of a hotspot and burning stuff to the bottom of your pan if you’re not paying attention… The simmer is very good by the way.

2 thoughts on “A brief interlude of summer”