It is seldom that sea kayaks and sheep appear all wrapped up in the same story but that’s what happens I suppose when one ventures north of the border into Devon, which, if you’re from West Cornwall, really is like visiting a foreign country.. they talk funny and do cream teas all wrong.. It’s not a difficult story to tell however as I have pictures. Before I start however I should introduce our protagonists, my friends from British Sea Kayaks and Whetman Equipment respectively.. plus of course me, although I prefer to maintain a low profile, especially where sheep are involved. As for the poor title of this post, inspiration escaped me and a fallback to the three words that sum the day up was all I had…. 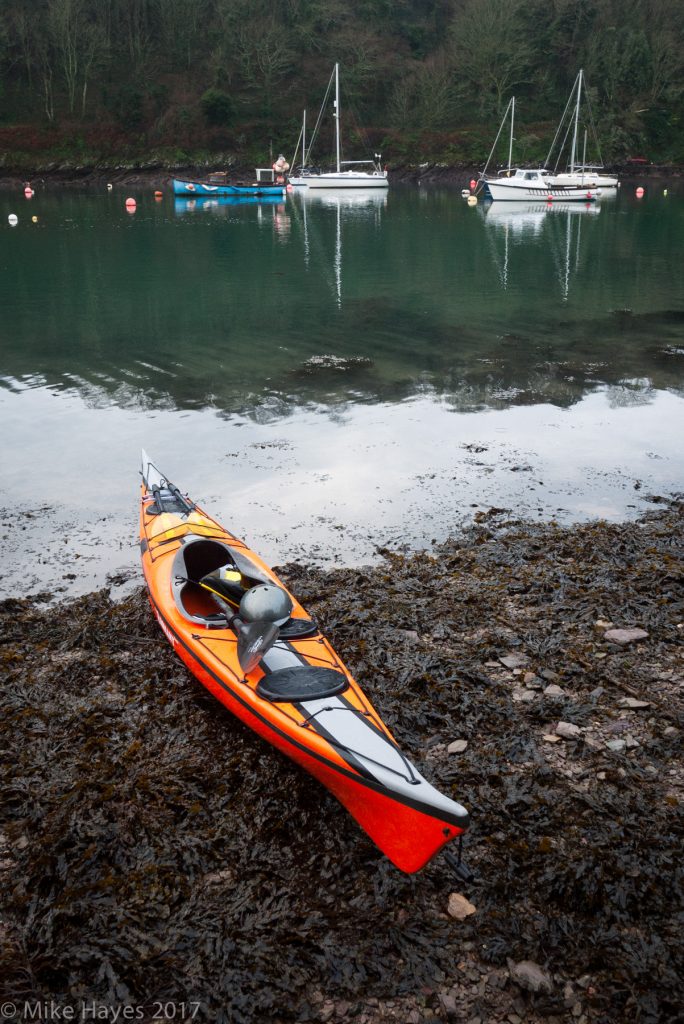 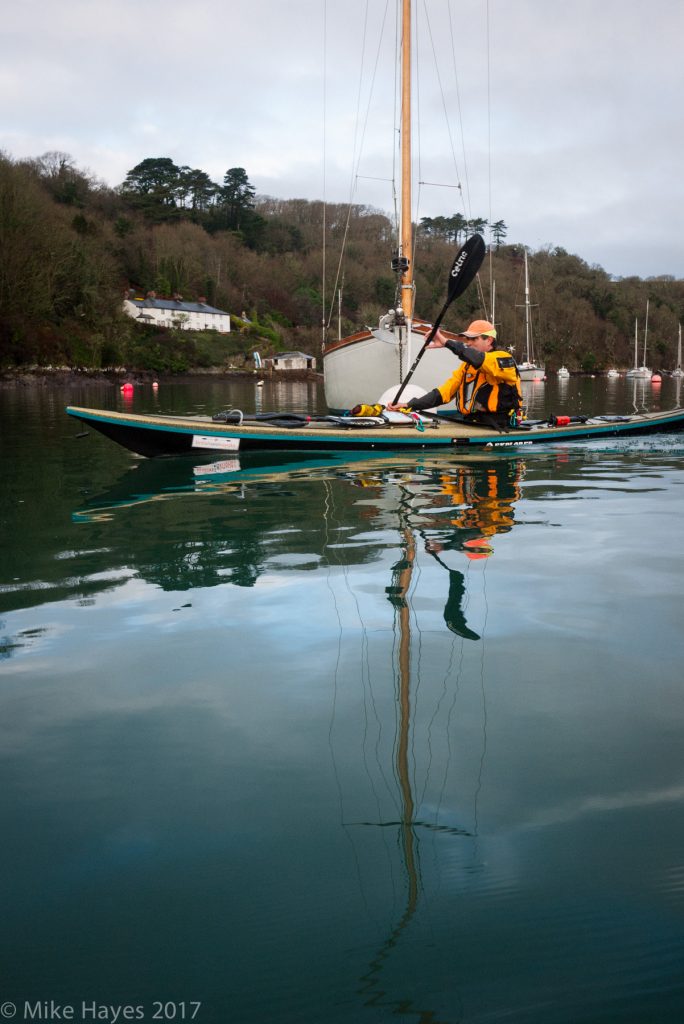 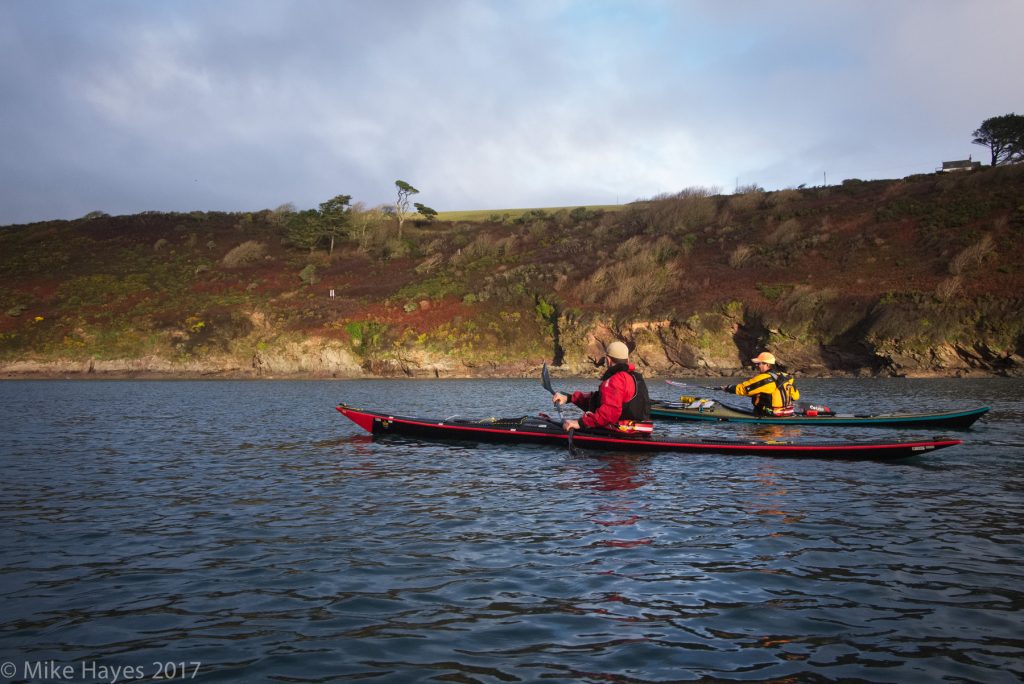 A few patches of brightness on the valley sides were evident as we paddled towards the ocean. The colours of the winter hillsides were rather lovely. 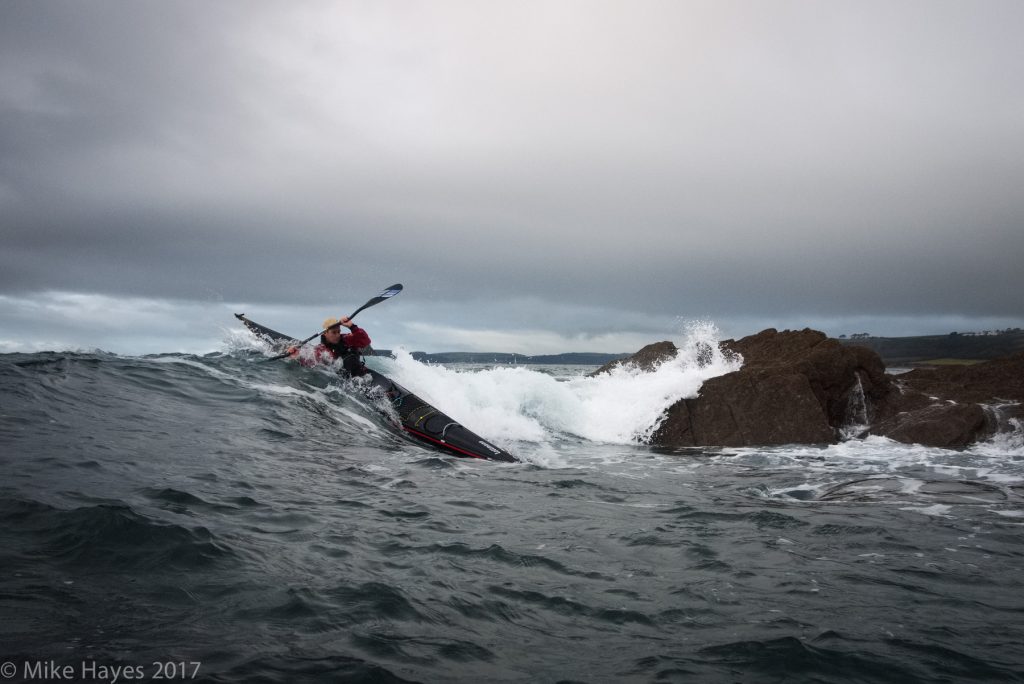 Once outside the estuary and heading east there wasn’t much swell around however we did find a few fun things to play with… here’s mister Whetman pushing his luck a little. It did end well :-) 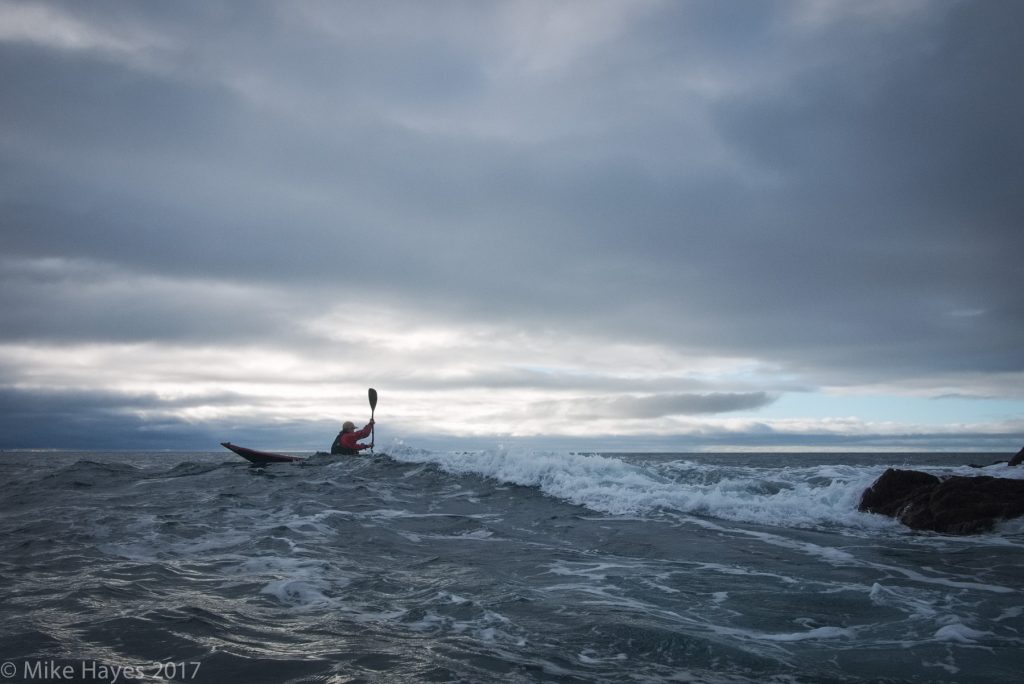 I only had a fixed 28mm lens which is a bit wide but with the winter skies as they were I rather like the overall context. 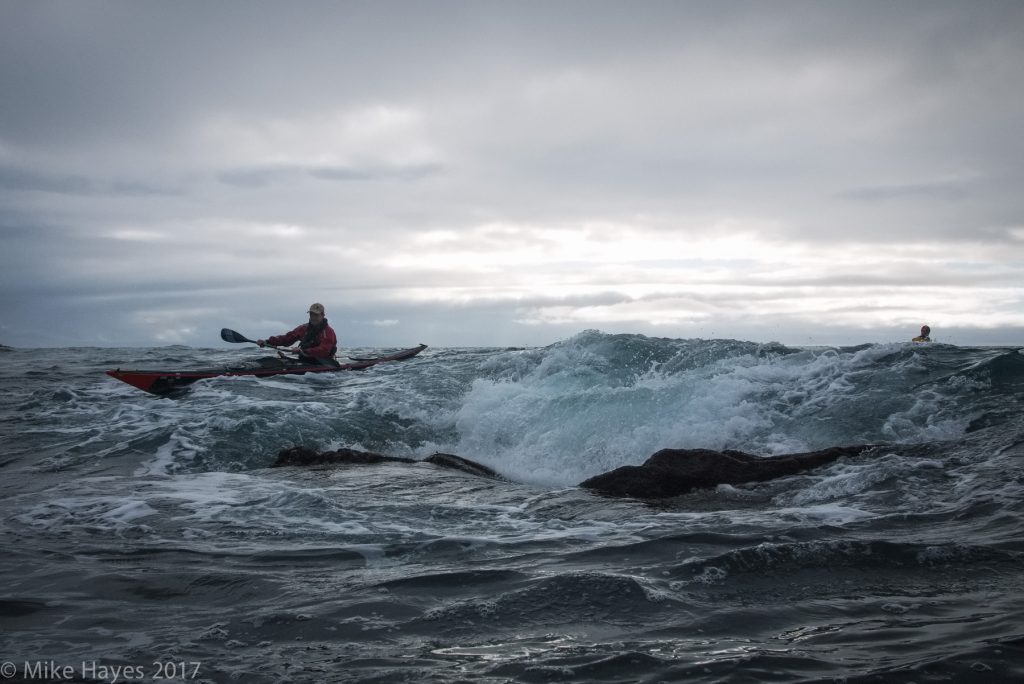 Progress east was slow as there turned out to be quite a bit of messing about to be done. 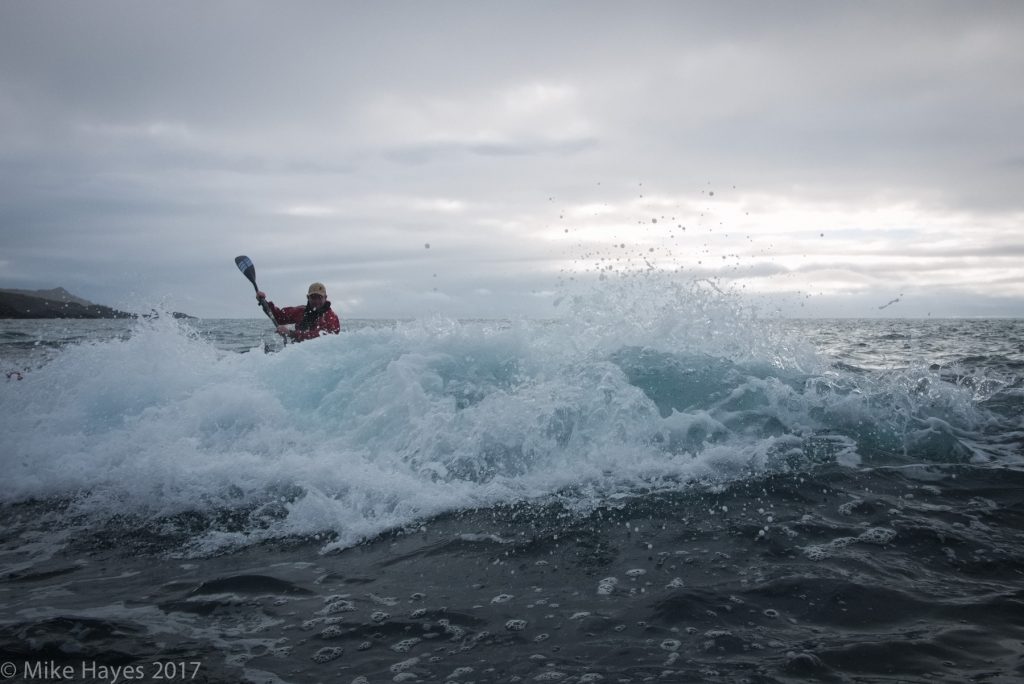 It was all pretty benign but well worth it. wide lens does give a sense of immediacy I think lacking in on-water shots with a telephoto.. I think.. one just has to sit in the middle of whatever is going on and be prepared to drop the camera quickly.. 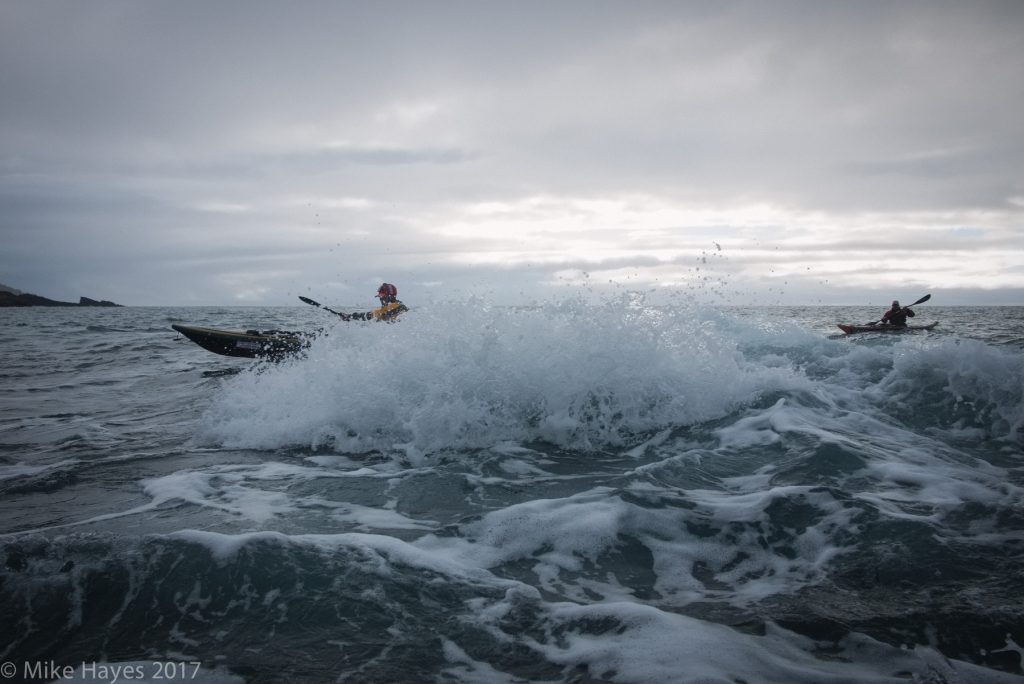 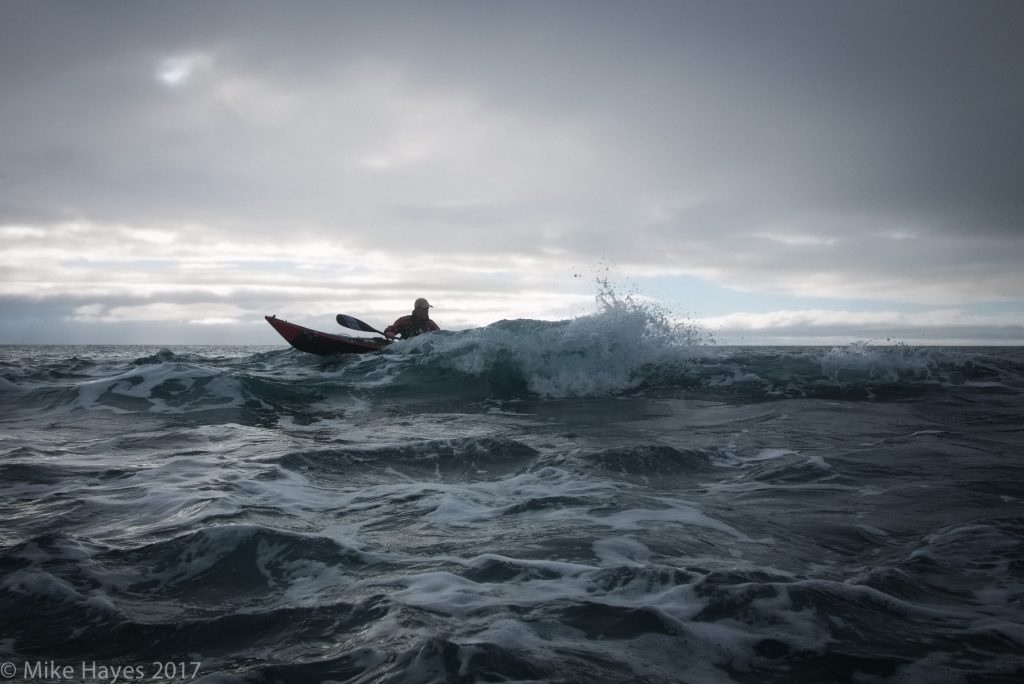 The winter lighting was lovely… 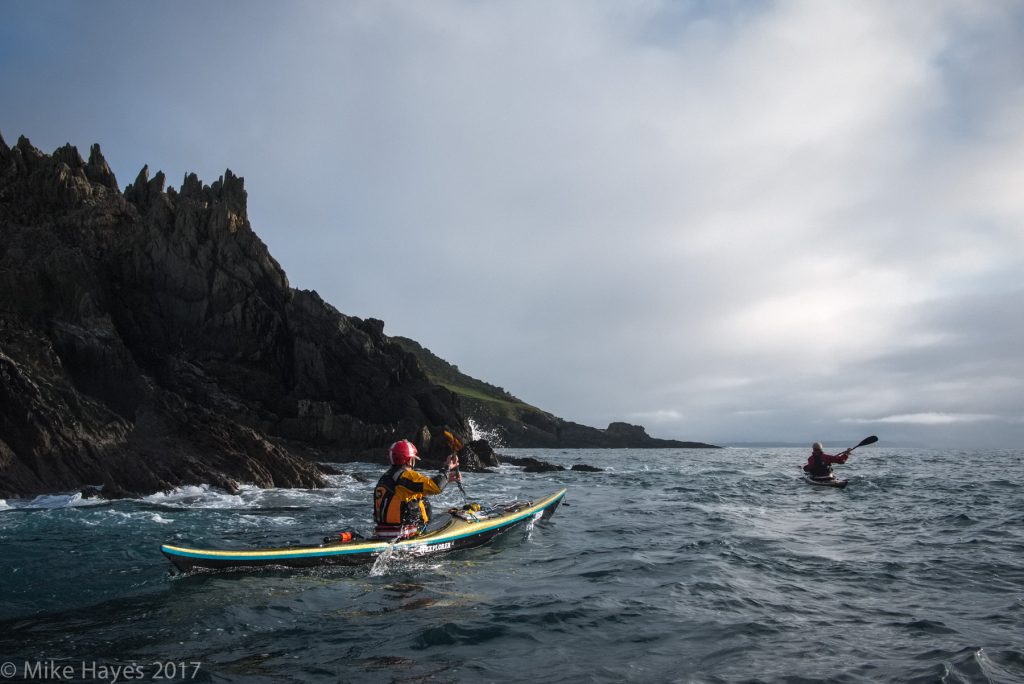 .. but as the cloud lifted a little more the lighting from the low January sun was wonderful. 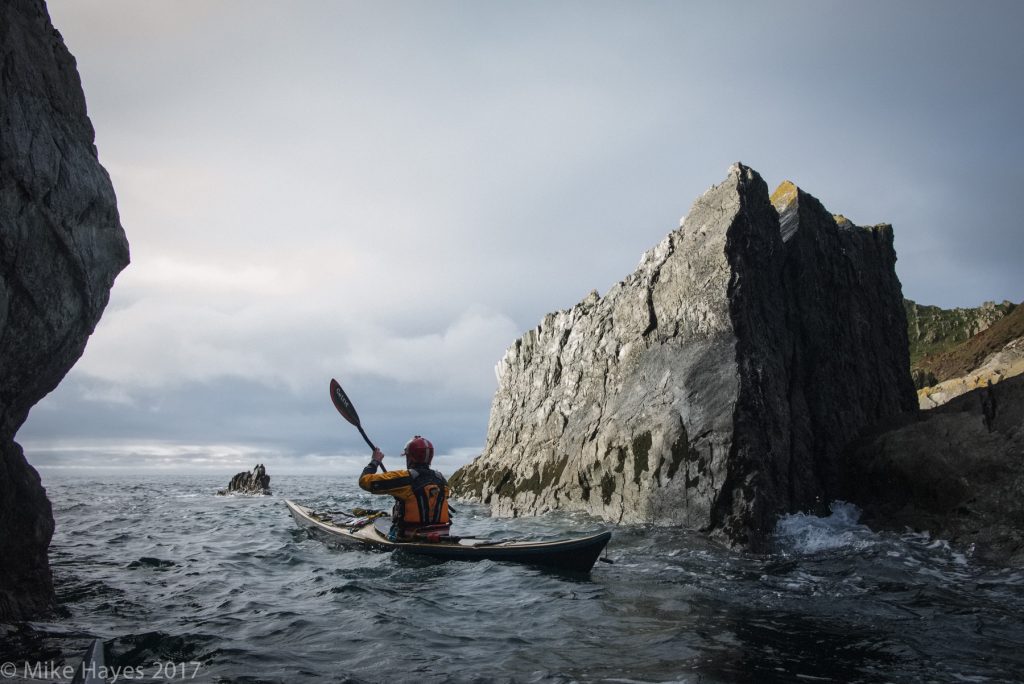 It’s a really great bit of coast with some super rock-gardening. 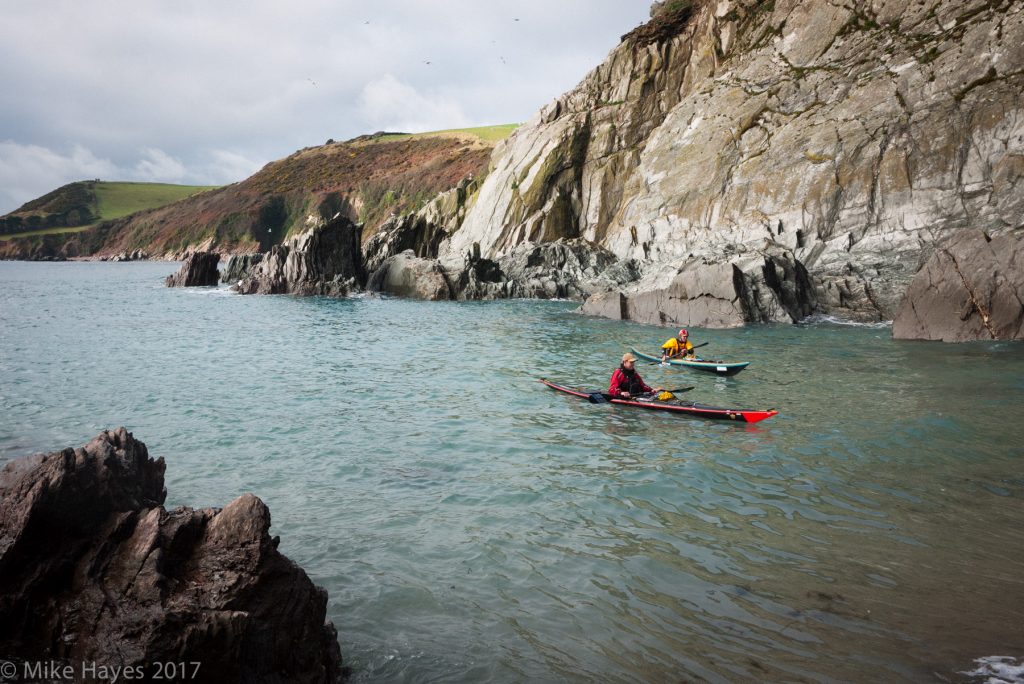 A sheltered cove for lunch. 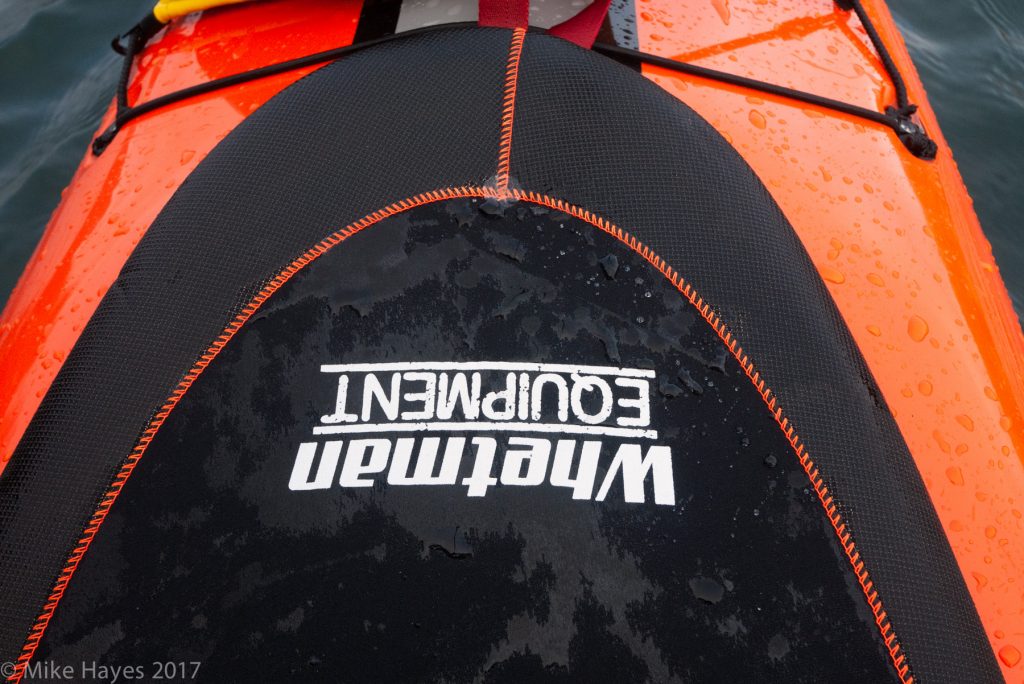 New Whetman Equipment spraydecks. These are of the highest manufacturing quality I have ever seen in a deck. I must also point out that I receive no benefit from saying that, either financial or in terms of enormous product discounts… I really need to talk to Steve about that.. ;-) More on the decks here. 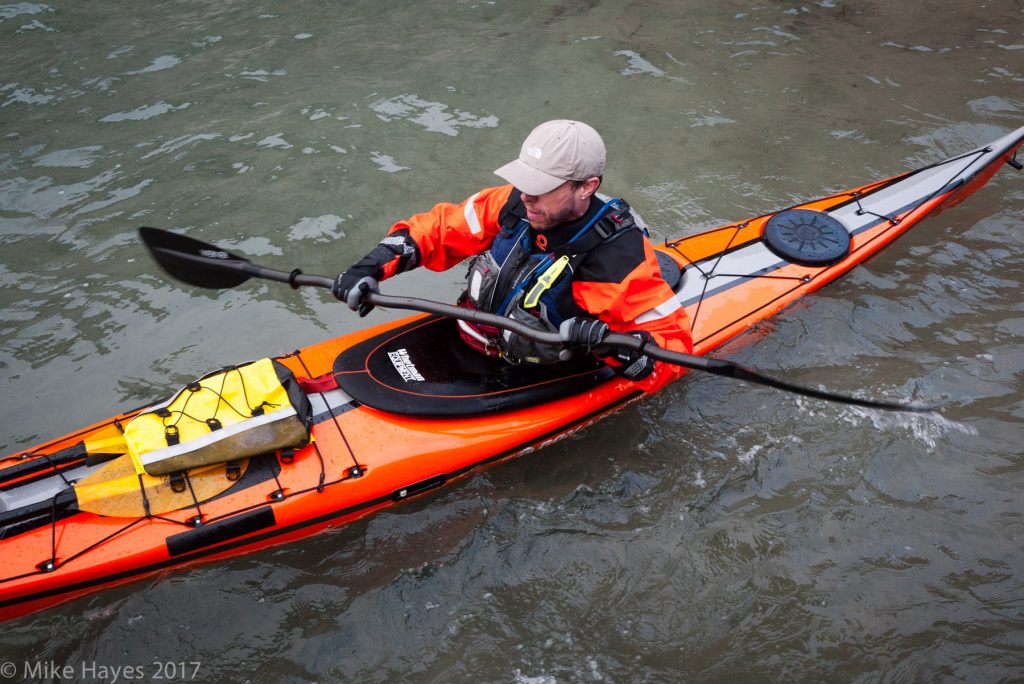 It is pure coincidence that both my drysuit and the stitching on the deck match my very orange kayak.. promise. I’m keeping my horribly colour clashing buoyancy aid just to make that point.. 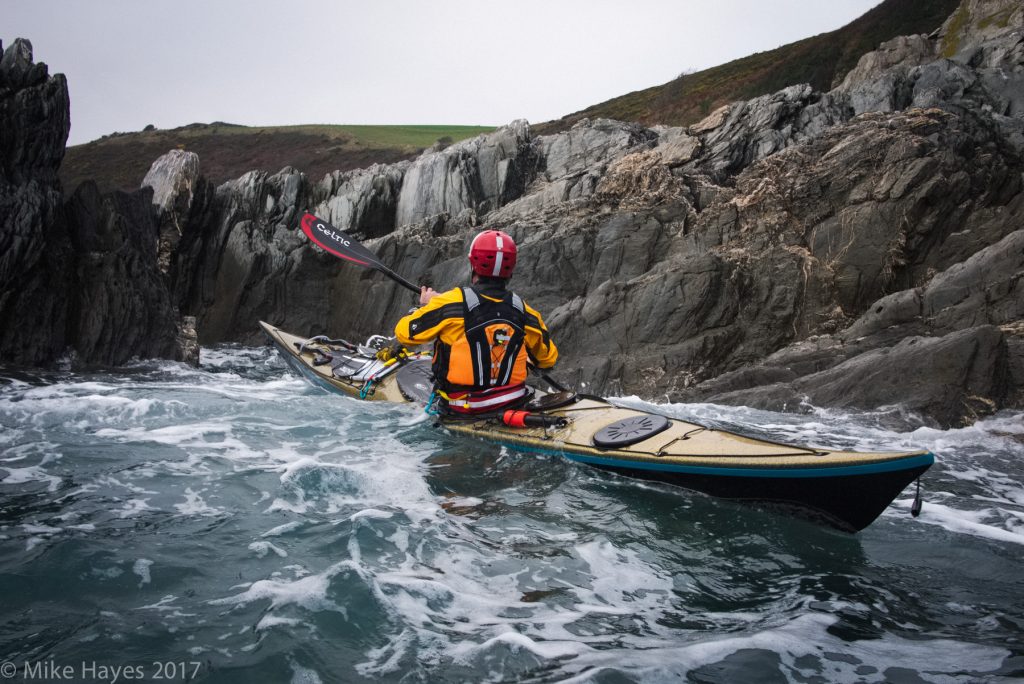 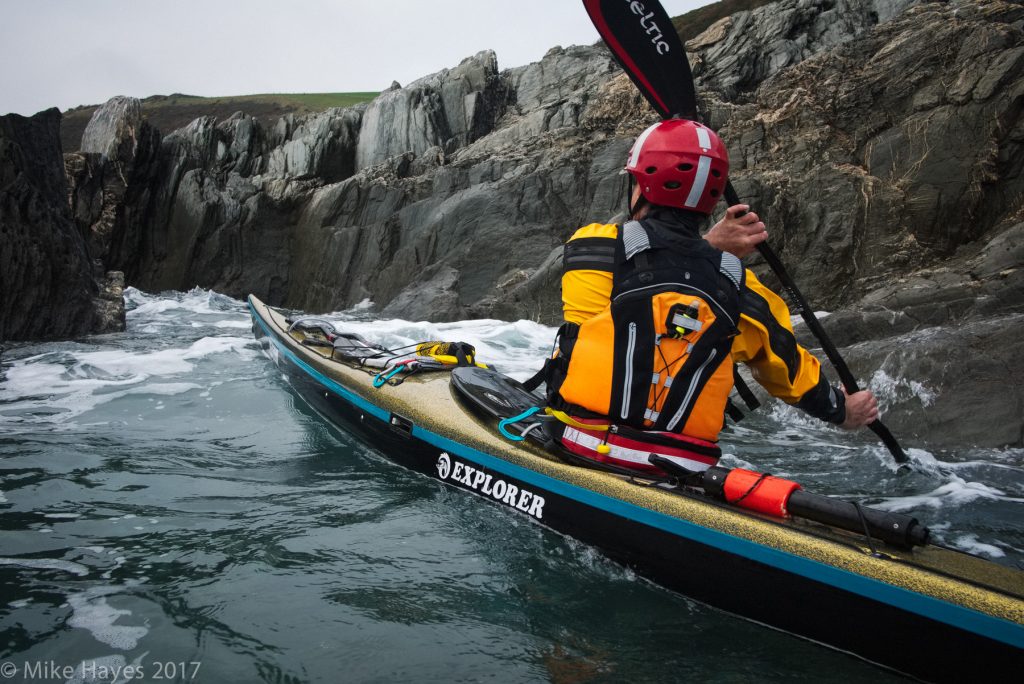 The ‘disco glitter’ finish on that Explorer shows up well here. I really like that the SKUK kayaks can be delivered in a ‘whatever the heck you like’ finish. Talk to British Sea Kayaks if interested :-) Yeah I know, shameless plug. I’m trying to build up some brownie credits with my friends ;-) 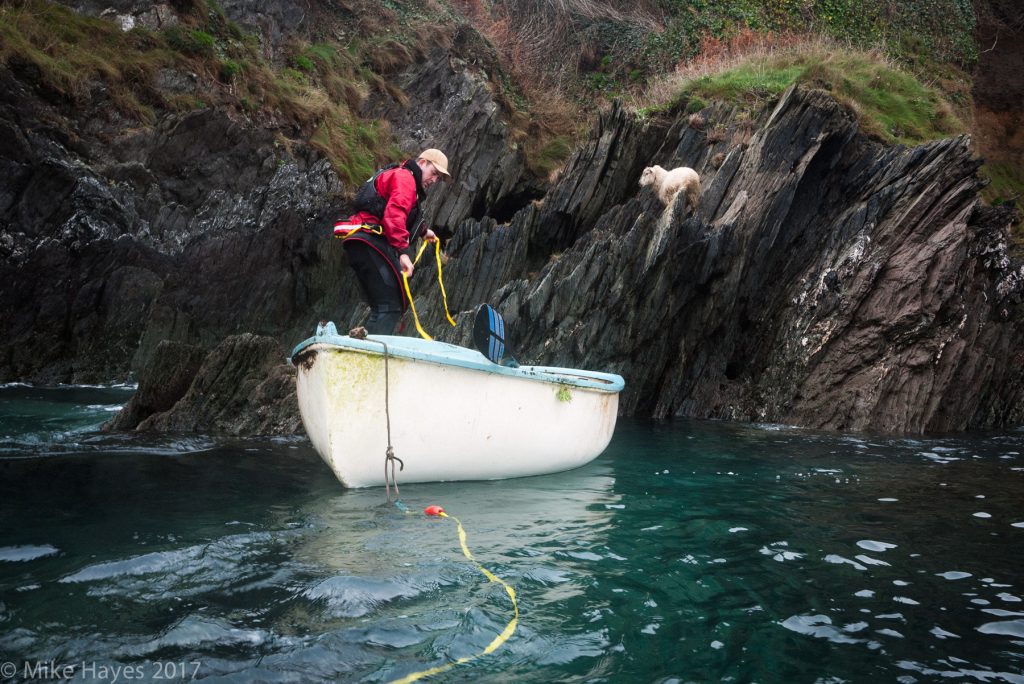 Anyway, the bit you’ve all been waiting for… the sheep. On our way home we came across a sheep that had tumbled down the cliff and broken its leg.. horribly broken, a really nasty compound fracture. A chap out walking had made the discovery but with the situation of the sheep was powerless to do anything. A rescue would have required either climbing gear or a boat… with no agency in a position to help at that point (calls were made) an old fibreglass dinghy was borrowed from a nearby cove. It was upside down in the weeds at the top of the beach and presumably belonged to the nearby holiday park. Figured nobody would mind so that was towed around to the casualty.. 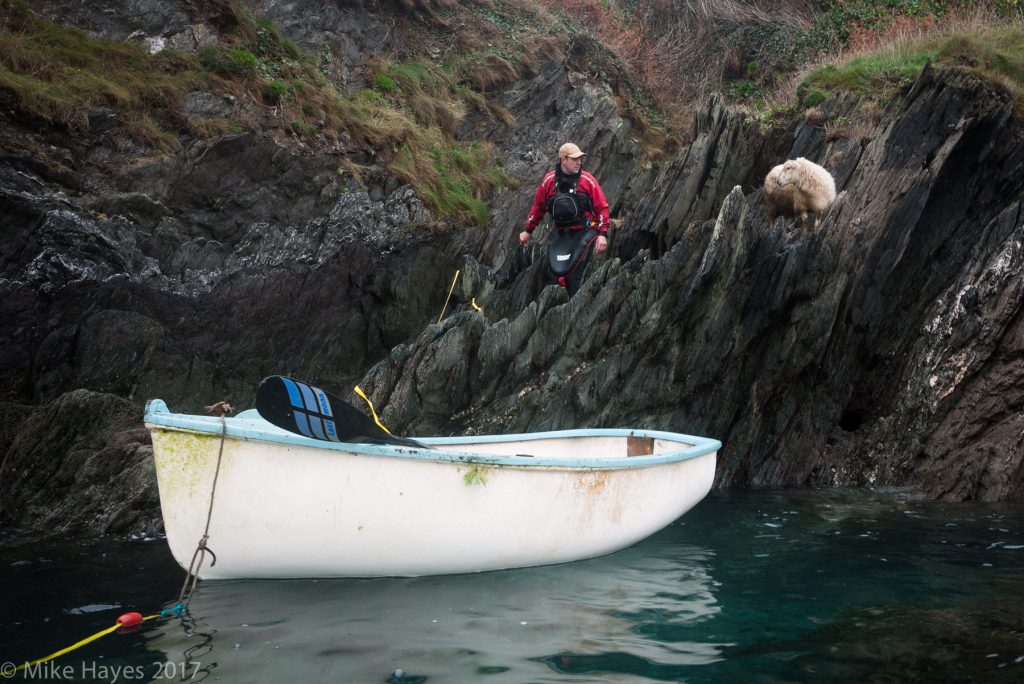 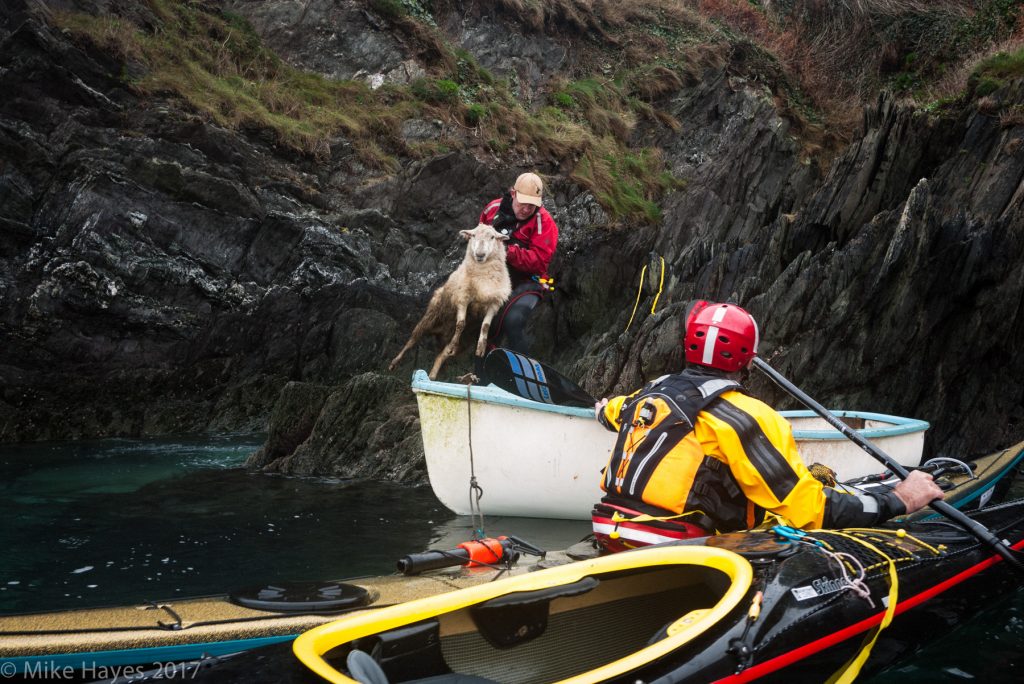 Steve took on sheep handling duties as he apparently was the most sheep-experienced of all of us ;-) There’s a claim to fame… (his dad has some in case ‘ewe’ were wondering.. f**k, sorry..). The sheep was quite happy in the dinghy until Steve hopped in… 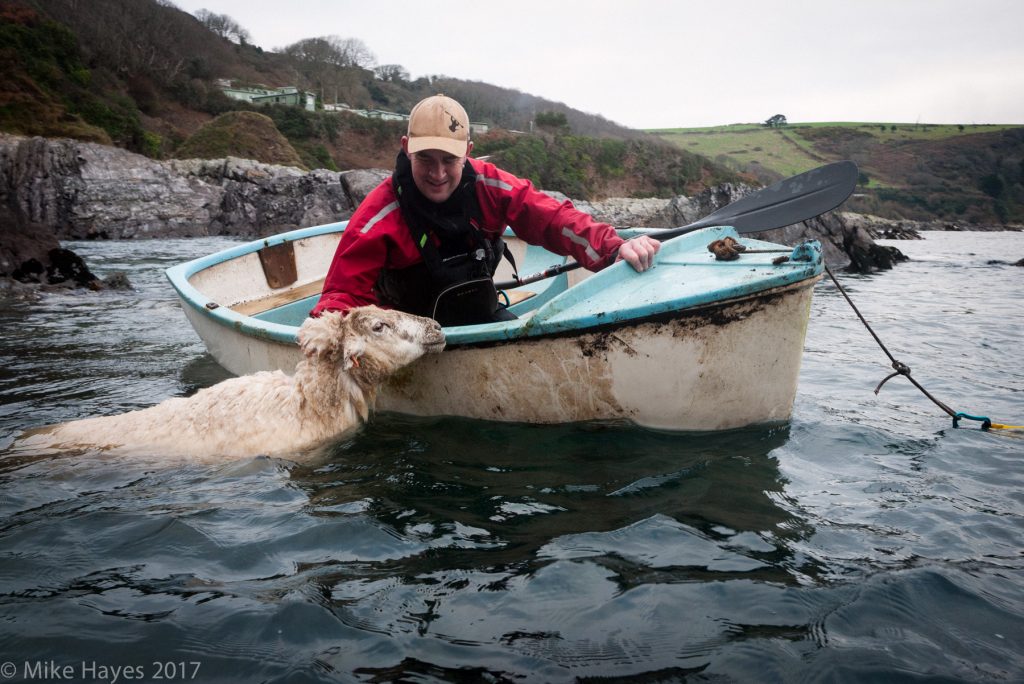 ..at which point she suffered a decisive ‘screw this’ moment and jumped out, turning the surrounding water a muddy, turdy shade of brown as the accumulated winter grubbiness washed away. Happily, while not being of optimal aquatic design, sheep can swim, although they do try to avoid it. Supported by the scruff of the neck she was quite happy swimming alongside the dinghy while being towed back to the nearby beach. 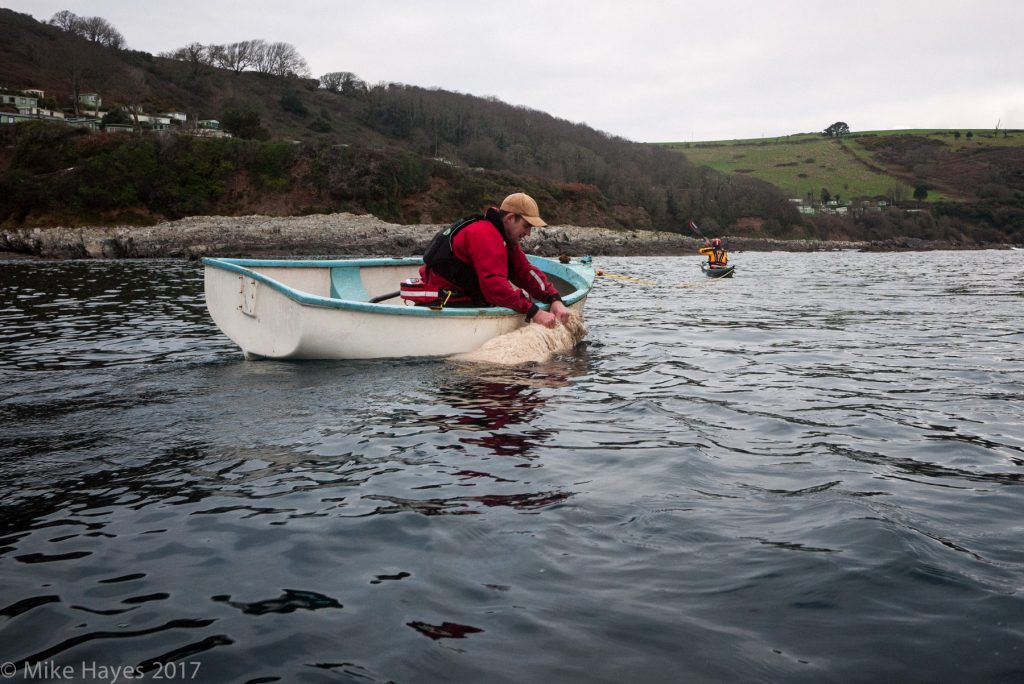 In retrospect, if ever in this situation the dinghy is probably unnecessary, just get the sheep in the water and support it from your kayak while under tow. The whole point of getting her to the beach was that access was easy and there was grass to keep her happy. The RSPCA called the hiker back and said they were trying to locate the farmer and would be on their way. The break was really nasty and it may well be that the sheep is put down, or maybe it can adapt to tripod living. Don’t know, either way better than suffering a lingering death trapped on a rock. 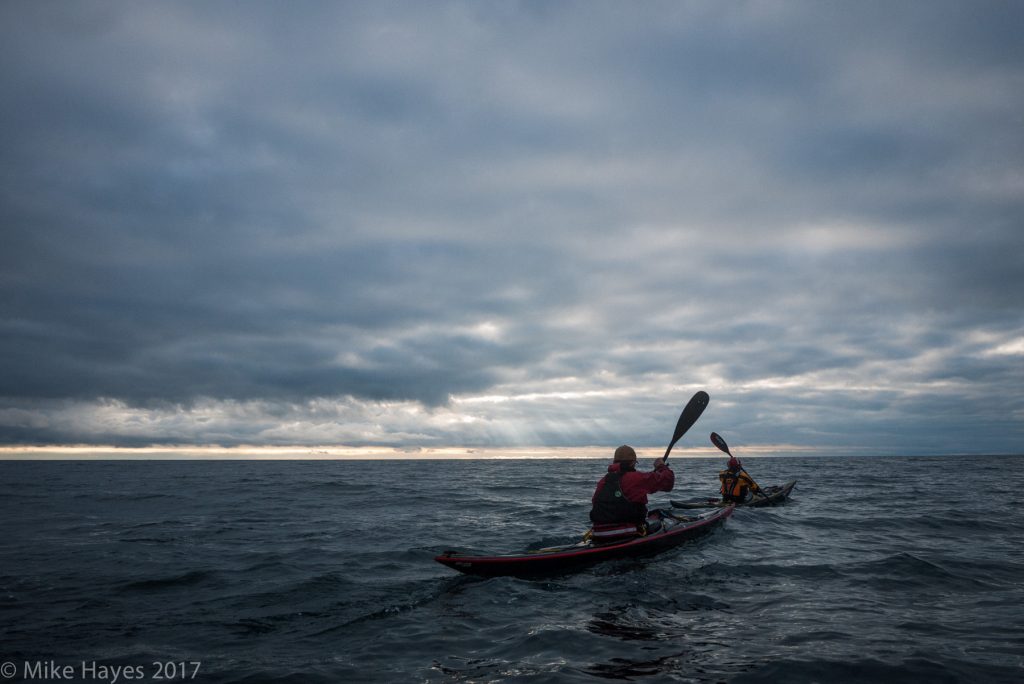 Time was getting on after all that so a beeline was made for home as the light began to fade. 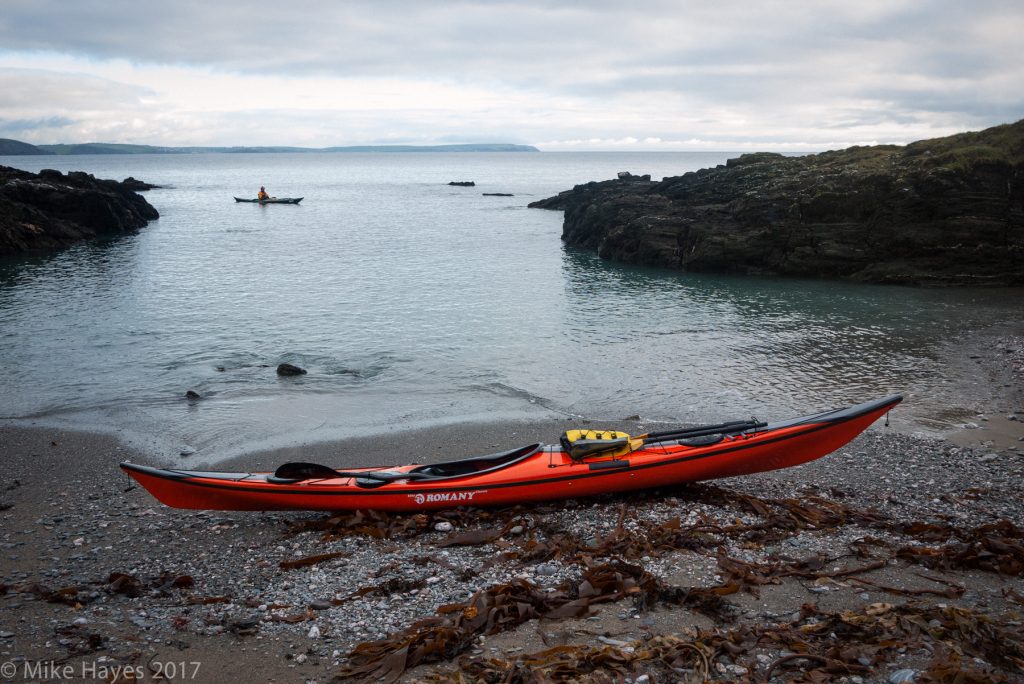 Gratuitous SKUK Romany photo.. I do find it quite interesting to reflect on how, after years of paddling and experience of many kayaks I’ve come almost full circle back to one of the earliest ‘proper’ sea kayaks I paddled. Compared to some it is low tech and distinctly unpretentious but fits me just brilliantly, does everything I need it to do really well, it’s strong & ‘chuckaboutable’ without being too slow,  is superb in rough conditions, great in surf and tideraces.. and doesn’t cost loads. It is also pretty.. admittedly the deck bag I use for stowing my camera is ugly but you know.. practicality ;-) At some point in the future I’ll need another expedition-flavoured kayak I expect but for now this does absolutely everything very well indeed. A design that got it right from the beginning I think.. the Romany has been around decades now and is very much a British Classic.