The network of dirt roads around San Agustin is fantastic for exploring on a bike… so that is exactly what I have been doing this last couple of days. There are a number of archeological sites scattered around the hills… some of the statues are supposed to be 4000-6000 yrs old which is just amazing. You can read more here. Some of the ones that have been buried for all that time still have paint on, like this fella here: 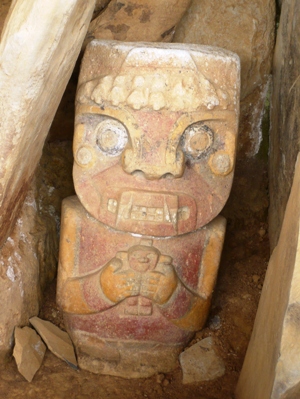 The dirt roads are interesting for riding in themselves, aside from being a good workout (i.e very steep) the countryside with it’s little farms and shacks is very beautiful. As usual there are stories floating around about there being some risk associated with exploring alone but all I met were a few nice folk on horseback who pointed me to the interesting places. To be honest here I think is probably no bigger risk than anywhere else on the continent (though I wouldn’t say the same for example of the areas around the Ecuador border… Putamayo province for example is still in a state of “war” pretty much), possibly less risk from the point of view of simple robberies….. One day I imagine the tourists who frequent the north around Cartegana and Santa Marta will filter their way south. I cannot begrudge the locals the income that will bring but I just hope the folk who visit are as nice to the locals as the locals are to me……. for example I just walked around the corner after lunch and a guy on a motorbike pulls up and says “hello”, I’d never met him before but he says “hey, I saw you on your bicycle, are you travelling my country on a bicycle?”.. I said yes so he just says “cool, I wish you the best of luck and welcome to Colombia” and that was it, he drove off….! 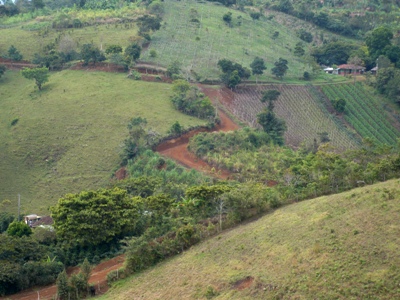 We had a lot of very heavy rain yesterday afternon and overnight which has been a good think for the dirt tracks.. although a bit sticky the surface is better for riding, I’m amazed at home well the Panaracer tyres work off-road, even on the really steep grades on mud, rock or loose stuff. The carcass is very flexible so with lowered pressures they just seem to suck the ground.

Oh yes, with reference to my last post below I have my trailer back… it’s still badly knackered and I have to do something to the webbing this afternoon before i can load it up but the guy I left it with has put some steel rod in place of the carbon. It’s not ideal because it isn’t springy like the carbon so I will still have problems with rubbing unless I pack very carefully but considering where I am and the materials he had it’s brilliant. He only wanted $4 so I gave him $5 (hey, it’s all relative…….!) now I can get to Bogota (I hope). Just about 800km to go including detours I want to make, but if time i will make another small 400km or so loop to the north around Villa de Leyva or something, depends on the motivation when I get to Bogota which is by all accounts a fantastic city…. 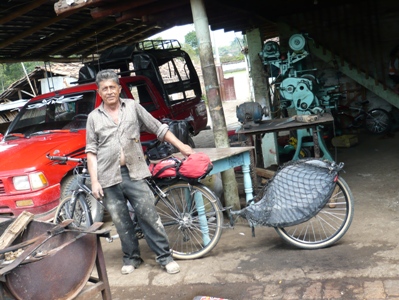 I also must mention the breakfast up at the Finca El Maco… being a cyclist I’m an embarrassingly breakfast-centric person, I look forward to it right after dinner the night before… my dreams are filled with porridge and dried fruit… (OK, maybe not that bad). But here I am having the best brekkies I have seen in S America (and better than anywhere else I have been in the world to be honest). Every morning there is a heap of oven-fresh soda bread and homemade strawberry jam, a big bowl of fruit (usually mango, papaya, apple, banana, strawberries) with granola and thick unsweetened yogurt from the farm. The milk for the excellent coffee is hot and also comes from the farm… The coffee really is brilliant and there’s always a huge pot of it…. heaven. Breakfast aside this is a good town for food, the main midday meal “comida corriente” seems of good quality all over town for just $2 or $3 and folk eat salad here… at last!!

final thought for the day… why is it that many young “backpackers” feel the need to look and behave like tw@ts… ? I’ll clarify, there aren’t many here but I saw plenty in Ecuador.. I just watched a gringo get off a bus… dressed in a fur coat and baggy shorts down around his knees, one of those tall multicoloured “top hats” you get at fairgrounds and scruffy dreads.. (nothing wrong with dreads, some look great but these just looked like a health hazard)… maybe I am a snob, but I have nothing against self expression but is it really any wonder that in the more touristed areas of South America most gringos are regarded as being stupid? It hasn’t happened in Colombia yet but certainly in parts of Ecudaor it has. I spent many many month on the road in my 20’s but strangely felt no need to behave like a w@nker…. OK, rant over :o)