** there’s an article about Shelterbox in Haiti on the BBC news site here: http://news.bbc.co.uk/local/cornwall/hi/people_and_places/newsid_8472000/8472093.stm scroll down the page when it opens for news updates and links to pictures ***

Before I write about the last couple of days can I just say… to everyone who made a donation and left me a message on my Just Giving page… thank you :-) You have no idea how much it means to me, not just the ££ but the little messages of support too. The ££ are going to make a big difference to a lot of people who are having a pretty rough time in life.

Anyway, today I’m squatting on the wifi in a cafe in San Martin de Los Andes… arrived here a couple of hours ago after an easy 50km on deliciously smooth asphalt :-) It’s a bustling little town with more of what I have come to think of as the local style of “chainsaw architecture”… It’s hot too today, thankfully the beer here comes in litre bottles, ice cold of course :-) Whether I am capable of riding back to my camp after this remains to be seen… I also met an Argentine cyclist today, he tells me north of here it all turns to desert with bugger all for 100’s of km at a time so he recommends I go back into Chile… but I’m quite looking forward to the challenge of that and have no desire to cruise up the Pan American across the border in Chile.

So, back to yesterday’s words:

One of the downsides of travel is the goodbyes, myself, Juan & Eli became good friends very quickly, just one of those situations where kindred spirits find instant rapport…. it was something of an emotional parting, a very good memory however :-) I am sure I will see them again some time. The journey on from Valle la Angostura was fun… I didn’t get all the way to San Martin de los Andes in one go, it’s about 110km which is within easy reach on normal roads but the first 55km today was quite a difficult stretch on a bike… quite mountainous and on a very rough, dusty road…. of course now, sitting on the grass under the trees by my tent next to the lake (hehe) with clean(ish) clothes and the dust washed off it all seems like a brilliant adventure. The road from Valle la Angostura is also the main route through the ‘Parque Nacional Nahuel Huapi’ so has a lot of traffic, at times the dust from passing trucks and cars was so thick I could barely see my front wheel. It’s a funny thing how “living the dream” involves long hard days on a bicycle under a baking sun, caked in thick dust, sweat and sunblock.. :-) 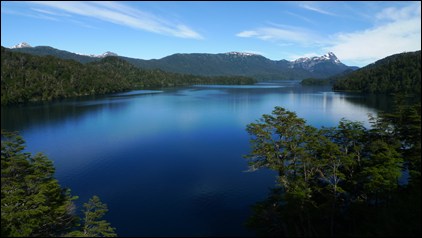 I averaged just 15km/hr for ths stretch, not that I’m complaining, the scenery was fantastic… thick pine forest, snow capped mountains, cobalt blue lakes….. I didn’t really stop along the way, everytime I paused to eat or filter some water from a stream I became dinner for big biting horseflies… monsters! 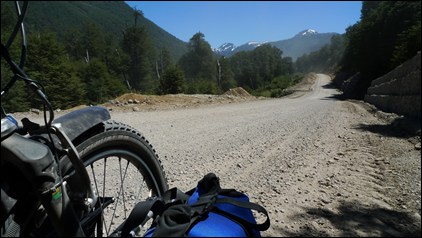 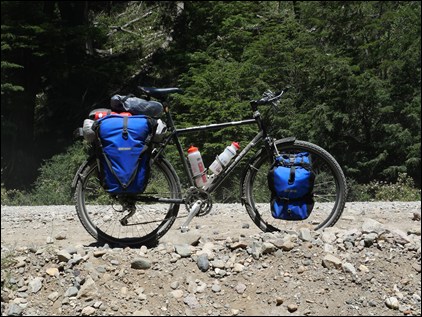 The end of the ripio was magic, but with 50km still to go I was worn out from the heat, the climbing and a beating from the road so spotting a fab spot to camp on a shady patch of grass by yet another beautiful lake I rolled to a halt for the day. Both me and my bike were a dusty brown colour and shaking my head released clouds of the stuff from my hair, lol. I’ve since been for a swim, rinsed my gear, checked the bike over from it’s battering this morning and now just typing this while waiting for my iPod to charge from it’s solar panel :-) I’m also looking forward to an early night…. 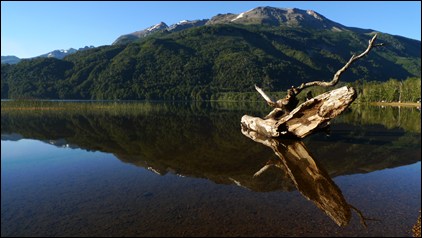 Many times on days like this I think how amazing it is how a bike can carry you for 1000’s of km over incredible terrain with nothing more than some, or rather a lot of food and water to keep you going… also amazing what the human body can do I think if you need it to.. and age it seems is no barrier, I must mention a couple of Dutch cyclists I’ve been meeting on regular occasions since Entre Lagos… two ladies in their sixties out here on their bikes making a 4 week tour of the lakes.. they’re not camping which lightens the load and taking their time but what can I say… brilliant :-) Was rather covetous of the Rohloff hub on one of the bikes after my drivetrain became caked with dust today with subsequent chainsuck problems :-| I also met another cyclist today, an Argentinian chap… his figure emerged from the dust cloud earlier this morning travelling in the opposite direction to me.. Luis has been on the road more than 200 days now making a tour of all Argentina’s national parks… it’s a big country and there are a lot of them… Terrific to meet him.. and you can too – he has a website http://www.cicloviajes.com .

Ok that’s it for today… and I have no idea what day it is either, life is deliciously simple now:-)

3 thoughts on “on from Valle la Angostura”