I haven’t written much of any use to anyone since I returned from South America so I think maybe it is about time I made the effort to generate some meaningful (relatively…) ramblings … so to that end I’ll occasionally write about some of the kit I used on that journey beginning today with my camera….

I remain very much dedicated to film and my manual rangefinder cameras … but there was no way I was going to carry 5 months worth of film in my panniers… I had 2 months worth with me in Colombia & Ecuador in 2008 and that was bulky enough… I can’t remember exactly how many rolls I took but it would have been at a minimum somewhere around 40. So with that in mind back in December last year I had to bite the proverbial bullet and ‘go digital’. I chose a micro-4/3 format Panasonic Lumix GF1 with the additional electronic viewfinder and 20mm (40mm equivalent) f1,7 lens. The primary drivers being that as a package with that lens the camera has a very similar form factor, albeit slightly smaller, to a 35mm rangefinder , and that fast 40mm equivalent lens is very close to my favourite 35mm/f2 lens I use for street photography. The electronic viewfinder is a separate purchase.. and it’s not exactly cheap… but I hate shooting with an LCD on the back. The pics below show the GF1 with 20mm lens and viewfinder alongside a Zeiss Ikon with a 35mm Biogon lens. 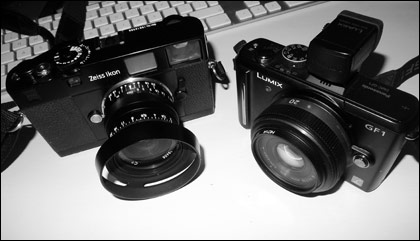 Now this isn’t a ‘review’ of the camera, it’s been around long enough that there are plenty of those already available.. in particular I’d recommend this one on The Luminous Landscape here. Rather what I’m trying to do is give a brief perspective on it as someone who prefers to shoot manually with film and prime lenses… and from the point of view of taking it on a long bike journey where size/weight and battery life are important considerations. 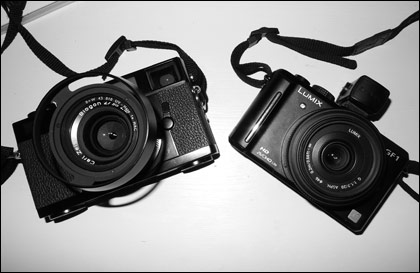 So.. what is like to use? Really nice is the short answer. The less short answer is that as a substitute for a film rangefinder it works brilliantly. The similar form factor with the 20mm lens and EVF means I can use it in exactly the same way – wandering around with it cradled discreetly in the palm of one hand down by my side with finger poised on the shutter release. I used it in this way with both auto and manual focus modes – the autofocus slows things down a little but it’s not cripplingly slow.. switching to manual focus I just set to ‘zone focus’ so I can photograph quickly. Program, shutter & aperture priority modes are available.. but I only ever used it in aperture priority simply because it’s the closest to the way I work with film. 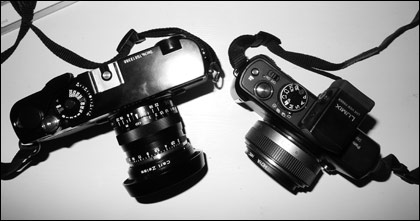 Image quality with the lens mentioned here is very good… no problem with sharpness but what really surprised me was the excellent shadow detail and the almost luminous quality to some of the images… it’s a characteristic I had only ever associated with Leica and Zeiss prime lenses and while nothing IMHO will ever come close to matching that the little f1,7 lens and GF1 does a pretty good job. 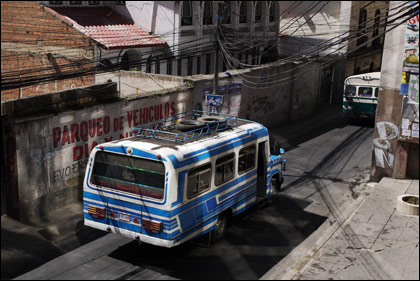 As a camera for the touring cyclist it’s perfect – small, light, seems robust – I mean I failed to break it despite some solid efforts and it stood up just fine to thousands of Km of shaking on rough dirt tracks. The battery life is very good, Panasonic quote somewhere between 400-500 frames on a full charge depending on whether or not you use the LCD on the back or the EVF and how much flash you use. The battery retains it charge very well too, I didn’t bother with a spare battery – instead relying on being able to find somewhere to charge it every few days and had no problems at all.

The only critiscm really is the accessory viewfinder. It uses a tiny LCD which is limited in the quality of image it displays – i.e poor dynamic range and quite pixellated.. I got used to it and it serves its purpose well but on occasions that I was asked to take a pic using an SLR with optical viewfinder, having used nothing but the GF1 for a few weeks, the quality of the optical viewfinder image took my breath away. Can’t have it all  , after all it is a fraction of the size and weight of a digital SLR and image quality is virtually indistinguishable unless you’re thinking of really serious enlargements.

As a footnote plenty of other lenses are available for the camera and it can also use micro-4/3 lenses from other manufacturers (with some limitations on function).. most obviously those from Olympus for the EP1. There is even an adaptor for mounting Leica M-mount lenses which is a terrific idea.. I haven’t bought one though as the 20mm lens shown here suits my need perfectly 

If you want to see more nice cycle-touring pics taken with the GF1 check out Cass’s blog here.. he has a few lenses with him – not sure which but we both agree it’s a brilliant camera for the pedal-powered traveller.