an update on the carbon fin project is in order I think.. mission success if you like.. (previous posts on making the blank and the mould here <link>)

I’m still playing around with the layup of the fin shells but this first fin has 5 layers of carbon at the root tapering to 3 at the tip. The root area itself is filled out to the rectangular profile using scraps of carbon with a random fibre orientation – worked great. The whole lot was vacuum bagged using a rubble bag sealed with PVC tape – I did use proper peel ply and breather material however.. The valve is another homemade lashup using a threaded pump adapter, a flanged nut off the back of a chainring bolt and some rubber washers hacked out of an old inner tube. Works just fine. 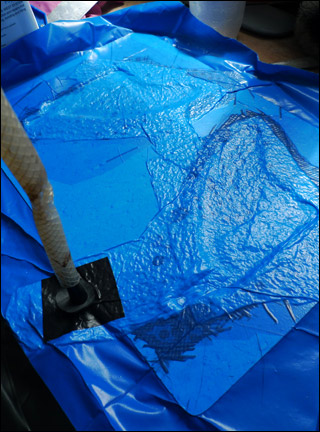 mould and fins in the vacuum bag.. all a bit heath robinson but it works great

The fin halves were trimmed while the resin was still ‘green’ but once fully hard they popped out of the mould beautifully light and very stiff. Where holes needed to be drilled in the root for mounting hardware I just made an internal fillet using a epoxy mixed up some finely chopped strands of carbon – carbon ‘fluff’ if you like.. a pair of scissors and a fingerful of scrap cloth. When the shells are joined these areas will be solid. 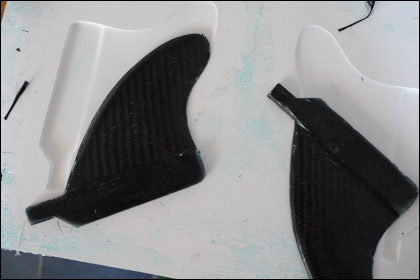 fin shells fresh from the mould

After rubbing the shell interface flat using some 120 grit paper taped to the bench the shells were joined using more epoxy mixed with ‘carbon fluff’. Clothespegs held it all together while the epoxy went off. In terms of finishing I didn’t do much figuring this is just a prototype and may well get trashed very quickly.. a quick rub down of the joint and general cleanup with some fine wet sanding. The finished fin is quite light and incredibly rigid, I can’t put even the tiniest amount of bend in it. It feels bombproof but only time will tell how durable it is. 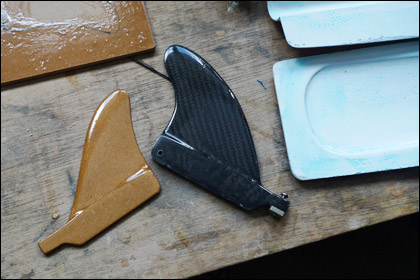 the finished fin with another fin blank - a smaller, skinnier central fin for my XS. The white things are the moulds for another Greenland paddle..

It’s great for me as I can mess about with different shapes for different conditions without spending anything more than a few hours work. 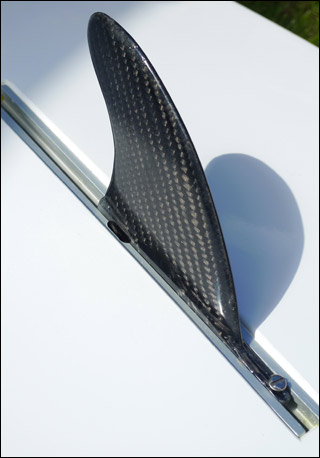 So there you go.. a bit of fun. Now I think it is time to plug my book again.. Sixty Degrees of Latitude. If you haven’t already go and read my previous post…

p.s a friend asked me why I didn’t use a foam core instead of doing it this way. While I think a foam cored fin would be fine for surfboard or SUP use I don’t think it would be tough enough for a surf kayak. Making the fins the way I am means I can add internal reinforcement and play about with the fibre layup without changing the external dimensions.