I’ve just finished making myself a second carbon Greenland paddle. The first one has been a great success, very nice to use – comfortable and very efficient, and has proven itself more than tough enough. The reason for this new one is that I wanted to modify the blade profile slightly and vacuum bag the components rather than just rely on a hand layup.

Rather than start again from scratch I simply modified the original plugs and made new moulds. Saved me a lot of time. The vacuum bagging of the components has resulted in quite a significant weight saving, this paddle at just 600grams for a 2.19m paddle is noticeably more feathery than the last but using the same number of plies (4 of 200g/sqm twill carbon) ahould be easily as strong, probably more so thanks to better consolidation of the laminate. The only ‘issue’ I found using a vacuum bagged laminate is that the thickness is noticeably less than before, joining the blade components was an exercise akin to gluing paper sheets edge to edge so rather than joining using an internal fillet of epoxy/microfibre paste I’ve used an external wrap of bias cut carbon over the join. It looks fine but not quite as tidy. Still, it is a handmade thing and the delight of it is more in the using of such a light blade rather than the admiring of it… though that is nice too :-) 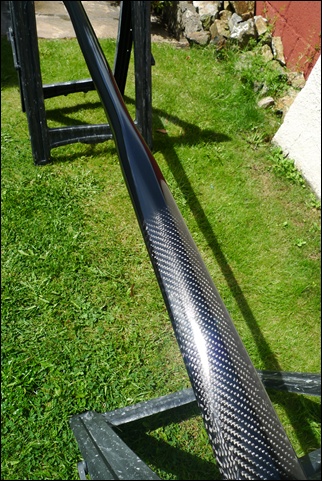 I'll get better pictures next time I head out on the water.. The black fade on the loom looks rather nice I think. Unnecessary but nice..

While I’m on.. an update on the carbon fins.. they are proving themselves more than up to task of withstanding rough launchings and landings and the performance improvement on the boat is noticeable. I’m very happy. I’ll write more about those shortly.. stay tuned!

p.s if you want to know why I’m not using the arguably simpler route of carving a foam core and laminating directly on that… it was simply an issue of cost, locally I could not get the styrofoam I wanted in quantities less than 70 or so sheets, and mail order courier costs plus small quantity orders were not economical.. so I made it hollow again. It makes a lovely paddle but is more work.

2 thoughts on “another carbon Greenland paddle”