This is very much in the realm of experimental, I have no idea if this is going to work out because of the fine detail in the moulding and the strength required so I’ll introduce the project and what I’ve done so far and then say no more until it is either a huge success or a miserable failure..

Surf kayak fins have a hard life, harder than the average surf-board fin because you have no choice generally but to get in the boat while aground on the beach so as well as dealing with the enormous forces involved while flying along a wave they also have to cope with being dragged through sand and pebbles, the occasional bashing from a rock and so on. A good fin also makes a noticeable difference to the performance of the boat.. a very stiff fin gives more speed and snappier response but is probably less forgiving. Commercial fins seem to run upwards of £60 for a decent composite model so I decided I want to be able to mould my own as and when I please with the potential of being able to flog a few to my surfing buddies..

Before I go on there is some useful fin theory over on the surfkayakskills site (link) or click the image below. By the way the site exists with the aim of helping to raise funding for the GB surf kayak team who did rather well at the last world champs and are headed to North Carolina for the 2011 edition later this year.. so do explore the site and if you learn something useful you can make a donation if you so wish. 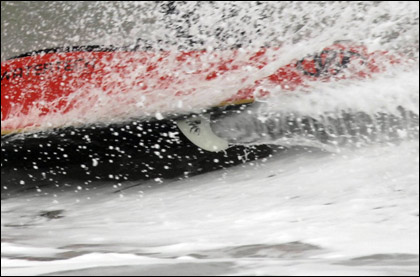 To the best of my knowledge most, if not all, commercial fins are made by simply laminating a slab of fibreglass to the desired thickness and then grinding to profile followed by polishing. It’s easy, fast and makes a strong fin.. but it is also wasteful and may well be why you don’t see carbon fins around… glass is cheap so turning it into dust is no big deal. I’m not into large scale manufacture so I decided I’m going to have a go at a proper moulded fin.. and I’ll make it out of carbon for a couple of reasons.. I have some left over from the Greenland paddle project .. and it looks cool :-) Initially I am just making the centre fin as this is the most complex – it is a symmetrical foil shape so needs two moulds, one for each side and also means I can test it for durability on my boat without having to make matching thrusters (the outboard fins in a 3-fin setup). The thrusters are a flat-bottomed foil so only need one mould each that can be mated with a flat slab laminated onto a sheet of glass or similar. 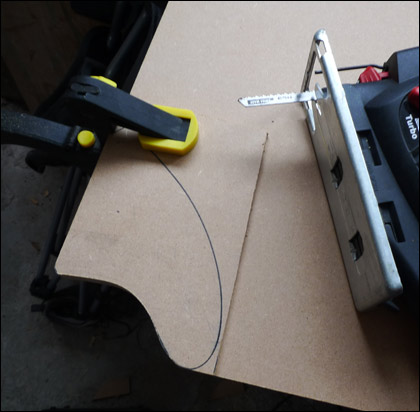 cutting the blank from a double layer of 5mm MDF

Using my existing centre fin as a pattern I cut a blank from 2 layers of 5mm MDF tacked-glued together. I’m using MDF because it is dirt cheap and easy to shape… though the downside is it is very porous so needs a high degree of finishing before I can take a mould from it.

The fin needs to be 8mm thick so the 10mm thick blank was shaved down to 8mm, 4mm each side of the centre join and then carved to a symmetrical aerofoil.. it’s all done by eye using a smidge of aerodynamics experience.. I knew a degree in aeronautics would come in useful one day ;-) In reality the shape isn’t going to be desperately critical so long as the maximum thickness occurs somewhere around 30% of the chord from the leading edge.. and that the leading edge is nicely rounded with the trailing edge tapered smoothly to a fine edge. It is not knife edge thin as the finished laminate needs a certain amount of thickness for strength. 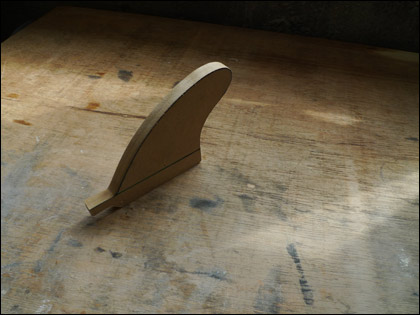 The carved and sanded plug was then split into two and finished with multiple coats of a shellac-based sanding sealer, sanding with fine paper between each. At this stage the process is ongoing, I want as fine, glassy finish over the porous MDF. I used the shellac stuff simply because I had some.. and it is very easy to cut back smooth. The downside is that it means I will have to use epoxy and woven glass cloth to make the moulds rather than a cheap polyester gelcoat & resin with chopped strand mat – the styrene in polyester resins, plus the heat generated during curing would likely trash the finish on the blank. The alternative would be to coat the blank in epoxy but that’s a bitch to cut back smooth, especially on such a small part with some fine detail. 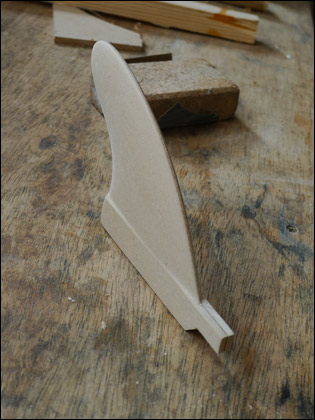 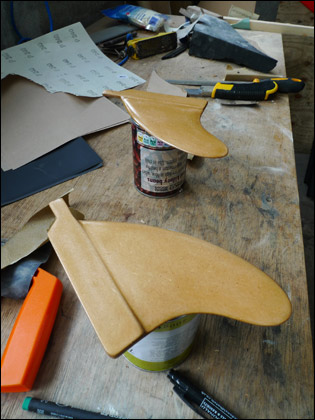 So.. from here.. the plan is to mount the blanks on a sheet of smooth acrylic, polish the lot with a mould release wax and make the moulds. Going to use epoxy and fine 200gr/sqm woven glass cloth to conform to the fine detail around the fin root. If that works out OK then I’ll make the fin halves using first a layer of very fine 80g/sqm glass to fit the fine detail, followed by 2 or 3 layers of carbon twill cloth, maybe more cut to fit inside to taper the thickness of the laminate. The outer layer of glass will ‘disappear’ when wetted out and as well as helping to fit the detail will add a layer of protection/finish over the carbon. I’ll also add some local reinforcement around the root of the fin using some unidirectional carbon tows. The whole lot will be vacuum bagged. In theory that should leave me with two nicely moulded fin halves. I’ll glue ’em together using an epoxy/milled fibre mix to give me a fin that is hollow around the root area. I have to drill holes through the root so with the fin inverted I think I’ll just fill the remaining void with epoxy and let the whole lot go off hard before cleaning up the edges, drilling and polishing… In theory.

Even if it doesn’t work out it’s still worthwhile.. I’ll learn something along the way and I like making shit anyway. Could be interesting.. stay tuned :-)

p.s in case you’re wondering where the general cycling flavour of the blog has gone of late… haha, yes I am still riding lots and still as interested as ever but nothing has changed in the fleet of late, no new jewellery to play with  – that is the fault of my DeSalvo fixed, it is ‘perfect’ and requires no ££ to be expended.. and it’s easy to play around making relatively simple parts for kayaking where the safety implications are less critical – other than a broken paddle say :-)

p.p.s as for the books.. well I’m expecting the first hard copy of Sixty Degrees by the end of the week.. and A Boatbuilders Story is ongoing happily.