Hard to believe it is just a few days ago that  I was sweating.. I mistyped as swearing but on reflection that too… at something like 35 degs C… and now putting up with temperatures more than 40 degs colder.. but more on that in a mo… Despite the cold very glad I didn’t choose to ride the Black Sea coast, saw in one tea shop that there has been heavy snow and some pretty heavy duty storms up there.

It took me a day longer to reach Eğirdir than I thought it might…. mostly due to a strong, bitingly cold headwind coming from the north east… and to a much lesser extent the small matter of some big mountains to get over. The mountains were great, the wind less so… but it was still an excellent ride….. 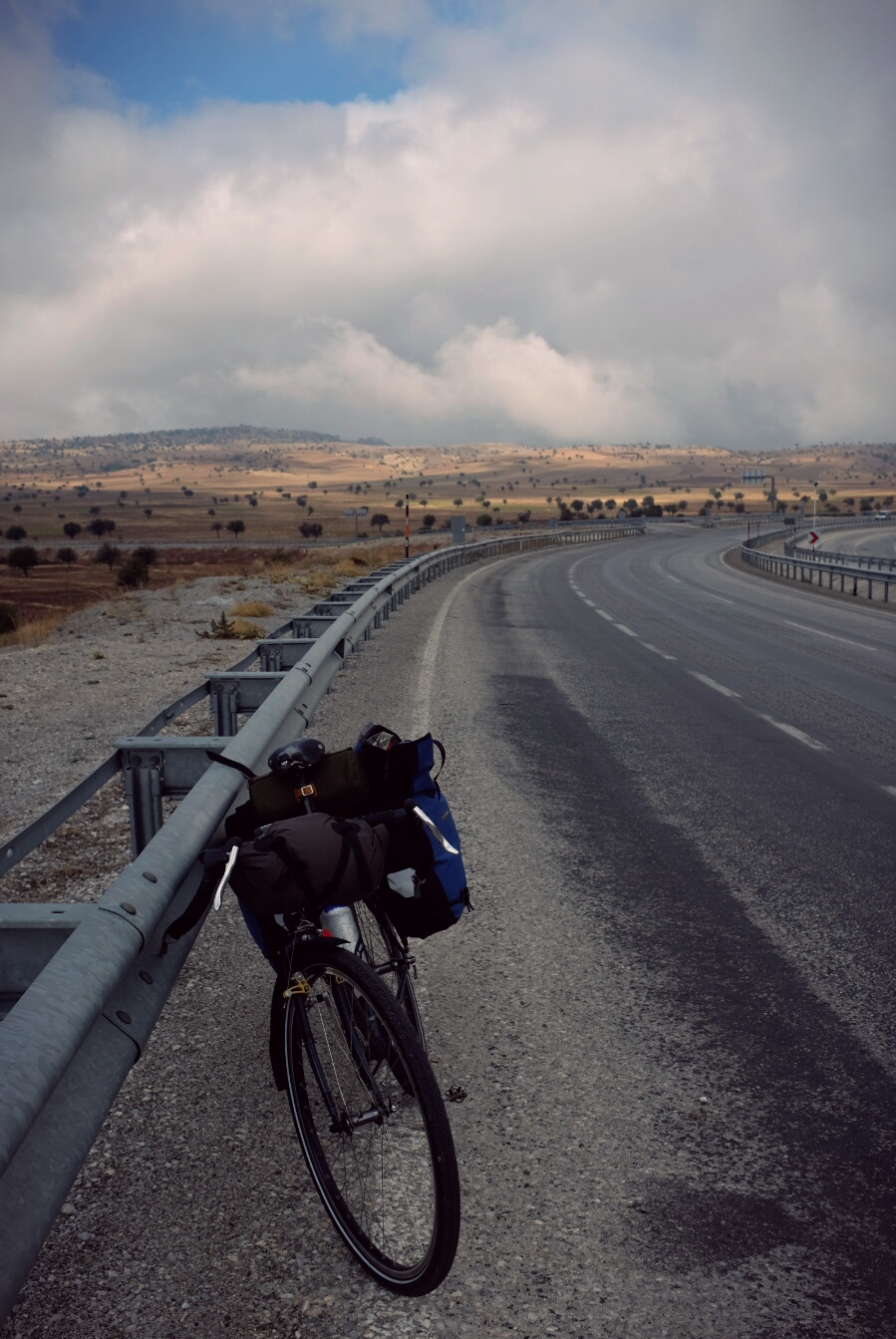 the mountain plateau above Denizli.. and the transition from thick, wet mist to…

Pamukkale hadn’t been much of a rest… running around up on the mountain and staying up late talking and drinking beer…so it was with rather empty legs that I trundled out of the village on a cold, misty morning to begin heading in the general direction of Egirdir. It was set to be the first proper climbing day of this trip.. and climb I did, once I’d threaded my way through the city of Denizli, sprawling below a wall of dark, mist-shrouded mountains…  I decided I’d need a coffee before really getting my teeth into the uphill stuff so stopped at a roadside cafe just as the road started to wind its way skyward. It was a very good brew they made for me… once again payment was refused so now wondering -when I’m going to be able to pay for my roadside refreshments… and how much of a shock it could be when I do :-) 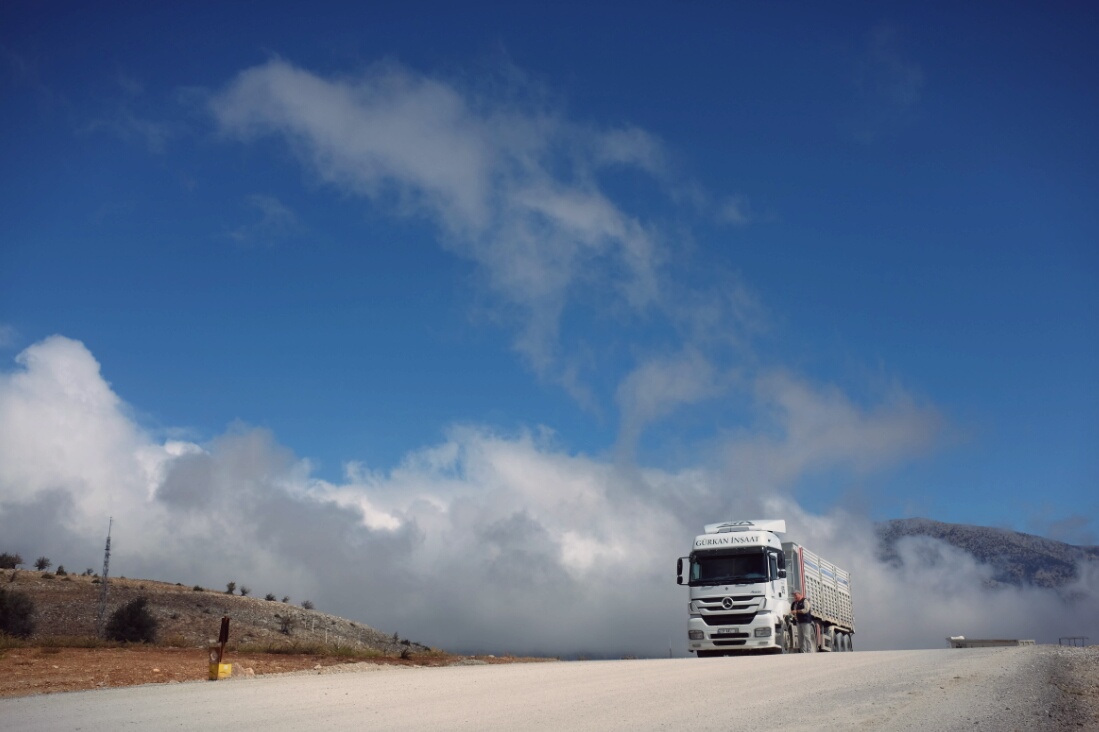 … bright sunshine and some dramatic clouds around the peaks

Some 20km of stiff climbing took me right up into the wet clouds through thick pine forest… it was one of those days when you simultaneously overheat and freeze in the damp cold. The transition then to a high, barren .. and sunny mountain plateau was remarkable.. I rode out of a wall of mist into brilliant sunshine and a clarity of air unlike anything I’ve seen in Turkey so far :-) 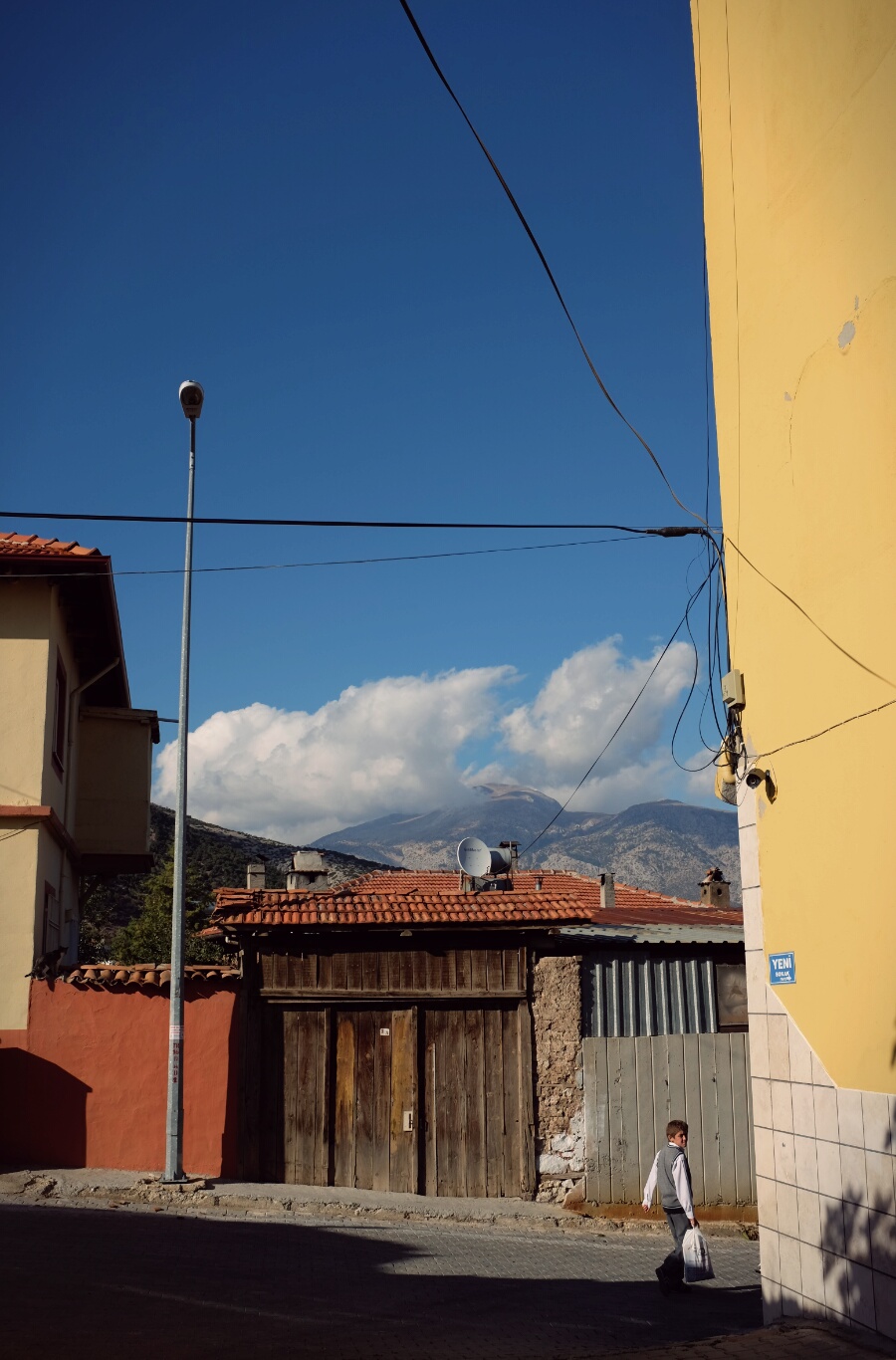 A steep, fast, and very cold descent brought me to the quiet little town of Serinhisar nestled in the chilly sunshine against the mountains. Riding into town in search of food I felt very much at home.. just a quiet town far off the tourist trail with some lovely people saying hello as I rode by… I was quite taken with the place and given my rather weary legs I wanted to stay for some time to enjoy the place and drink tea with the locals… so I did.  The only place to stay was a crazy (and empty) fake castle type place on the highway.. not super cheap at about 16 quid, but the staff were hilarious and no sooner had I showed up than the manager was riding my bike up and down the highway with a huge grin on his face. Meanwhile his sidekick, having taken a look at my dusty cycling shoes tried to sell me a very shiny new pair of brogues… :-) 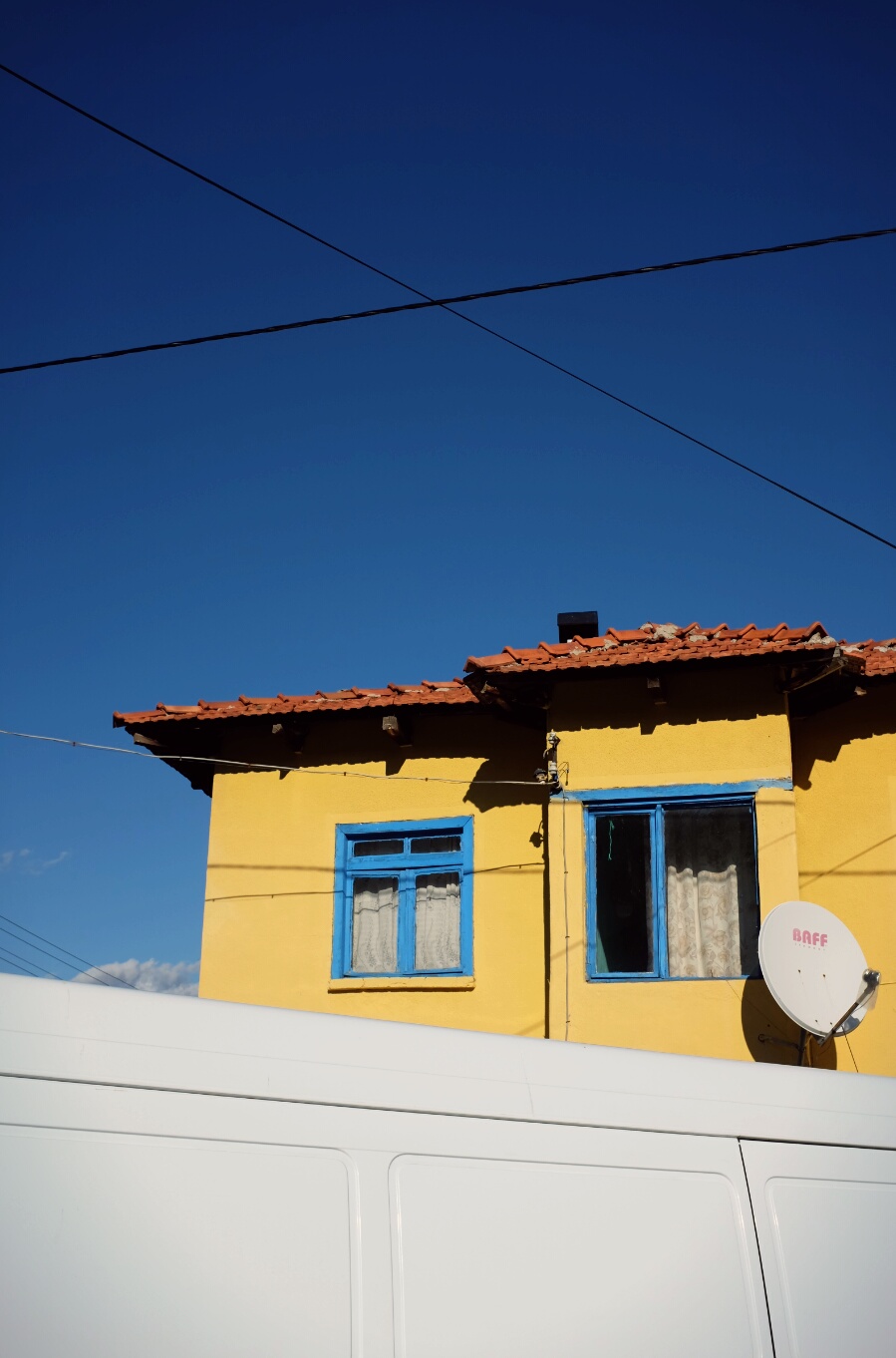 That afternoon was lovely, I cruised around town on my bike, met a bunch of folk, drank plenty of tea… and the quality of light was wonderful. Having felt a bit lost in Turkey so far I finally felt right at home. The temperature was ace too, a crisp 7 degs C at 2pm :-) 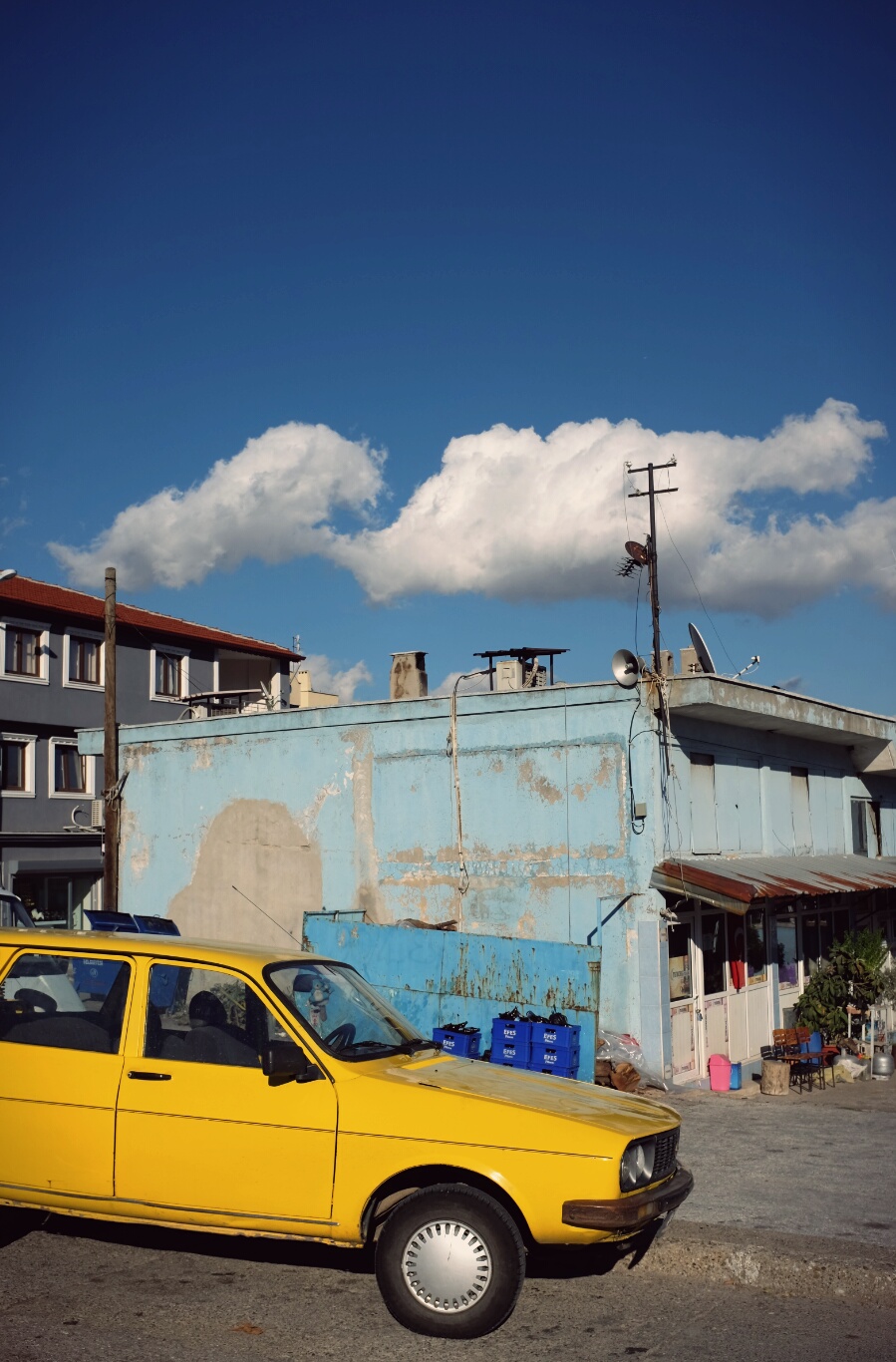 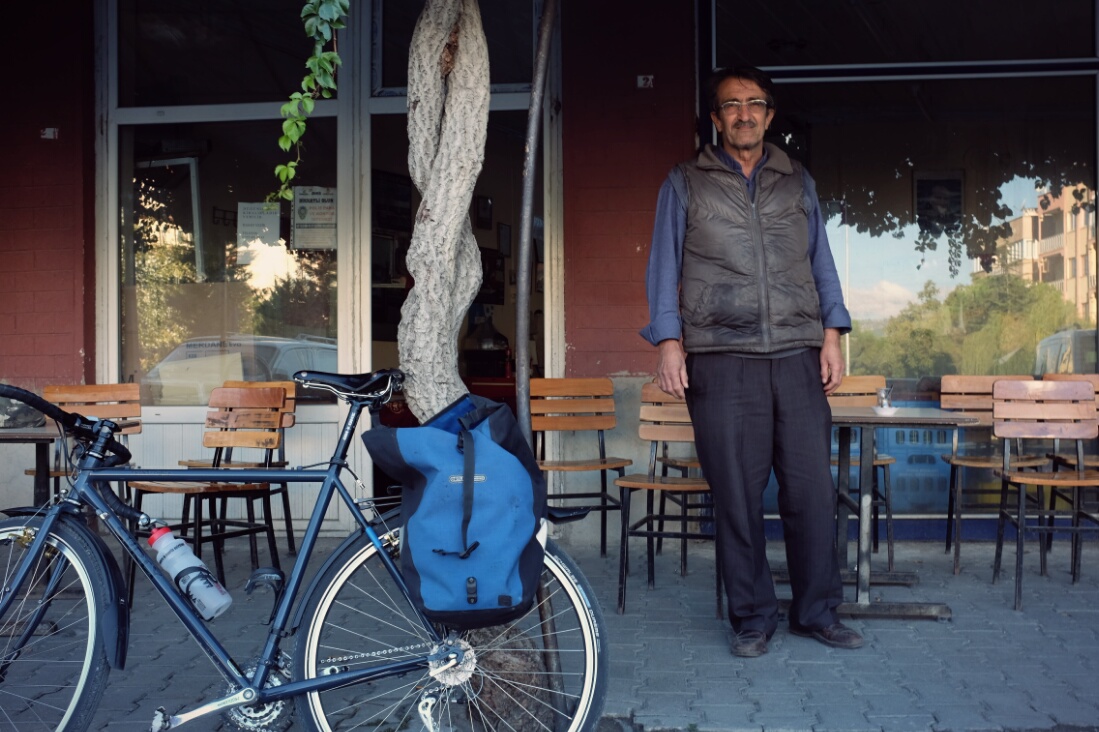 seems kind of redundant to say ‘friendly cafe owner’ as they all are.. 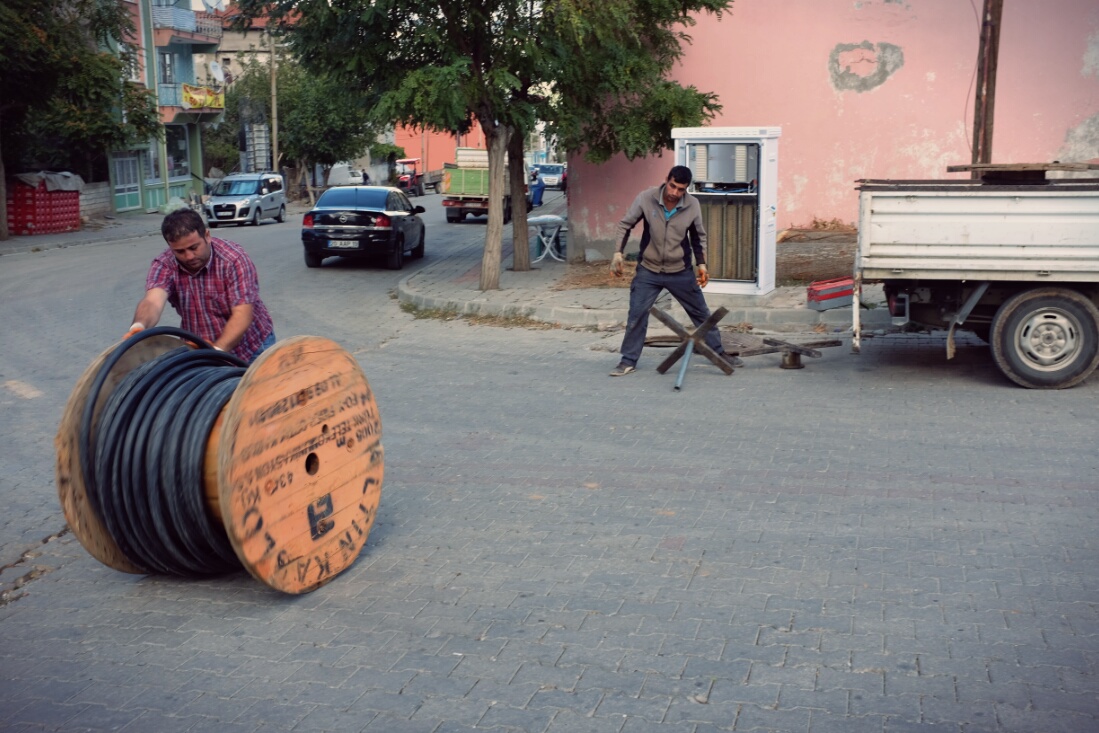 The following day took me to Salda Gölü, a deep crater lake nestled high in the mountains. It was a very cold day, a maximum of just 5 degs C out of the ever present wind. It was also another solid climbing day, on quiet roads with lovely autumnal mountain scenery. 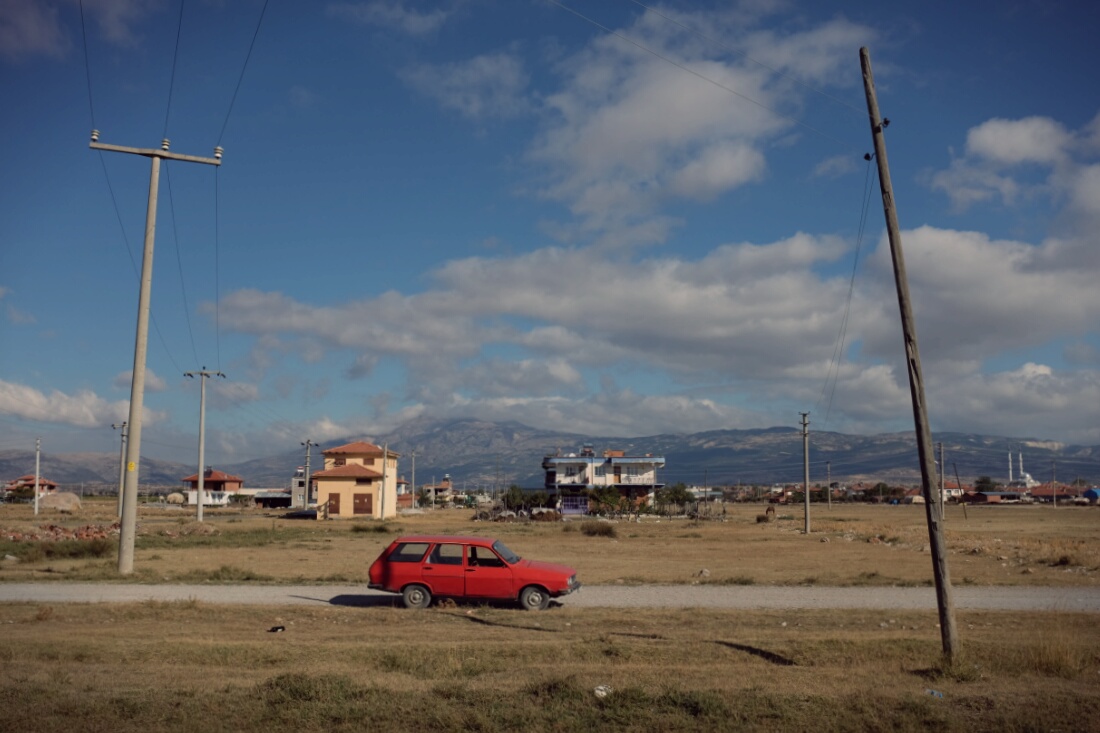 on the road heading east from Serinhisar

In one mountainside village I stopped for tea (there’s a theme developing here) and sat around a smoky old pot-bellied stove with the local men who all told me I should ride south to the coast at Antalya where it is warm and beautiful…. but also full of tourists and, according to my map, minimal riding alternatives to the busy coastal highway… so while nodding my head and generally agreeing that it was a good idea I decided I would find the riding more rewarding on my present route… the coast is not a place to enjoy the journey I have decided, rather it is just a place to go from destination to destination so fails miserably on a bike trip where the journey is intended to be the destination… or something… if that makes any sense at all. 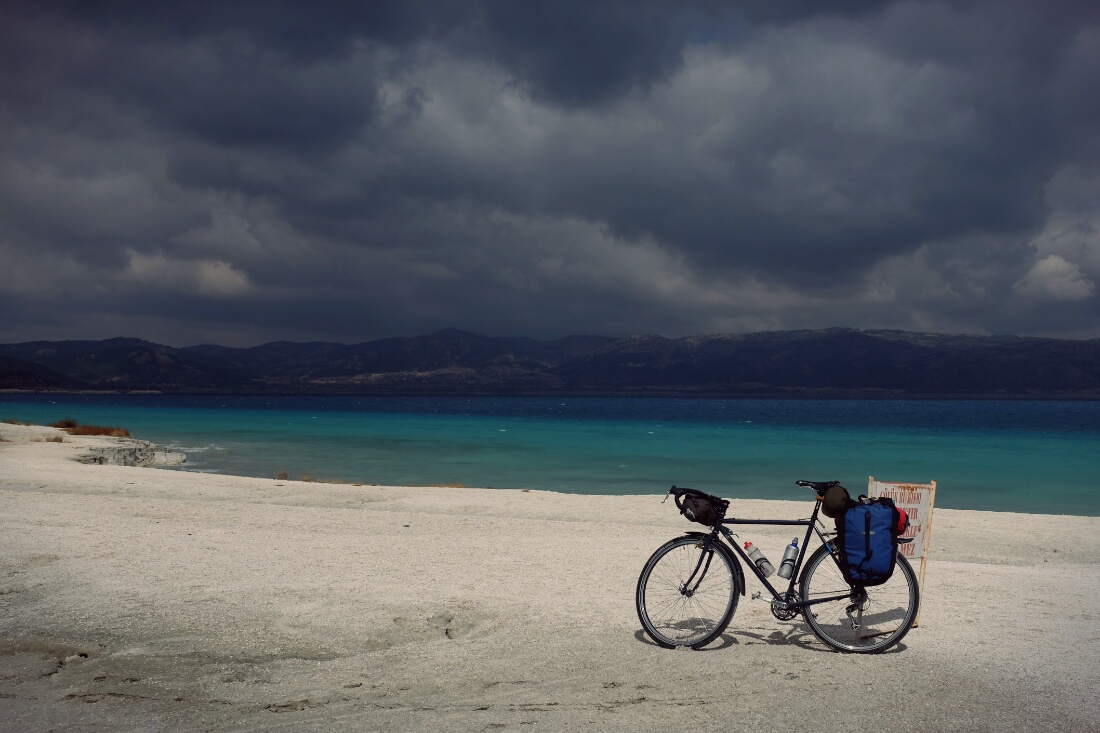 Salda Gölü.. reminiscent of riding in Patagonia… cold, windy, wonderful clarity of light, heavy clouds and the intense green-blue of the lake 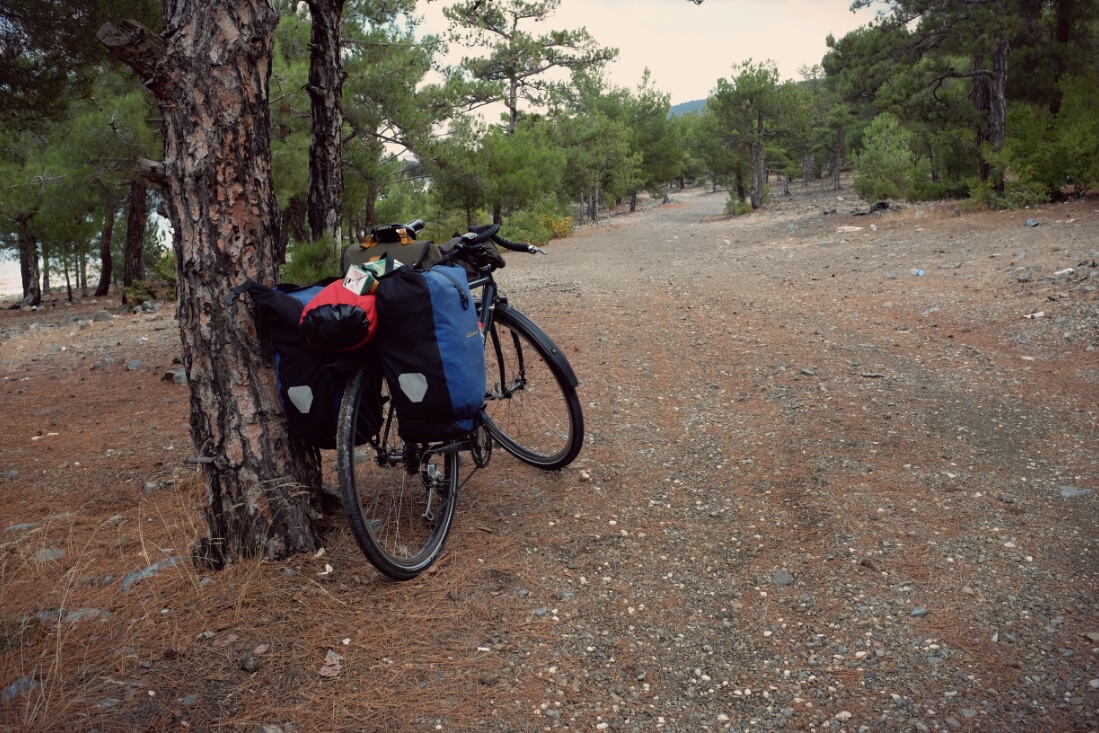 an enjoyable bit of dirt leading to… 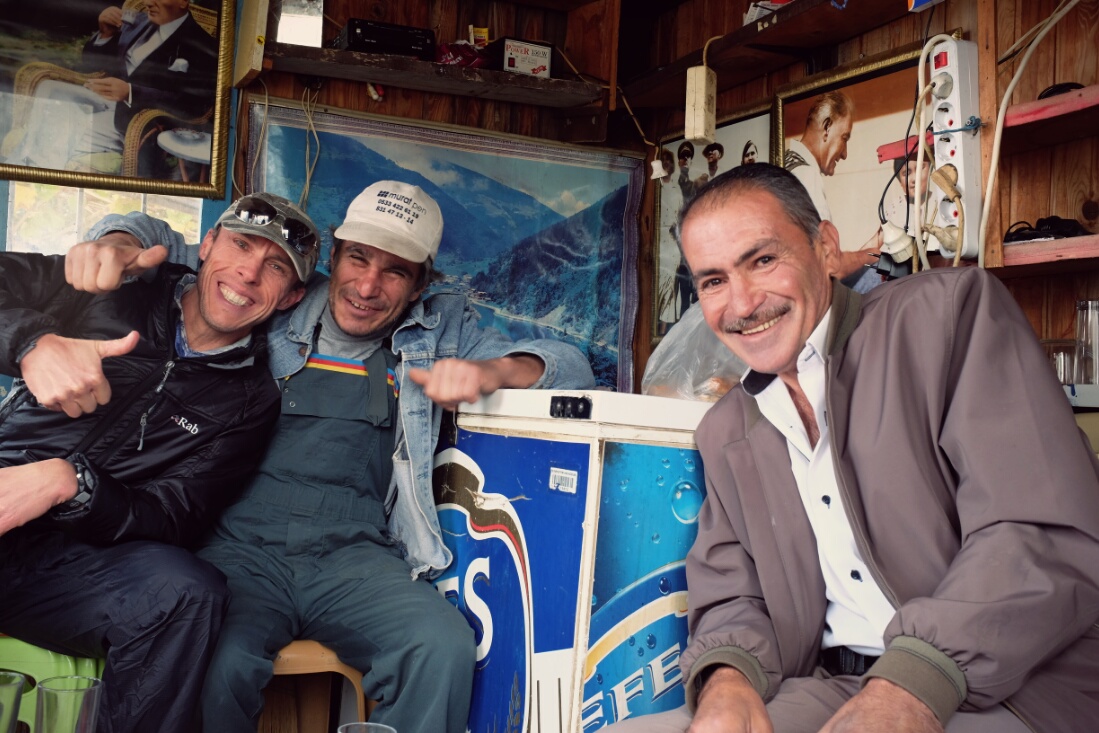 The Salda Gölü is stunning, I found a nice dirt track to follow through the forest on the shore… and at the end of the track I found a man with a shed, a fire and a bottle of wine… and extra glass was found for me so that was pretty much that for the day :-) Turns out his father was in the shed also.. bread, tomatoes and a plate of very hot chillies were produced and a pleasant afternoon spent by the fire… until it was time for me to go and find a spot to put my tent. The lakeshore is a kind of national forest/recreational area as it is so fabulously beautiful… sadly the long gone summer users of it have no conscience and in places it is knee deep in garbage of every kind imaginable. Heart-breaking… it would take a team and a truck many days to clear it up. Finding a spot for my tent was a case of finding the least mucky flat spot, it doesn’t bother me having travelled some very scummy spots around the world, and the view was superb… it’s just a shame. 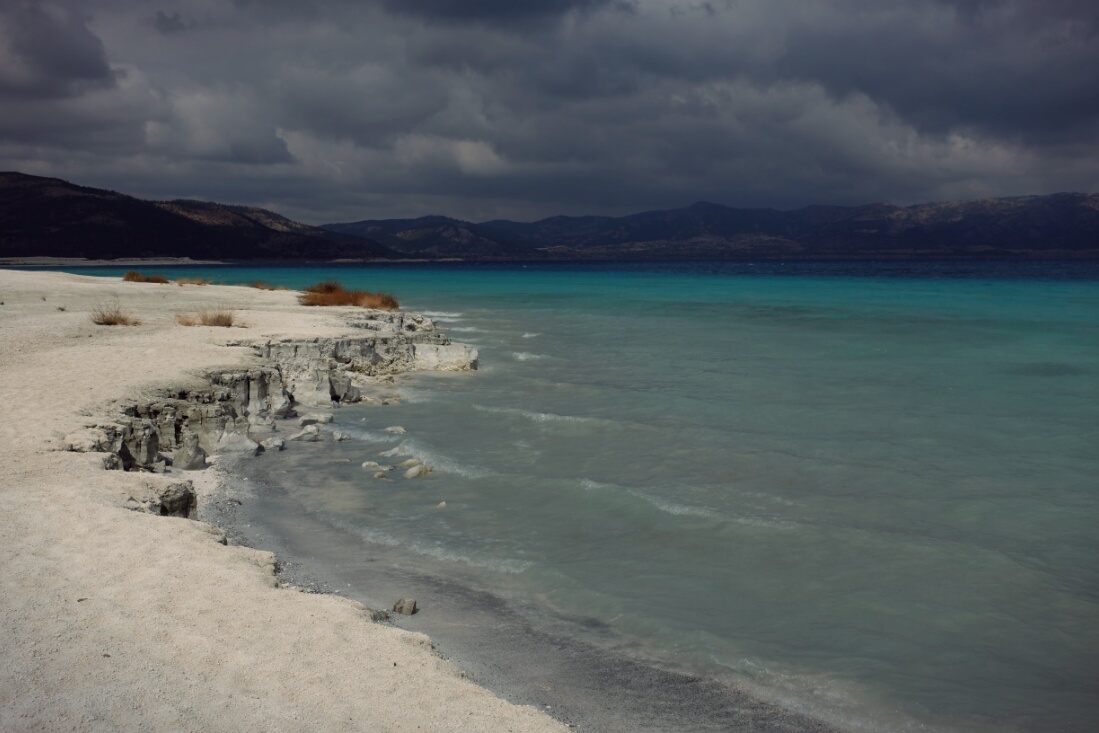 the lake is very different to the other lakes in the area… as a crater it is much deeper, about 200m, and the water, being very alkali is home to ancient, and rare stromatolite algae..

It was a cold cold night, I crawled into my sleeping bag at 7pm and stayed there, other than a couple of night time exits, until the sun began to warm the inside of my tent next morning around 7.30am. The temperature inside my tent was -2 degs, outside somewhere around -8C.. out of the wind. I’m not entirely certain as it was cold enough to make the LCD on my little measuring widget go black. I’m geared quite lightly for this trip and it was about as cold as I can manage with the gear I have. It was a slow start to the day… but it turned into a good one. 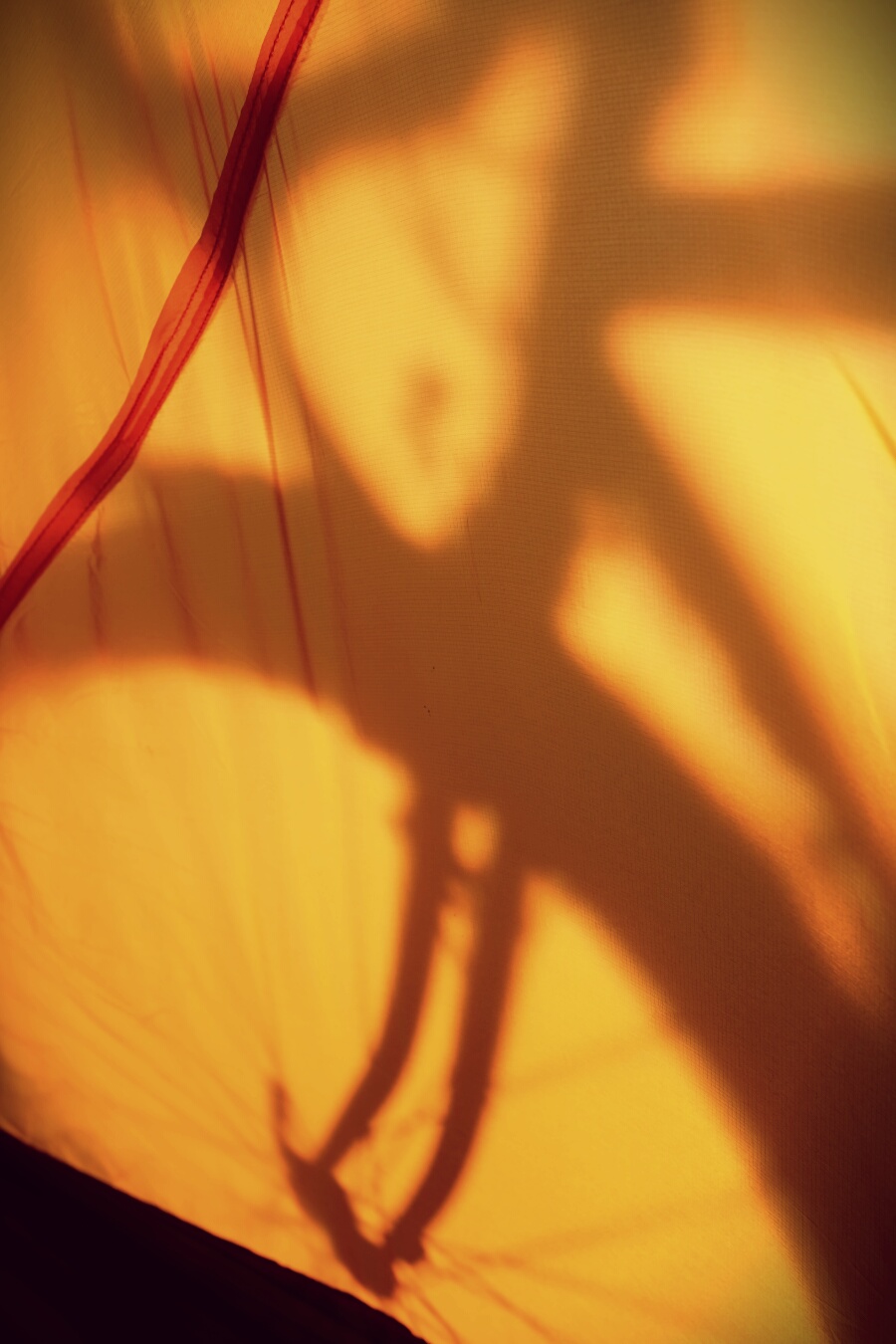 sunrise in my tent, the temperature rose enough to make getting up a marginally more agreeable prospect ;-) 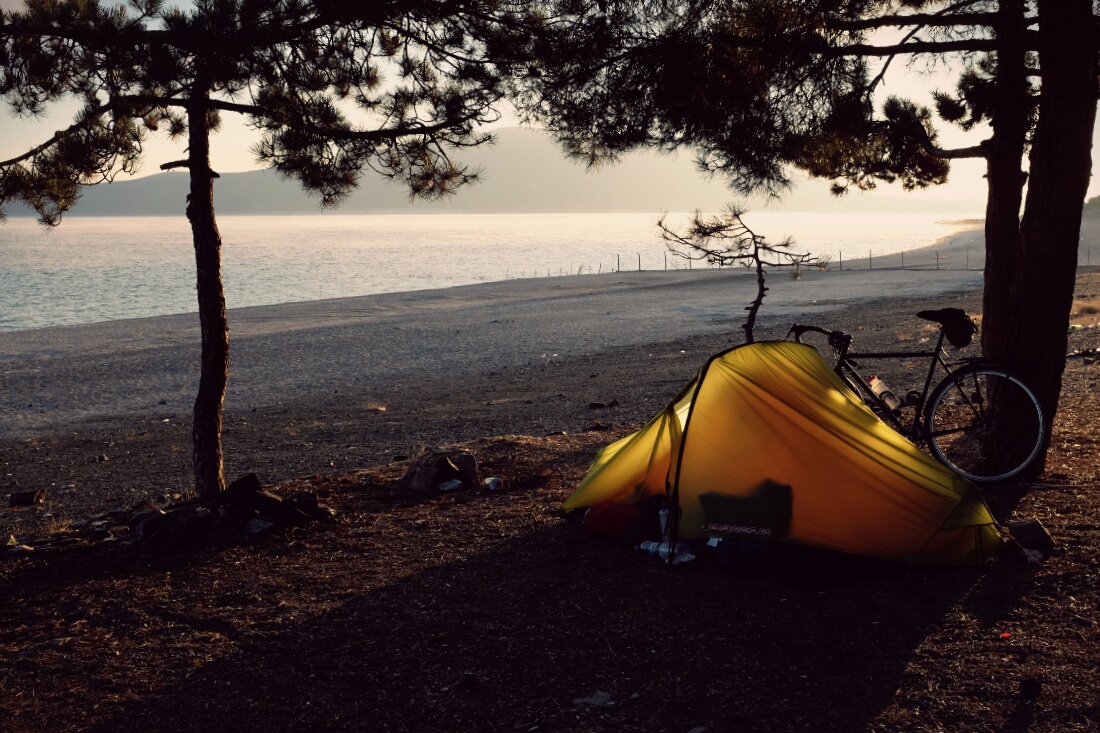 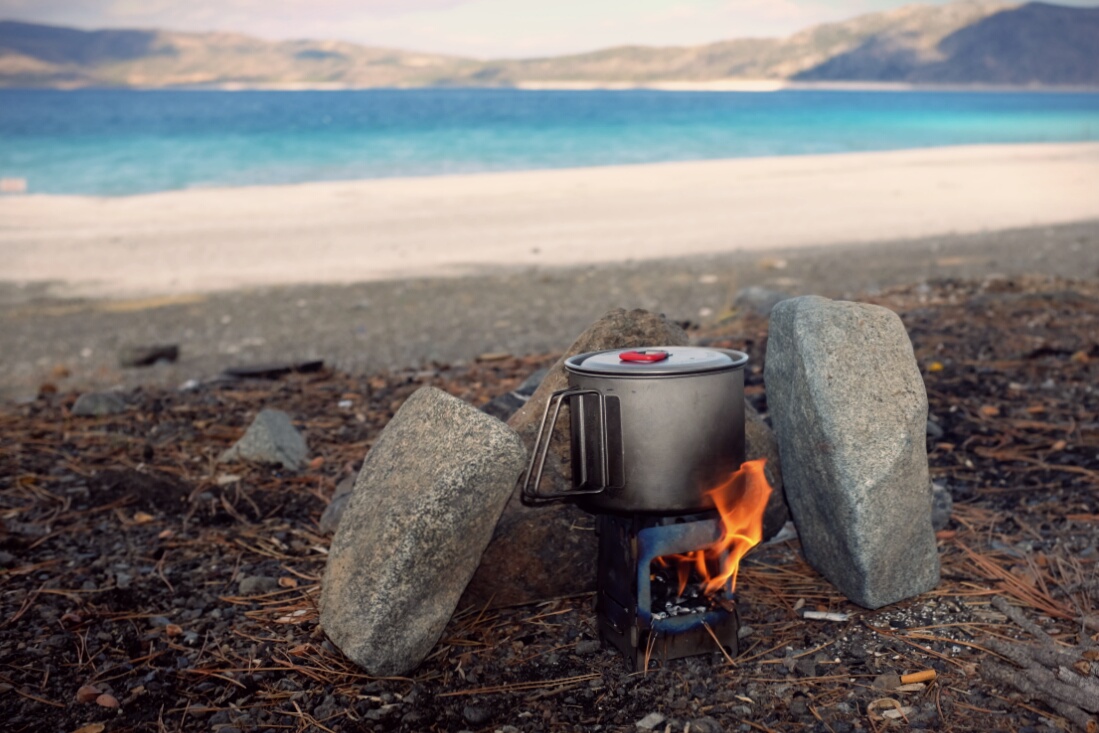 a brew on… the little pocket stove did struggle a little with the wind and icy cold water… but got there eventually :-)

Just 200m down the road I was stopped by a chap who had been to collect his bread for the day. He gave me half… wonderful bit of extra breakfast ‘on the hoof’ so to speak.. and then after just 2km in the village of Yesilova I found myself unable to continue until I had taken tea with a group of local chaps…:-) The wind was brutal again but the riding was fabulous…empty roads and mountains. All I need. 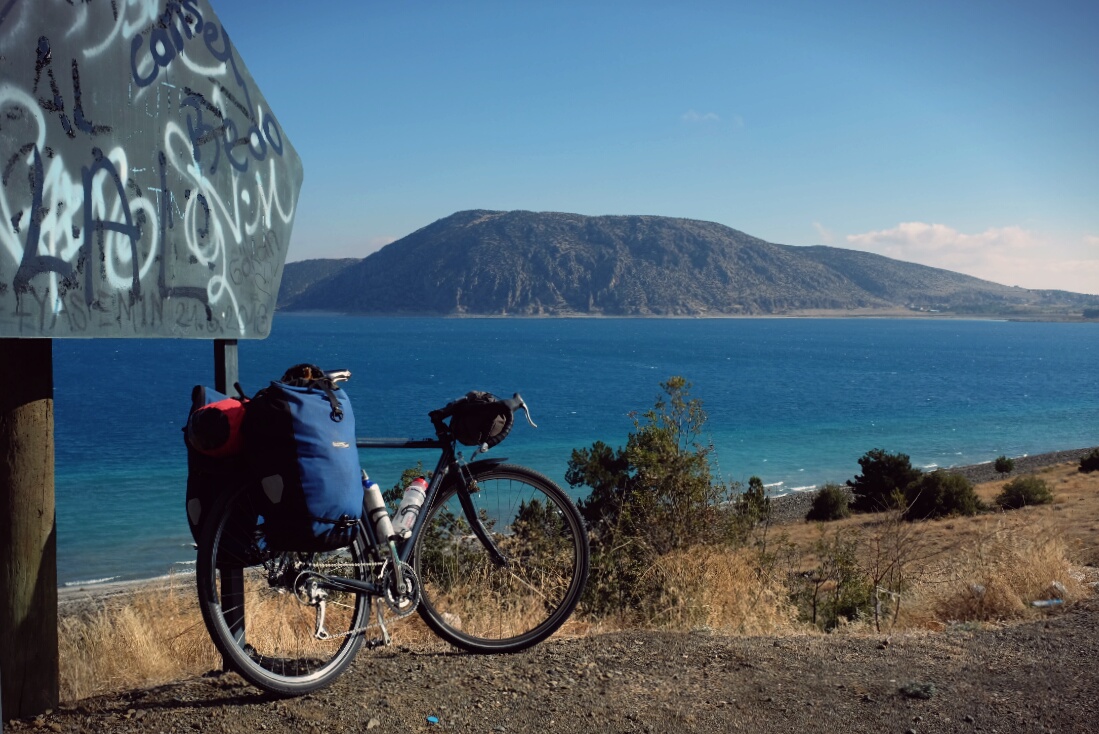 a morning view of the lake.. 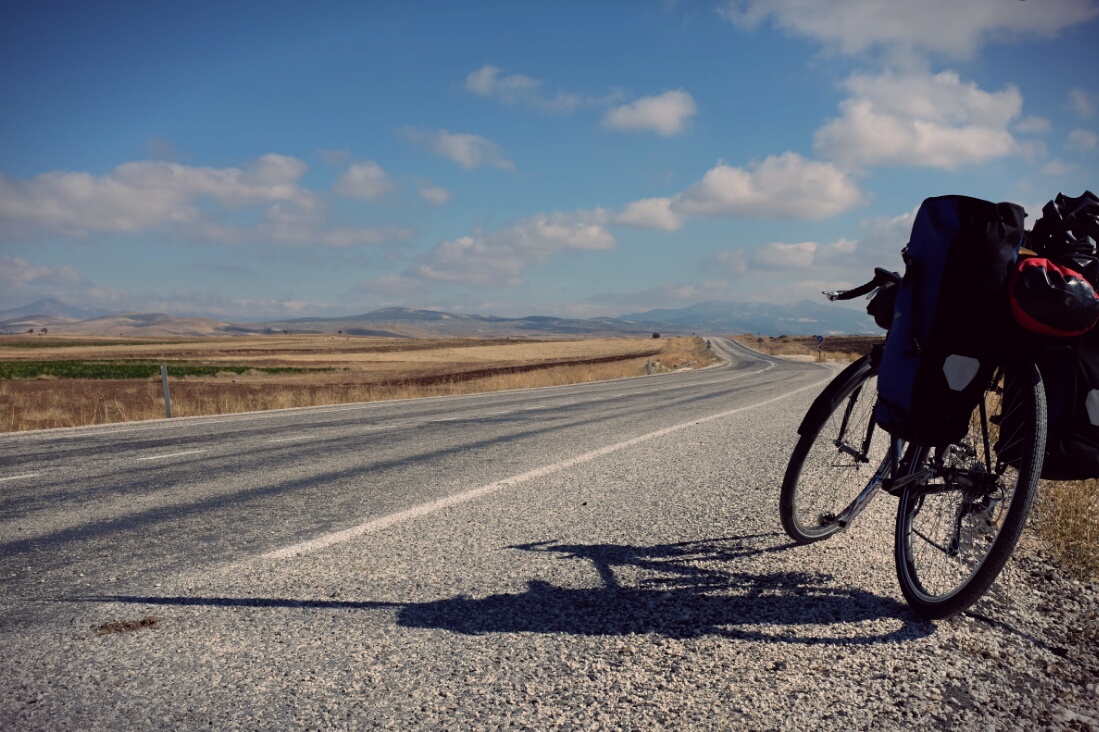 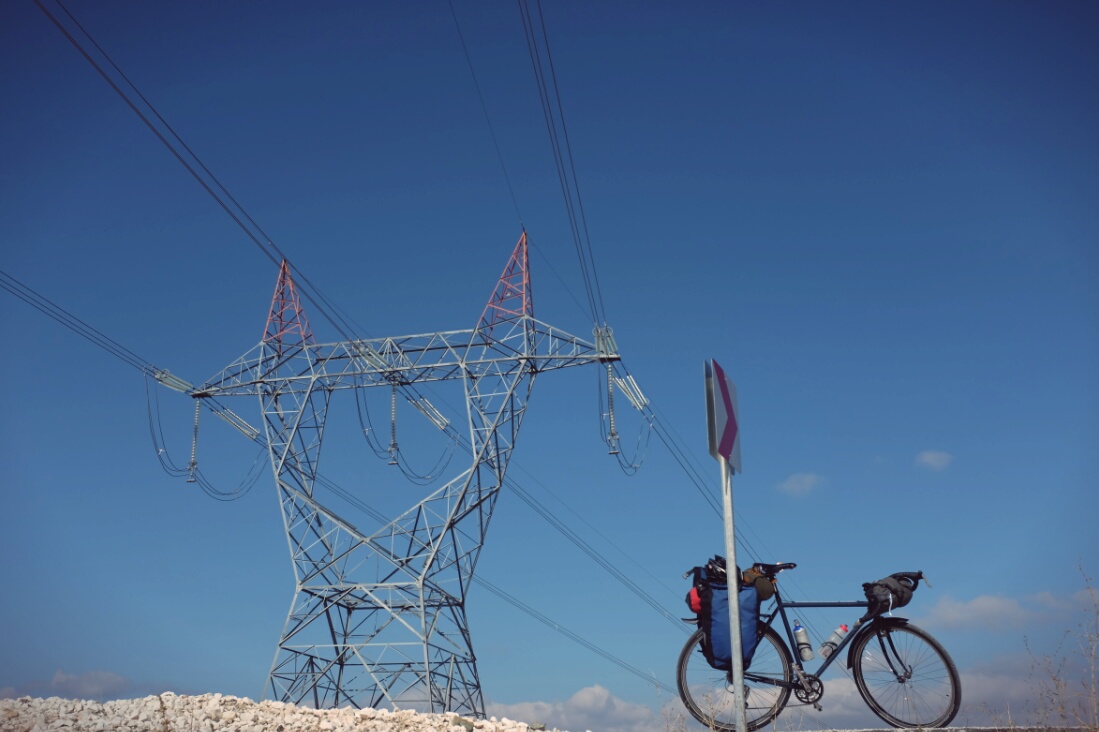 Turkey is investing in infrastructure on a grand scale. There is every likelihood that the small road marked on the map will turn out to be a spanking new, albeit very empty, superhighway 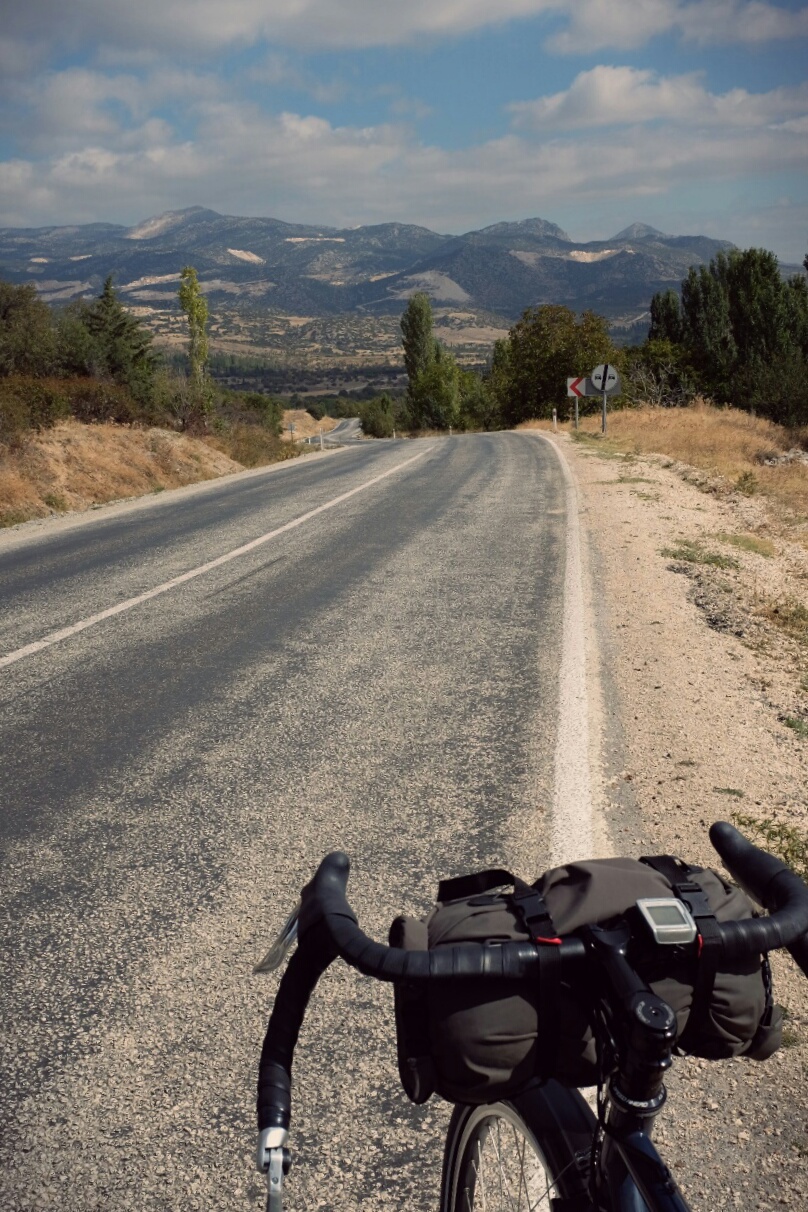 a really great day of riding 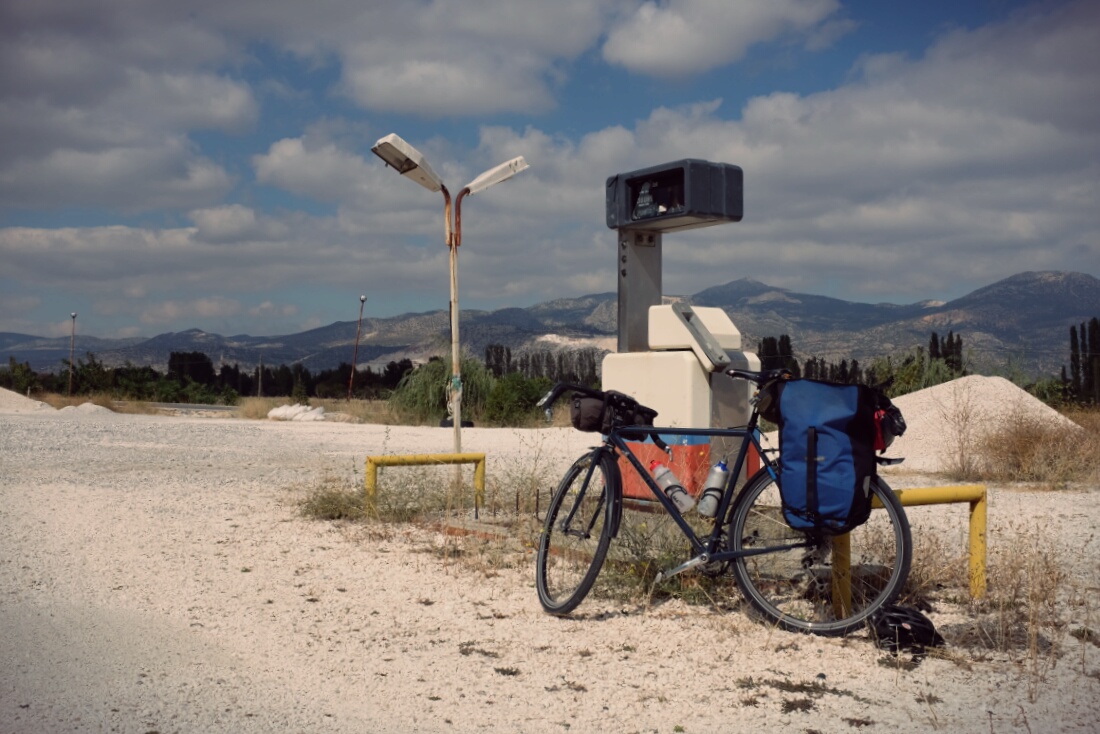 Stopped for the night in Burdur, an unremarkable town that I didn’t feel worth exploring.. I was knackered, but it did have very good cake and a friendly little pension just 100m from the bakery with the aforementioned cake so in all respects it was a good stop :-) 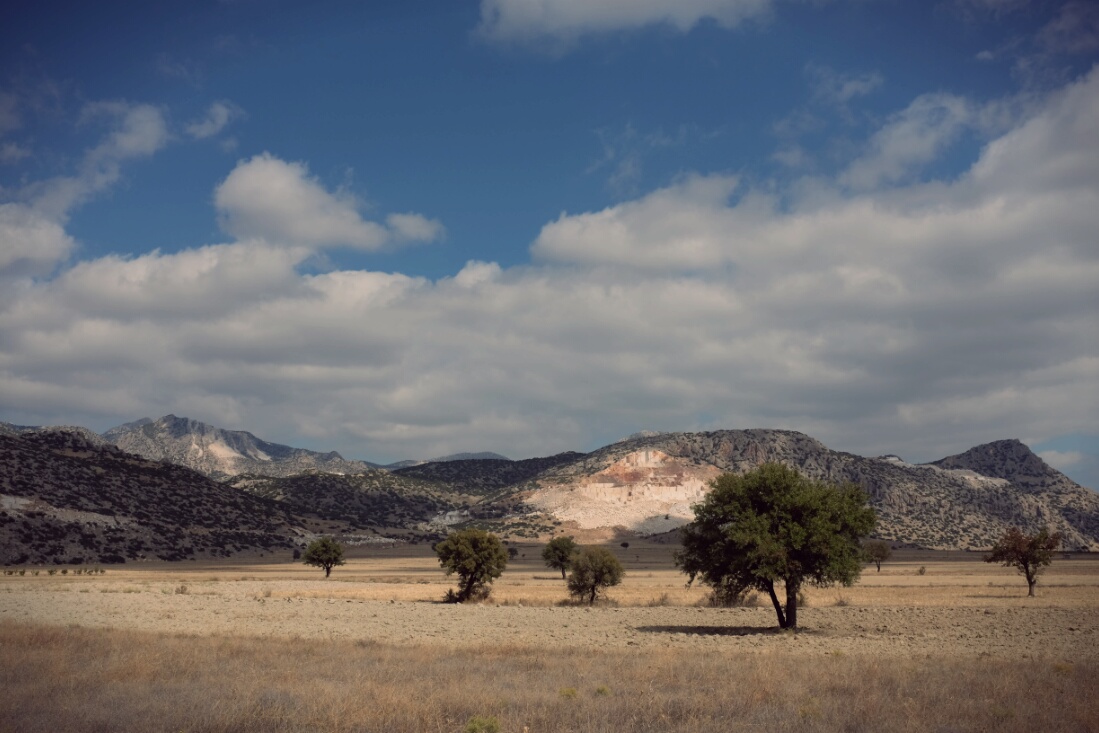 many of the hills around are solid marble, the gleaming scars of quarries with towering, white, vertical faces dwarfing the heavy machinery

From there another good day of quiet mountain roads, albeit with that vicious wind (not quite to Patagonian standards but not far off..), to Eğirdir… a remarkably beautiful spot ringed by high mountains on the shore of Turkey’s 2nd largest freshwater lake (it is a big lake…). I am staying here for a couple of days to rest my legs properly before moving on. The plan is to ride north to Afyon but if the howling nor’easterly doesn’t cease I will indeed be sorely tempted to run south to the coast for  a few days and then endure the 14hr bus ride back to Istanbul for my flight home. In the meantime though… eat, sleep, drink beer and take photos :-) 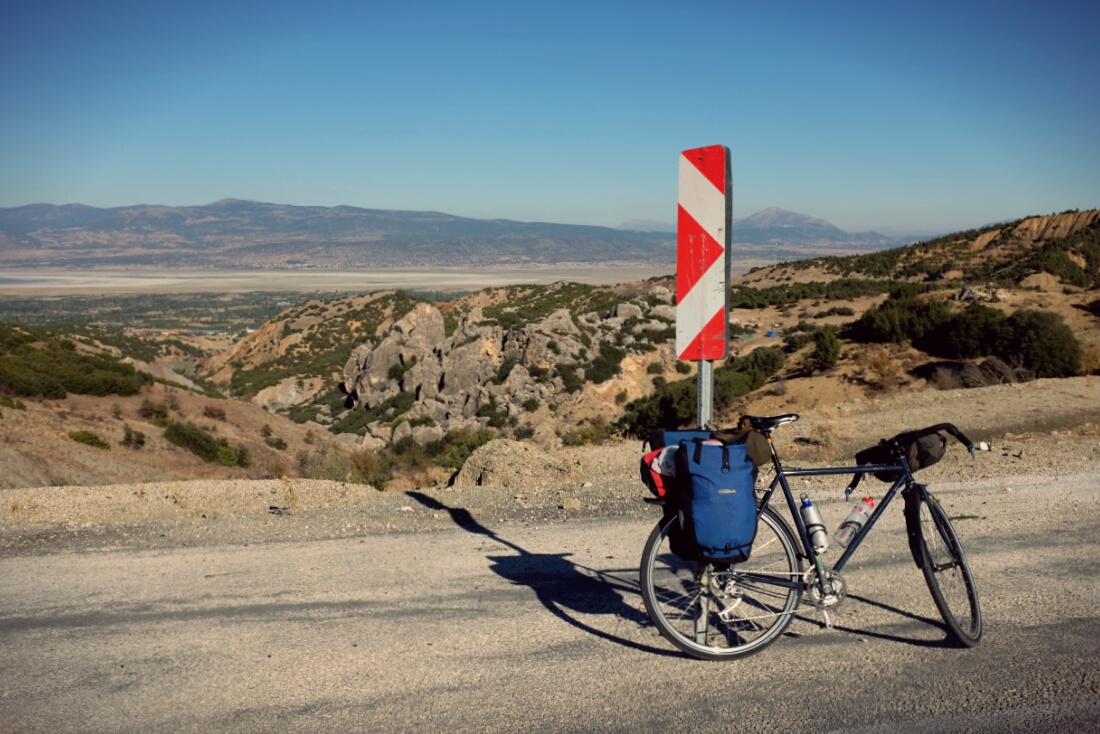 climbing away from Burdur 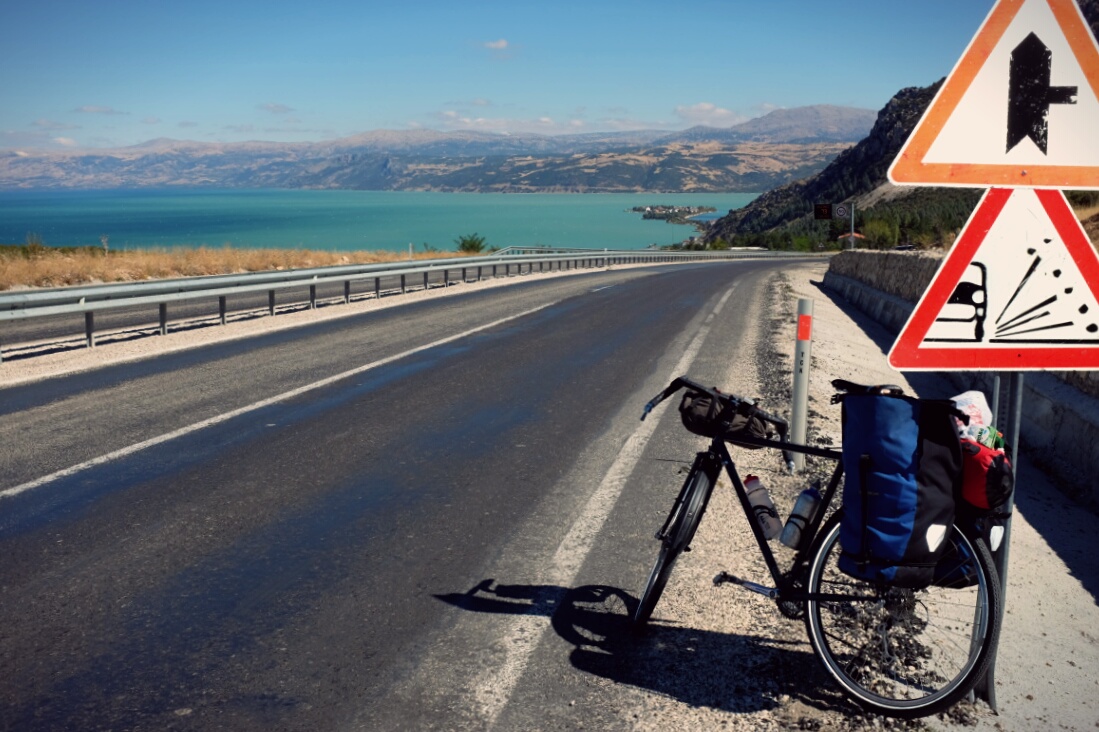 arrival above Eğirdir had a ‘take your breath away quality’ that the snapshot cannot do justice… a stiff headwind climb, around a bend and through a cleft in the mountains.. to reveal the lake and town (on the spit of land) laid out below 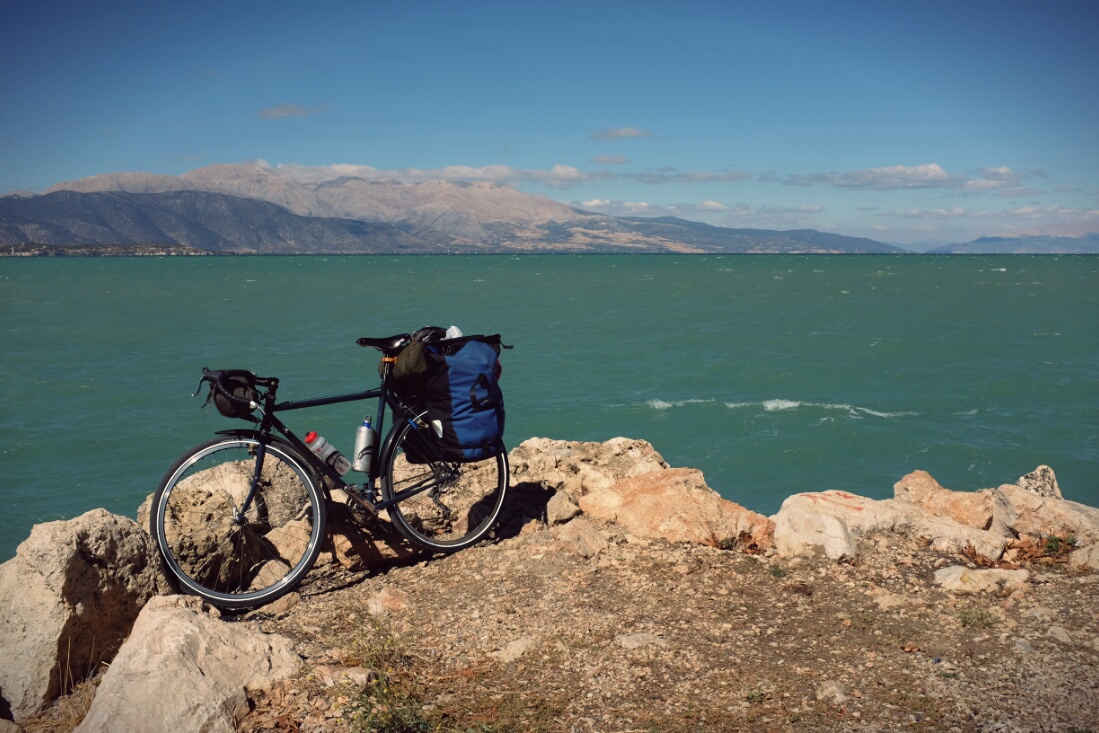 I rode into town along a lakeshore footpath, far more fun than the road