At times over the past few weeks I’ve been suffering something of a malaise which at times extends to finding it hard to get to grips with the banality of life in general. January is always a bit like that, with no firm expedition plans made yet, just ideas, and having other friends that are on the road (seemingly all the bloody time sometimes ;-) I find all I can think about on frequent occasions is being somewhere else other than here.. somewhere wild. The simplest act of delving into the files for an image to use with a job risks an episode of day dreaming…  Now, over the years I’ve put my tent in countless spots, most really cool, some really crappy.. and some of those quite literally shitty, perhaps the worst being pitching camp in the dark one evening by a road in the Himalayas, only to wake next morning to find myself surrounded by hundreds, possibly thousands of dessicated turds dotted as far as the eye could see… with little flat ground around and being near to the road the spot I’d chosen had clearly been used as a toilet spot by passing truck drivers for years.. the bone dry, high altitude climate preserving the evidence for lordy knows how long. Thankfully a dry turd is reasonably inoffensive.. but still… Anyway, that spot is burned into my memories for all the wrong reasons, but amongst all the great spots there are a few that are burned into my memories for other reasons… here are a few.

In 2011 I worked a summer as a sea kayak expedition guide in the Outer Hebrides. It was a fabulous summer, just a string of week-long journeys around uninhabited islands, camping on empty beaches, with mostly great people. This camp spot is memorable because, aside from being breathtakingly beautiful, for 2 weeks up around the Isle of Harris I was paired with another guide (generally 2 guides per group) who was an absolute shocker for not lifting a finger to help. Quite full of himself he’d always be the first on the water in the mornings rather than helping with clearing away the camp kitchen after breakfast or helping clients with their boats and so on… I’m generally not confrontational, and especially not when there are clients around, so I just got on the with job of making sure everyone had an awesome time, but eventually I did get on his case because it was really starting to impact the overall client experience. It made little difference.. but on this morning, the last camp of that two weeks, on the stunning little island of Taransay I got up early as usual to get tea on the brew and start making breakfast. When I got down to the beach where I’d set up the kitchen I was stunned to find the stoves lit, kettle on and breakfast stuff prepared for cooking… I nearly fell over with shock. I can only surmise that one of the clients (and I think I know who it was) had had quiet words with him about how rubbish he was being… I thought it was funny as hell, and I really enjoyed my large tip at the end of that journey :-) As an after thought there is probably a blog post somewhere on the web from a kayaking guide complaining about an awful chap from Cornwall he was forced to work with once that was just always on his case…

The rather stunning Isle of Taransay

This one is memorable perhaps for a wrong reason.. it was a great wilderness climbing trip in a relatively remote area. The area we were climbing was underneath one of the air corridors that headed west out across the Pacific ocean so airliners at high altitude could frequently be heard, especially at night when the wind dropped and aside from the occasional rock fall or grumble from the nearby glacier, there was nothing to disturb the absolute silence. Then one night, lying in my sleeping bag in this spot it occurred to me that I hadn’t heard any aircraft for a while, I have distinct memories of that moment, quite weird…. Of course I thought no more about it until a week later when we finally made it back to civilization to find that the world had changed somewhat. That night was Tuesday, September 11, 2001. 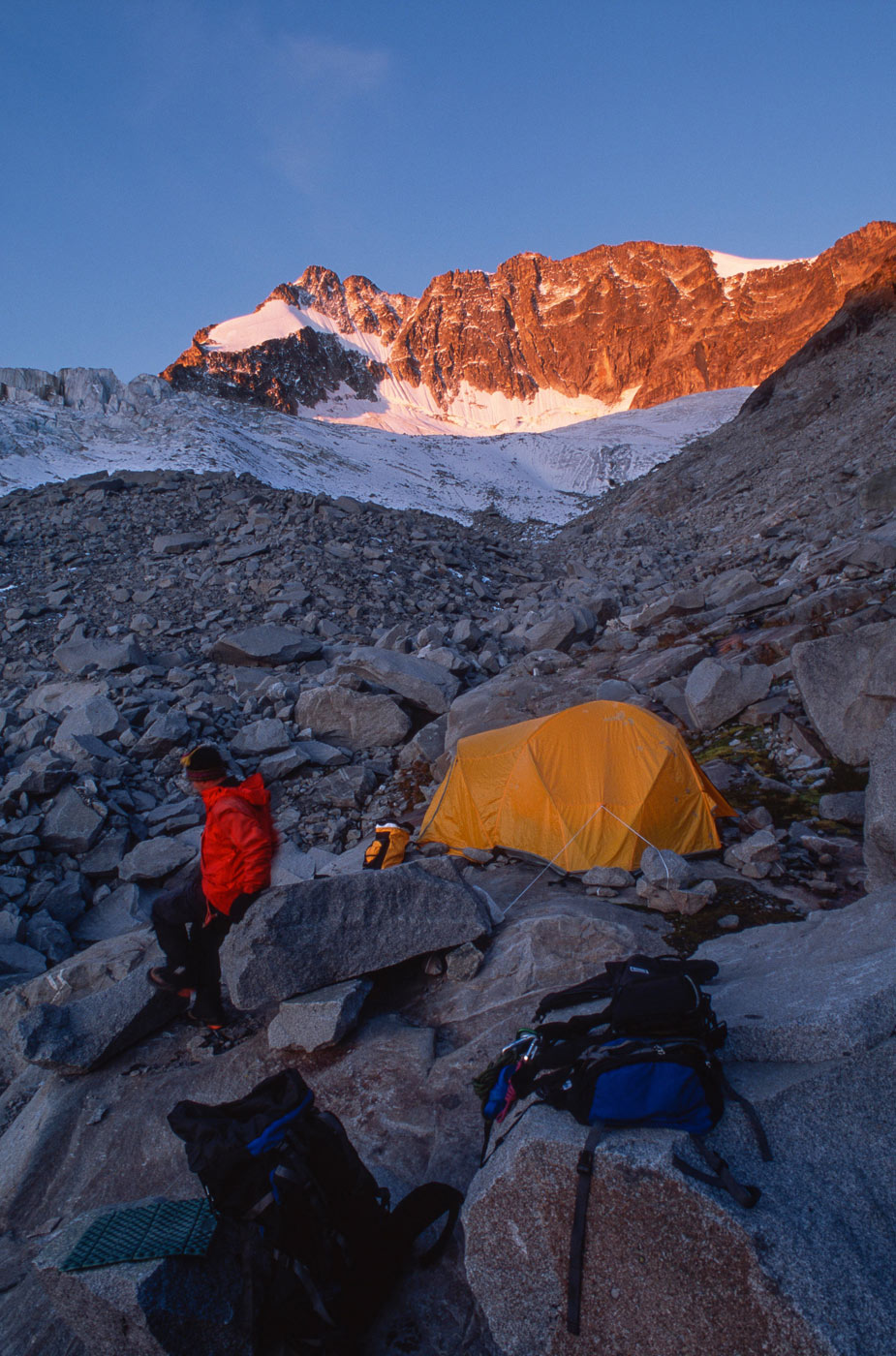 This is the spot in southern Patagonia (Chilean part) where Lago General Carrera pours into the adjoining Lago Bertrand. A terrific spot to stop, the water is crystal clear, icy cold and tastes wonderfully sweet. I had a good wash. It is memorable for having the living daylights scared out of me by a silly thing in the middle of the night. The Carretera Austral here is a really quiet, just a few vehicles a day and it was a peaceful night.. until I was woken suddenly by the most god-awful noise. In the fug of coming out of a deep sleep at around 2am, and knowing that I was in what should have been quiet wilderness I genuinely thought the world was ending… I scrambled out of my tent in terror, expecting to see burning skies and rivers of lava… to find everything completely normal.. with the exception of a horse walking at a trot across the bridge above my head…. the source of the noise, metal shod hooves on the metal road bed…. I can be such a dick sometimes. 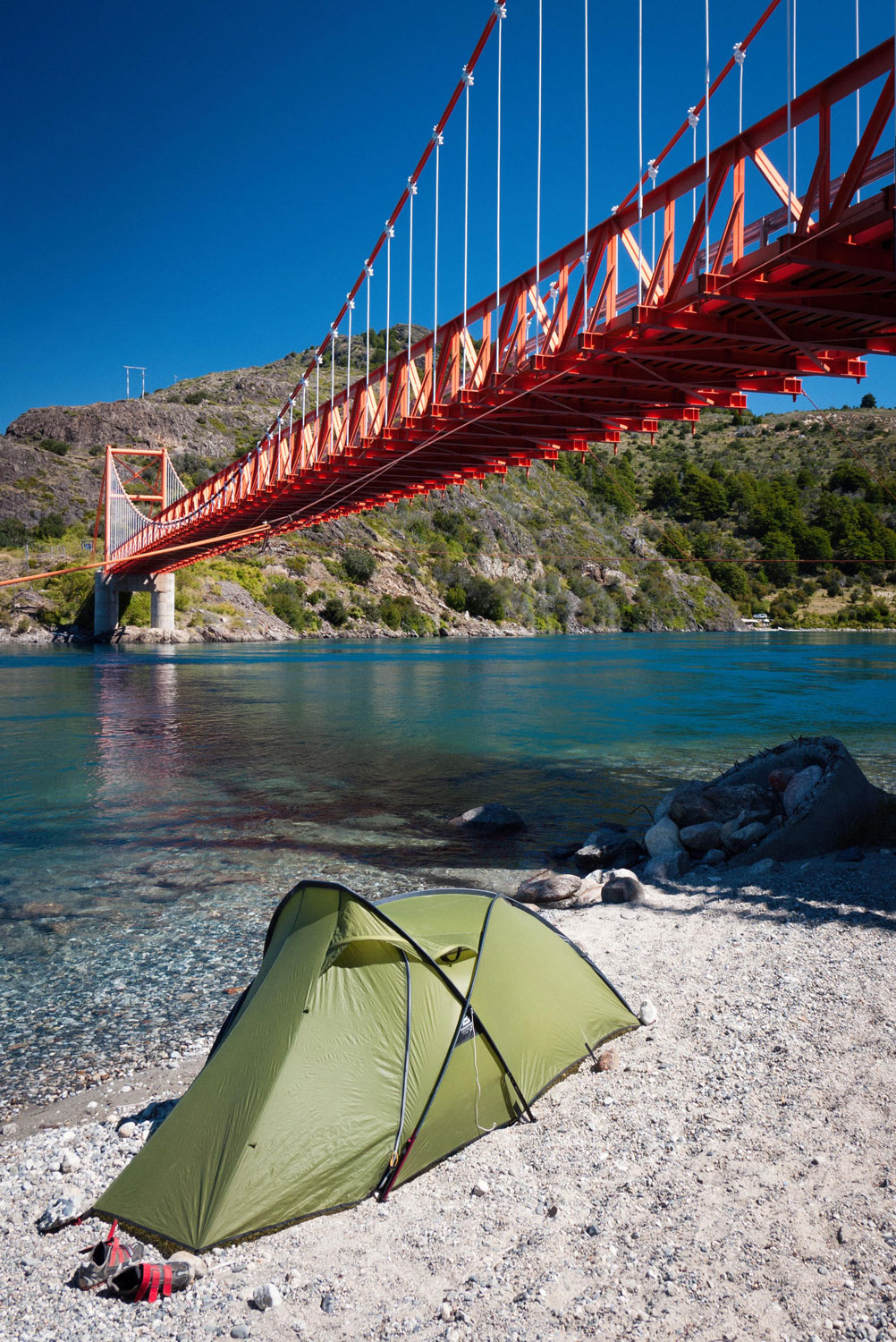 Inca Huasi is one of the tiny, ancient coral atolls that dot the Salar de Uyuni, 4000m up on the Bolivian Altiplano.. memorable because… well, look at it… It’s tempting to camp on the salt but generally unsafe because the occasional truck or 4×4 does race across its 4086 sqkm at night, intoxicated Bolivian at the wheel. You wouldn’t stand a chance in a tent. Happily the little cactus covered islands are just ace. Cycling across it was nicely surreal… for a bit and then just a bit boring, especially by day two.. 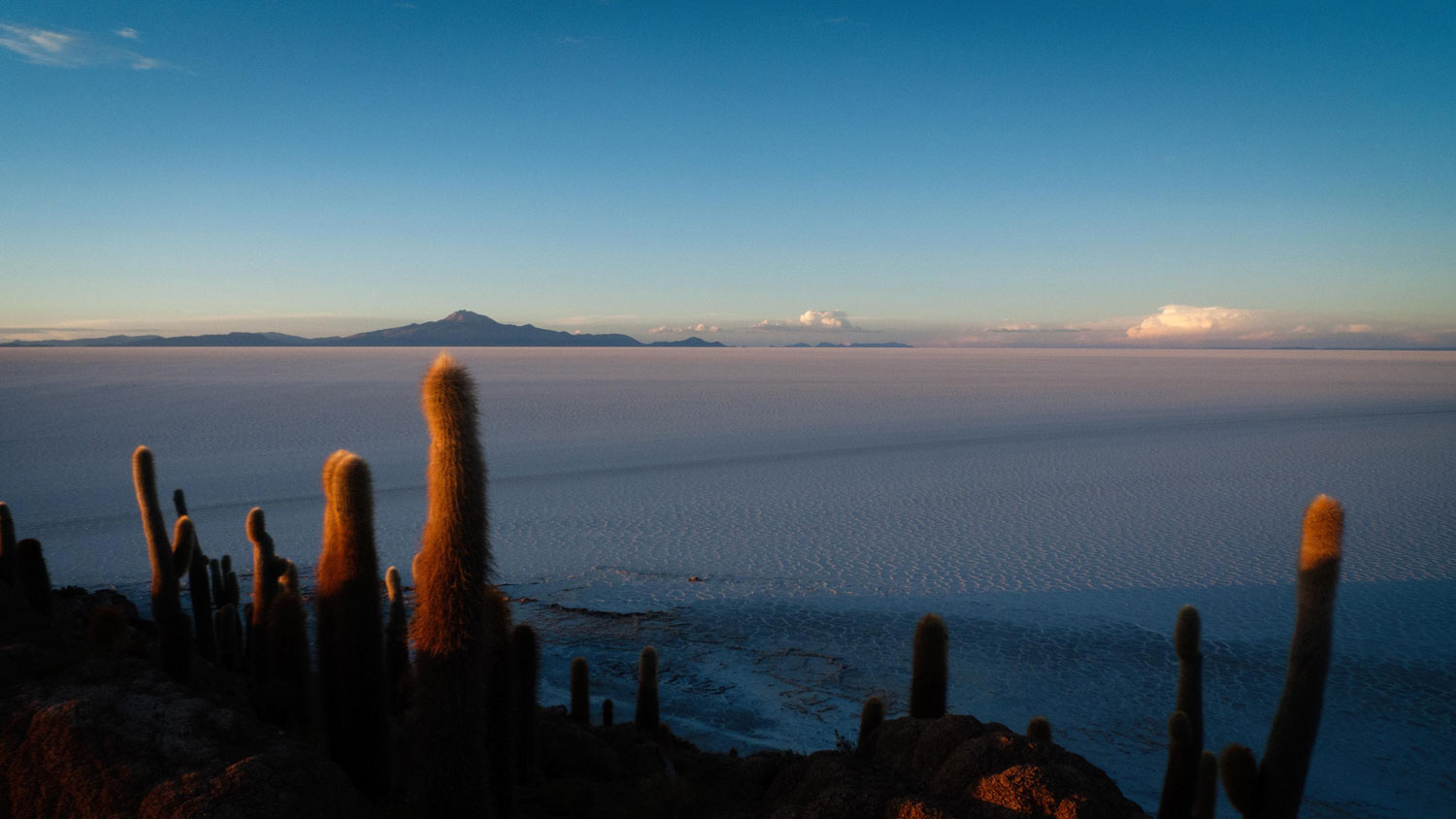 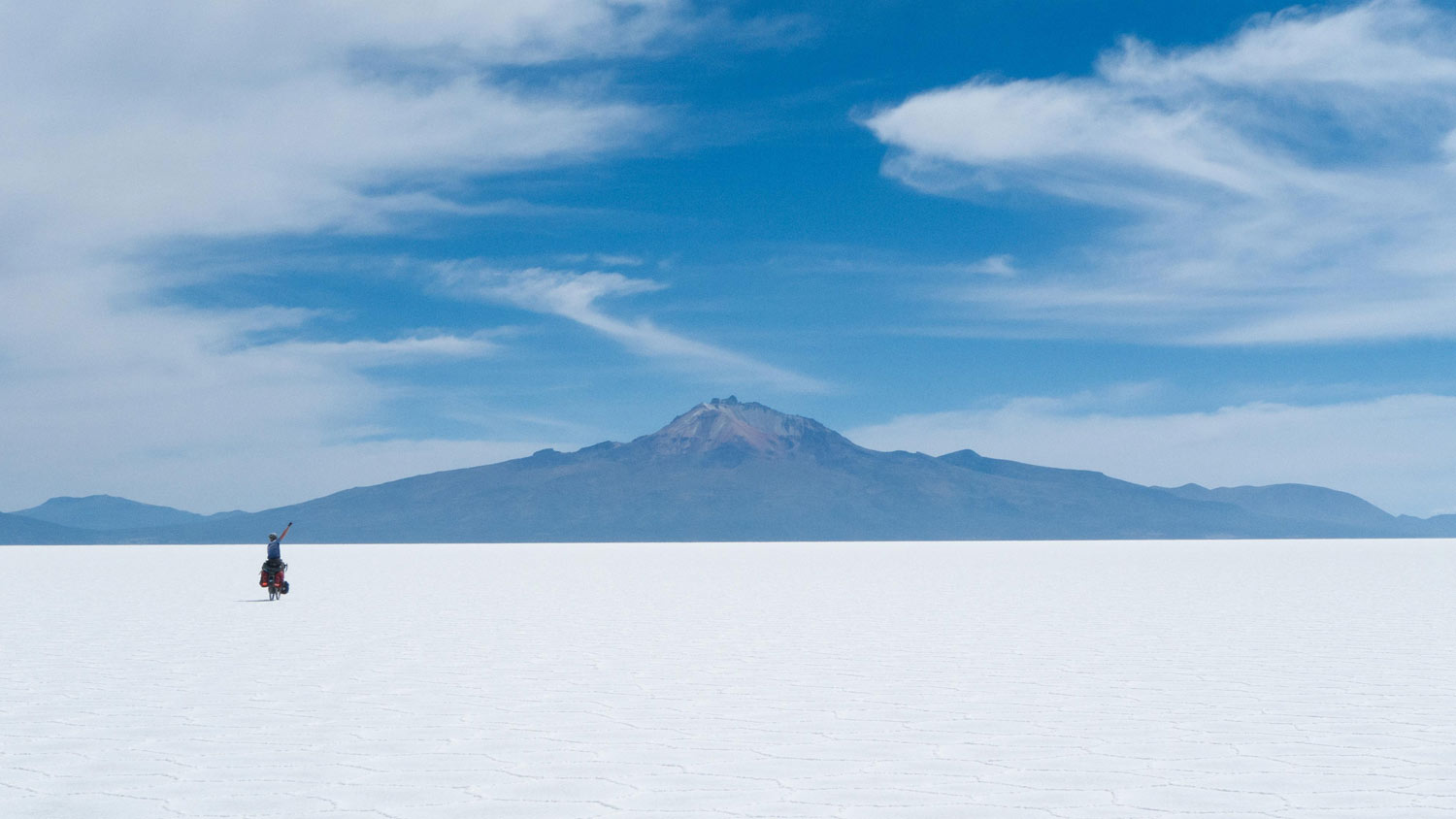 Memorable for being a lovely spot, albeit a vast spot, of empty wilderness in the shadow of the San Valentin section of the Patagonian icecap. Memorable because it was only about midday when I came across this spot but not stopping for the night would have been wrong so spent the whole afternoon sitting on my arse just looking at the surrounding mountains and drinking tea. I did swim for about 5 seconds by way of washing off a few days worth of dirt, the lake was glacial. I also felt naughty camping so close the water, normally a bad idea in case of storms, and I had a pair of enormous condors circling right overhead while I cooked dinner. Probably trying to work out whether or not a scrawny cyclist was worth the effort. 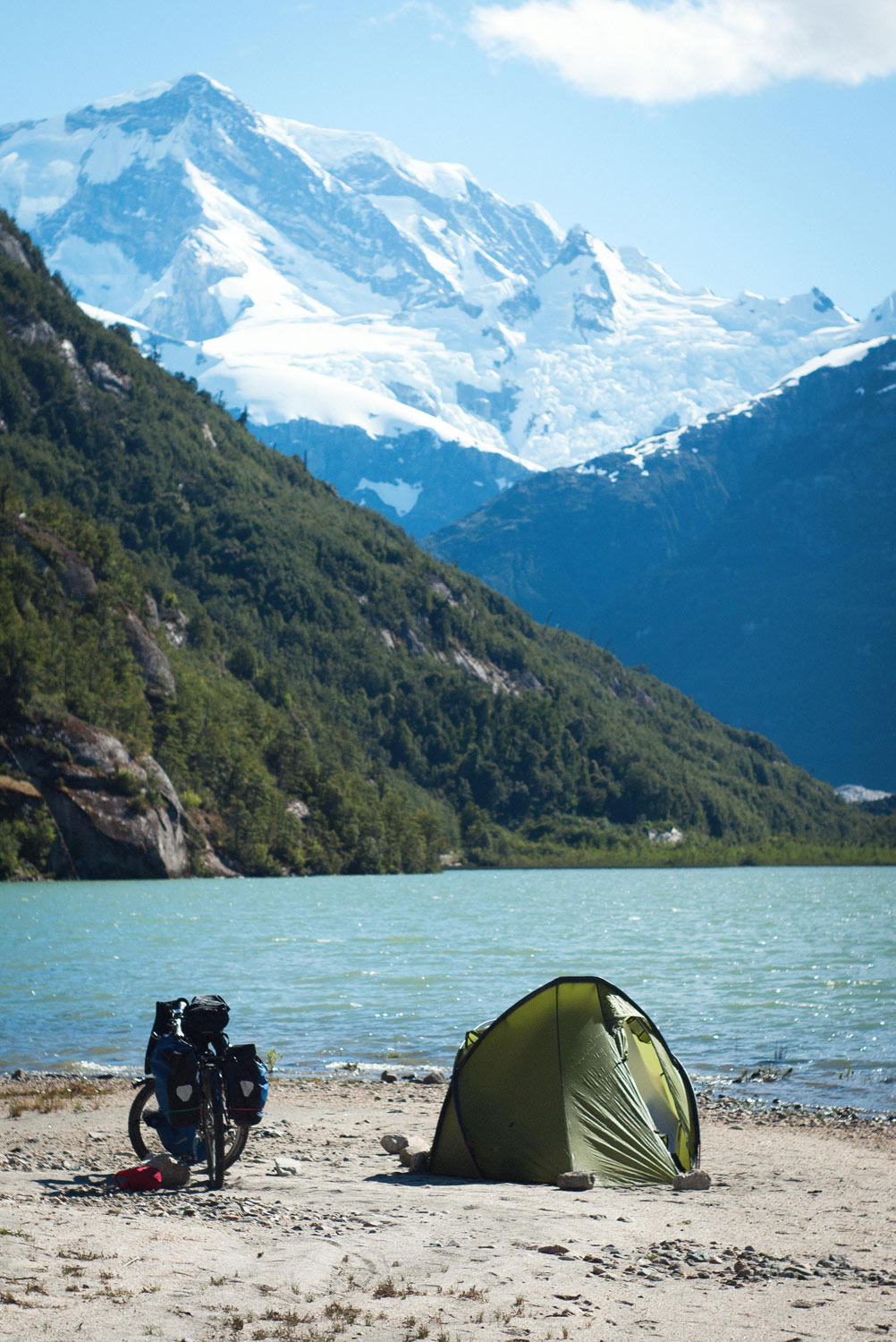 More climbing, this spot was basecamp for a few days while climbing some remote peaks in the area. Ace for its inaccessibility.. we needed a helicopter. The skill of the pilot was remarkable, with no landing spot and surrounded by steep cliffs he hovered, one skid just touching the top of one of the boulders covering the top of the glacier while we tumbled out with our gear. That whole rock field was alive.. constantly moving and grumbling as the underlying ice made its way downhill. The sense of isolation once he’d flown away was remarkable. Very good fun and definitely makes me want to get back to doing more of this kind of stuff rather than bikes and kayaks as has been the case since living back here in Cornwall. 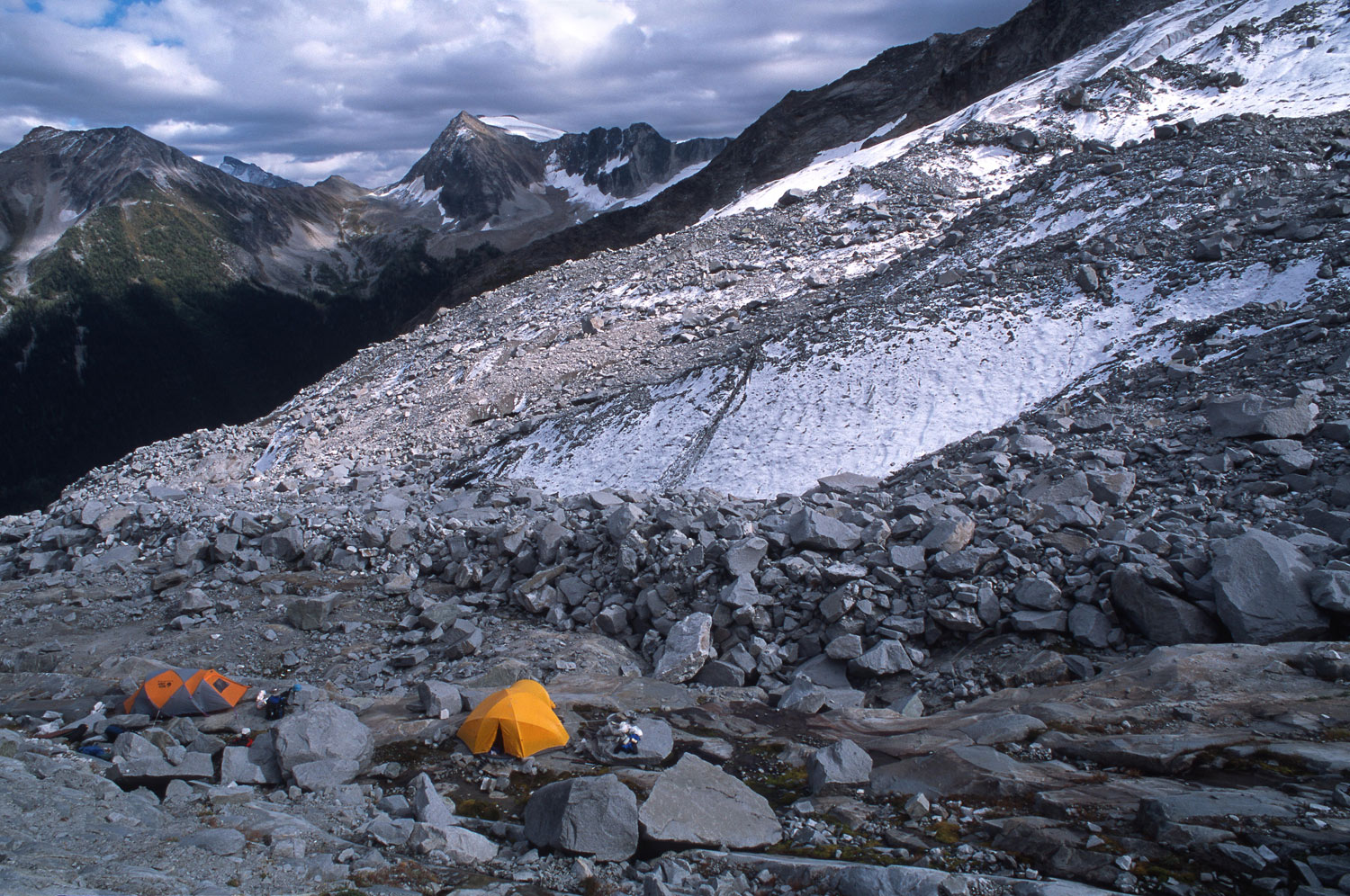 Behind a cliff edge, alongside a glacier. Bit rocky.. 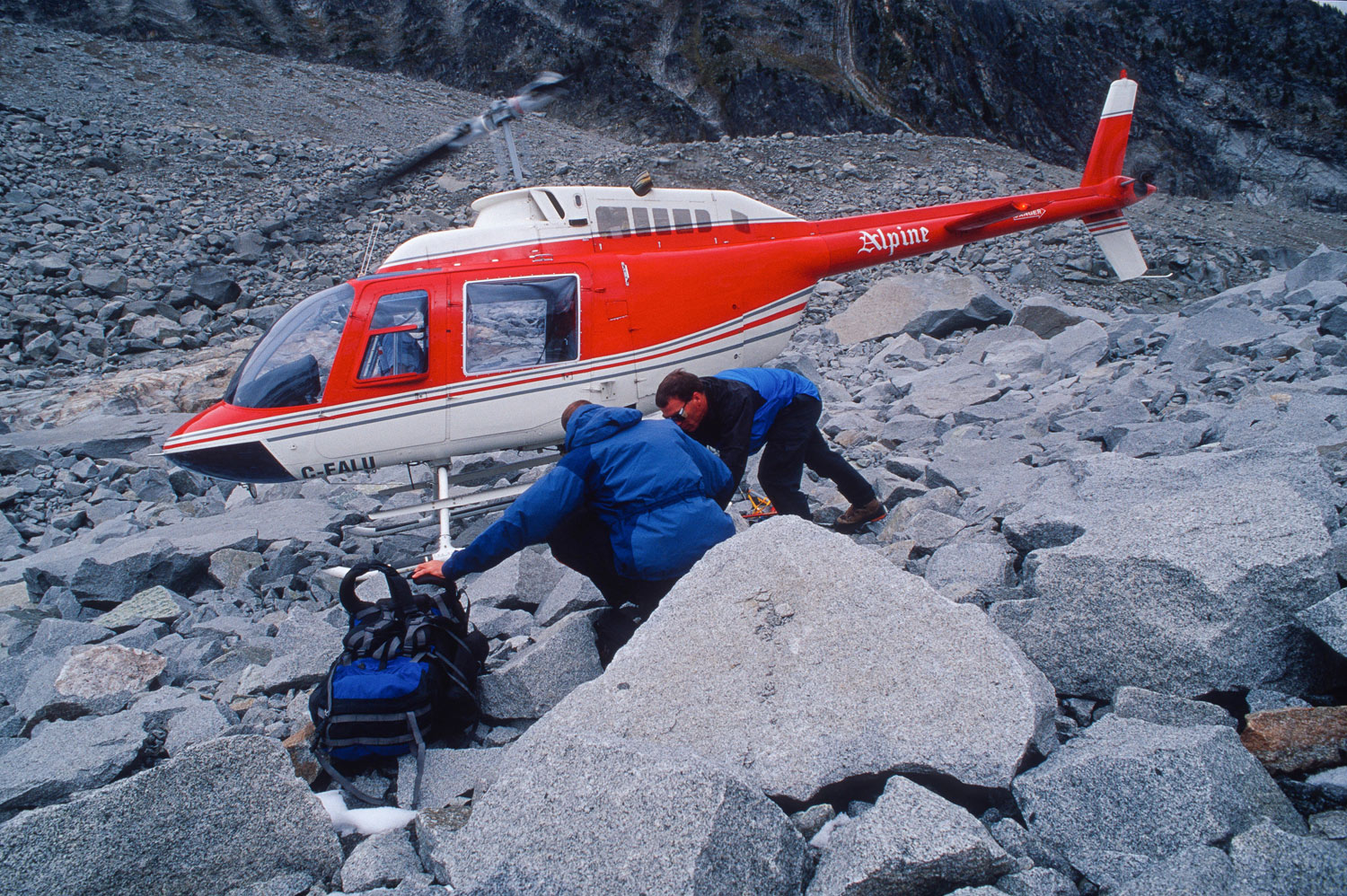 This one will be familiar to recent readers. It’s joined my collection of best campsites ever by dint of the fact that it was cold… that and the view. Having sweltered in temperatures in the high 30s Celsius at lower altitudes the genuine, and sudden chill as the sun set over the mountains was a complete delight :-) I will never forget this spot, nor the wonderful hospitality and dinner under the stars with Ahmed & Fatima in their hut nearby.

That’ll do for now… Oh, wait… I almost forgot… always fun and memorable to be camped somewhere cool at Christmas :-) 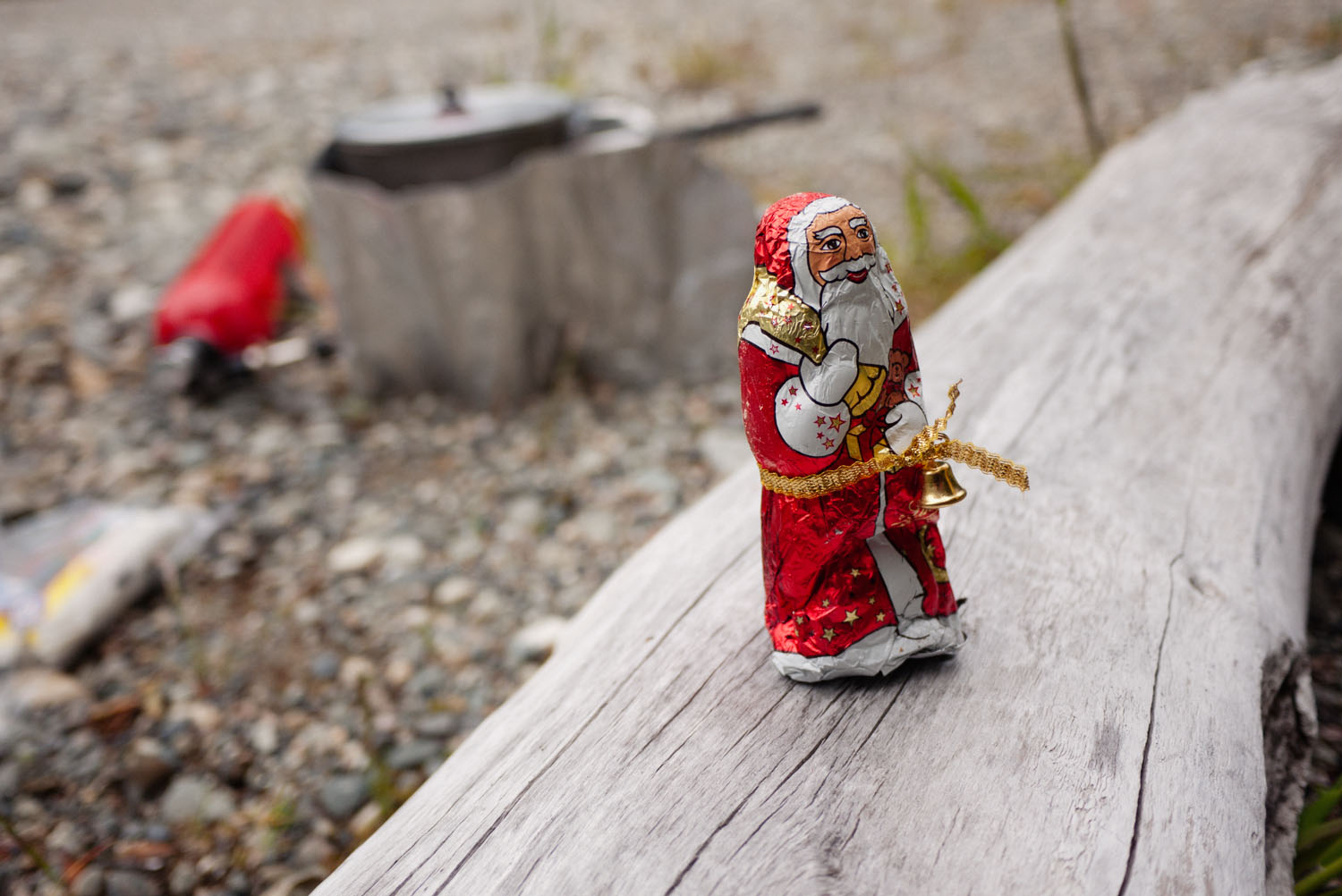 I’d have to get the map out to find the name of this spot.. it was by a big river and it was cold and raining. I had chocolate. I was happy.