January has been a somewhat uninspiring month; I saw a comment from my sister a couple of days ago saying how it “feels like the 194th of January”.. so I know it’s not just me.  Nearly at the end however and I should have some interesting “sewing of bike bags” news to share soon however. I’m also headed back to South America come spring because I like it there and this time, as it will likely be my last visit, I’m determined to catch up with some friends in Argentina who I’ve been promising to visit ever since we first met in Patagonia years ago.

Edit: A commenter mentioned climate change as a reason for not going. It is a very good reason not to and something I think about all the time. Is it OK to say “I can have a flight because in other aspects of my life I have tried to minimise my carbon output.. eg my house is powered by renewable energy, I use a bicycle instead of a car for 99% of my journeys, choose a primarily plant-based diet*, not wanting kids, and avoid frequent short haul flights, city breaks and so on…?” Probably not. Is it true that even with flying once per year my carbon output is still very much less than the vast majority of individuals.. probably.. is that an excuse. Not really. In the context of all the other changes I’ve made am I willing to give up my desire to travel by bike in remote and empty mountain places once each year and limit myself to that which I can reach by train or ferry from Cornwall for the sake of the planet? Aviation currently contributes about 2% of global anthropomorphic carbon emissions globally, and is responsible for about 1% of total climate impact since the industrial revolution. It’s significant, and growing rapidly, but it does at times feel like an utterly futile sacrifice until government, industry, sport, film industry, media etc gets its shit together.. and something needs to be done about bitcoin too.  Increasingly however I absolutely detest flying, I find it a miserable experience so perhaps my dilemma will solve itself. The only other solution I have is to move permanently. On the bright side I’ll be on my bike for months, living in a tent much of the time, eating locally produced food from village markets, and I suspect generating rather less carbon than if I stayed at home over that same period; western infrastructure by its very nature is carbon-heavy despite our best attempts to live lightly within it. This might be a good exercise for me to do the maths and figure out the overall ‘cost’ of a long bike journey with a flight relative to staying home.

In the meantime however my use of a camera has been “spotty” to say the least, lack of inspiration and all that, so no collective theme or anything, just a bit of a dump of stuff that would otherwise languish forever unseen on a hard drive until, well, it didn’t. Also an attempt to “squeeze one out” before the end of the month so to speak. 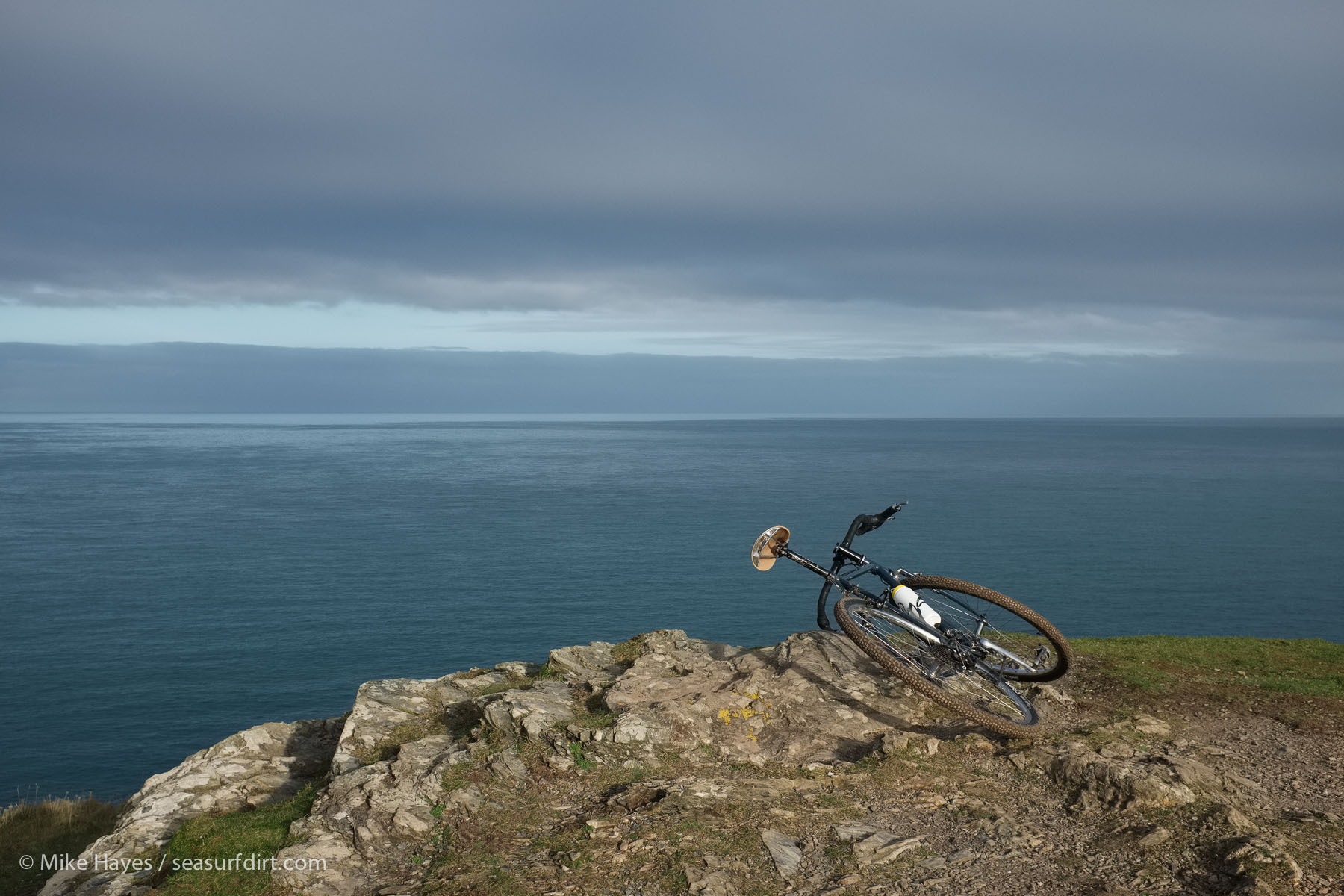 There was a spell early in the month when it didn’t just rain all the time, and the wind didn’t howl, and the trails were merely sticky rather than baby-poop sloppy. It was great.. feels like a distant memory. 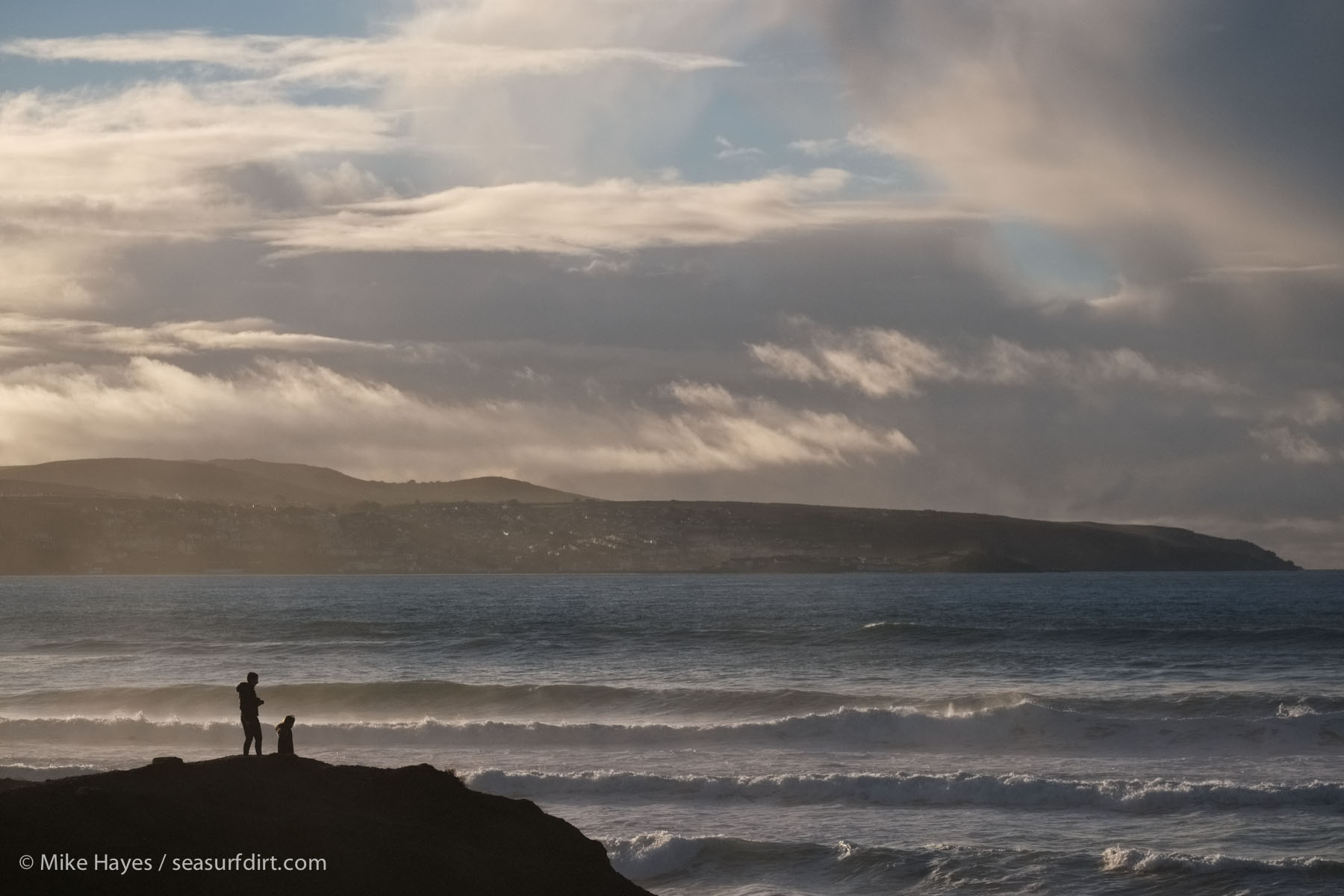 January did produce some good skies on occasion however… 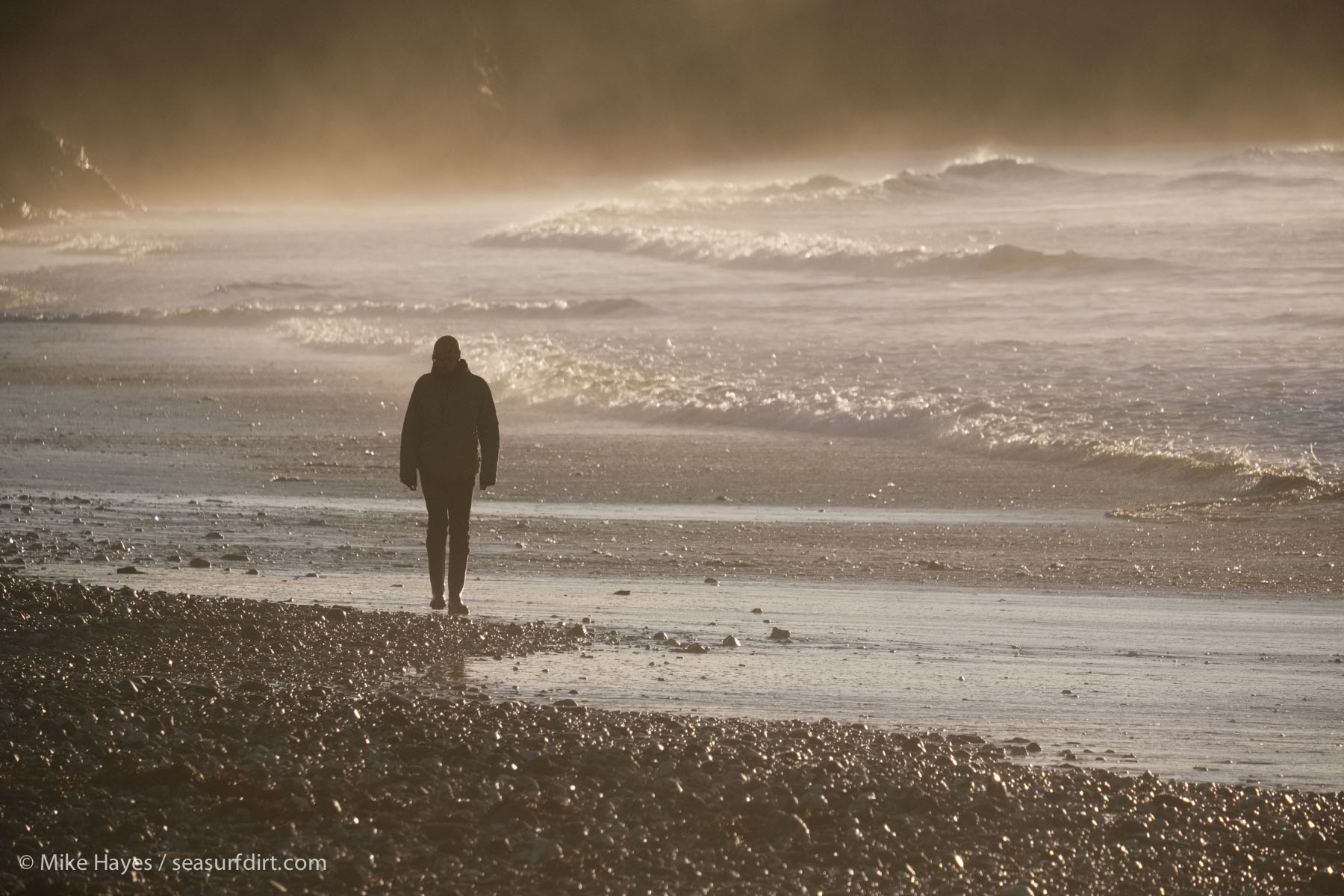 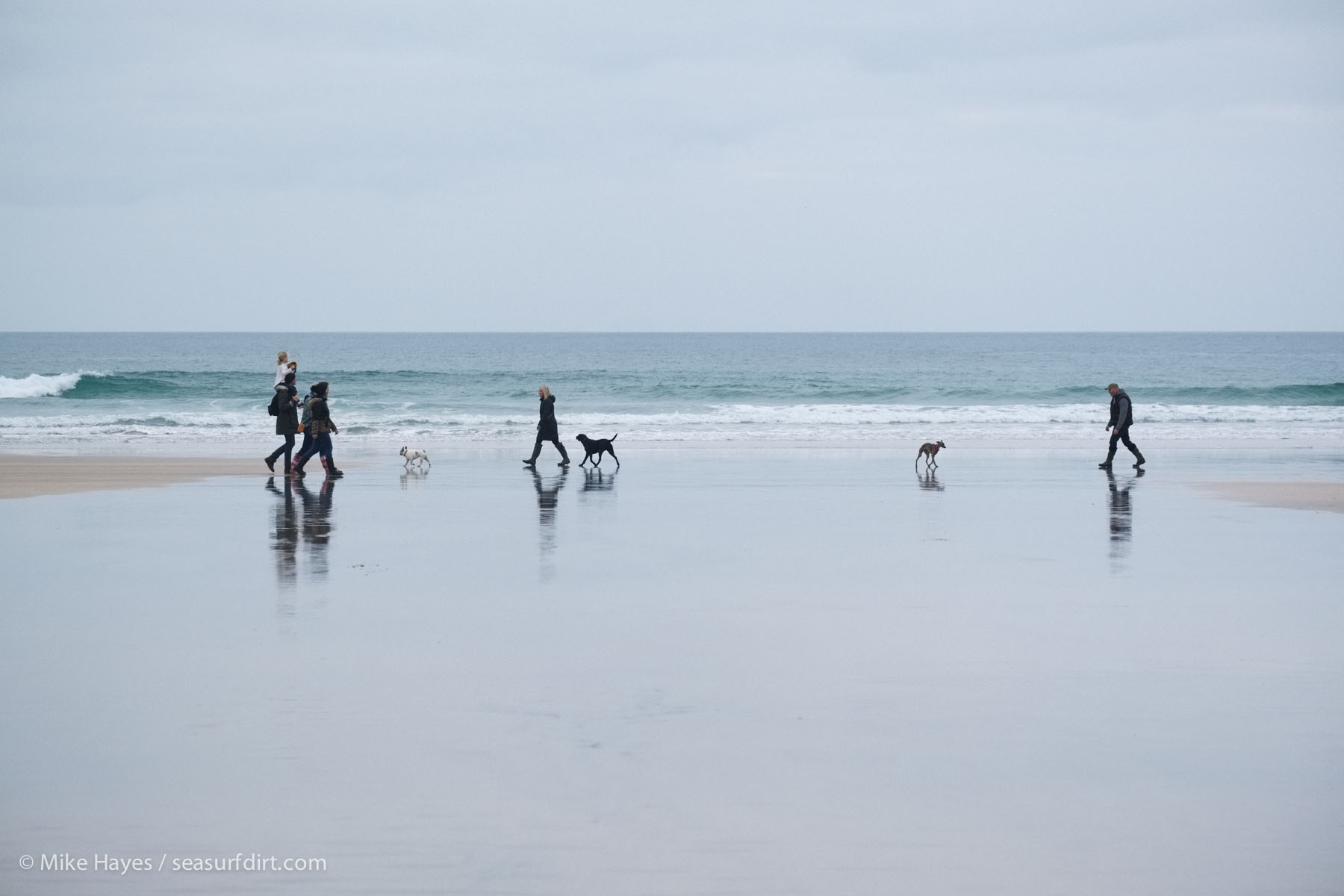 .. and about eleventy billion dog walkers. In fact, being on the beach without a dog at the moment is certain to attract suspicious glances… “what’s he doing here, he doesn’t have a dog..” as if there is no purpose to just being outside. Despite Christmas being but a memory, at least until the marketing engine winds up again around mid-summer, the bushes in the nature reserve behind the beach have been lovingly decorated with turds in little plastic bags. 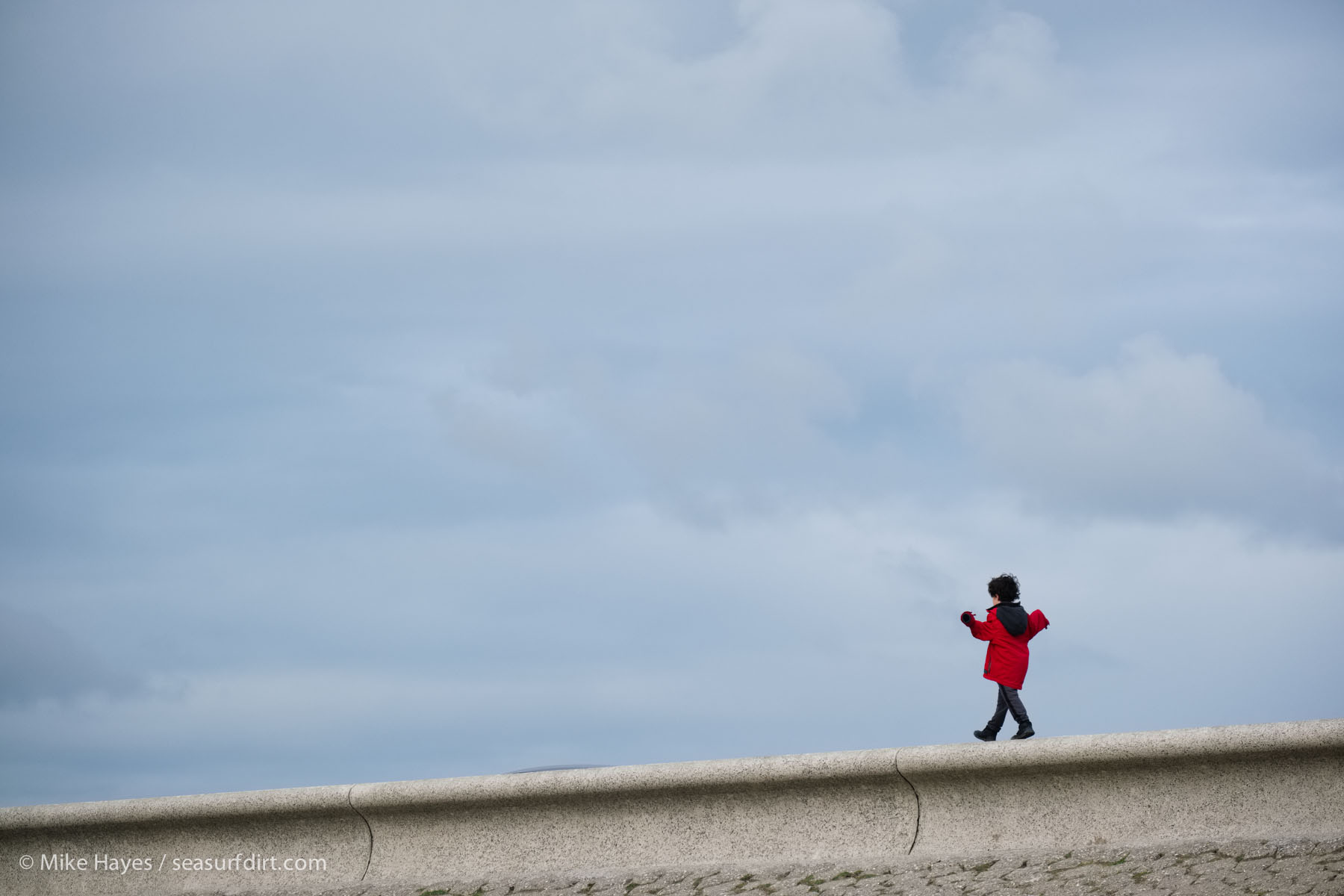 There is something that compels children to walk along the top of a wall, while being careful not to step on any of the joins. I do it all the time. 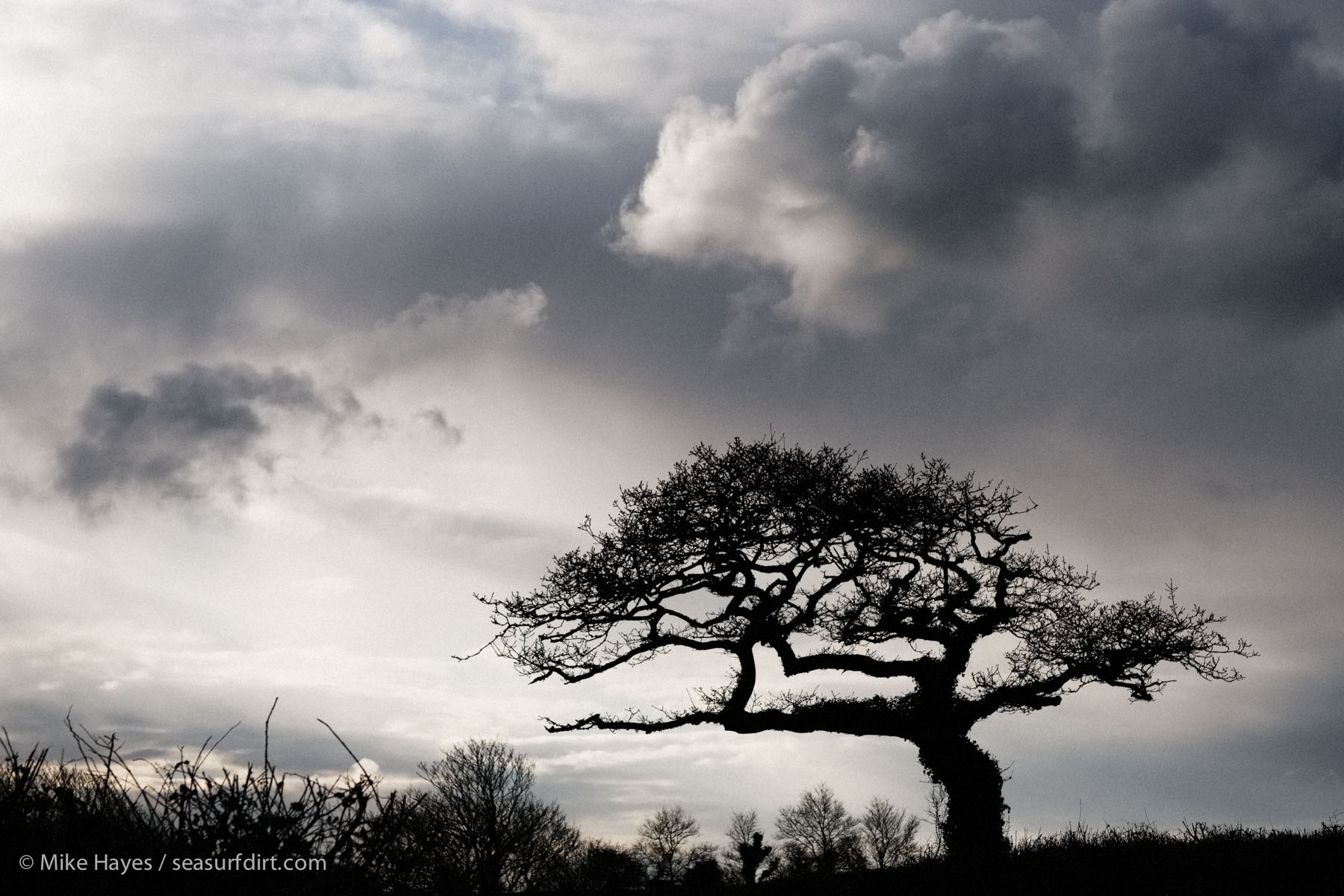 January tree. I ride past this fine krummholz specimen regularly.. and regularly think “I wish I had a camera with me..” and then one day I did… 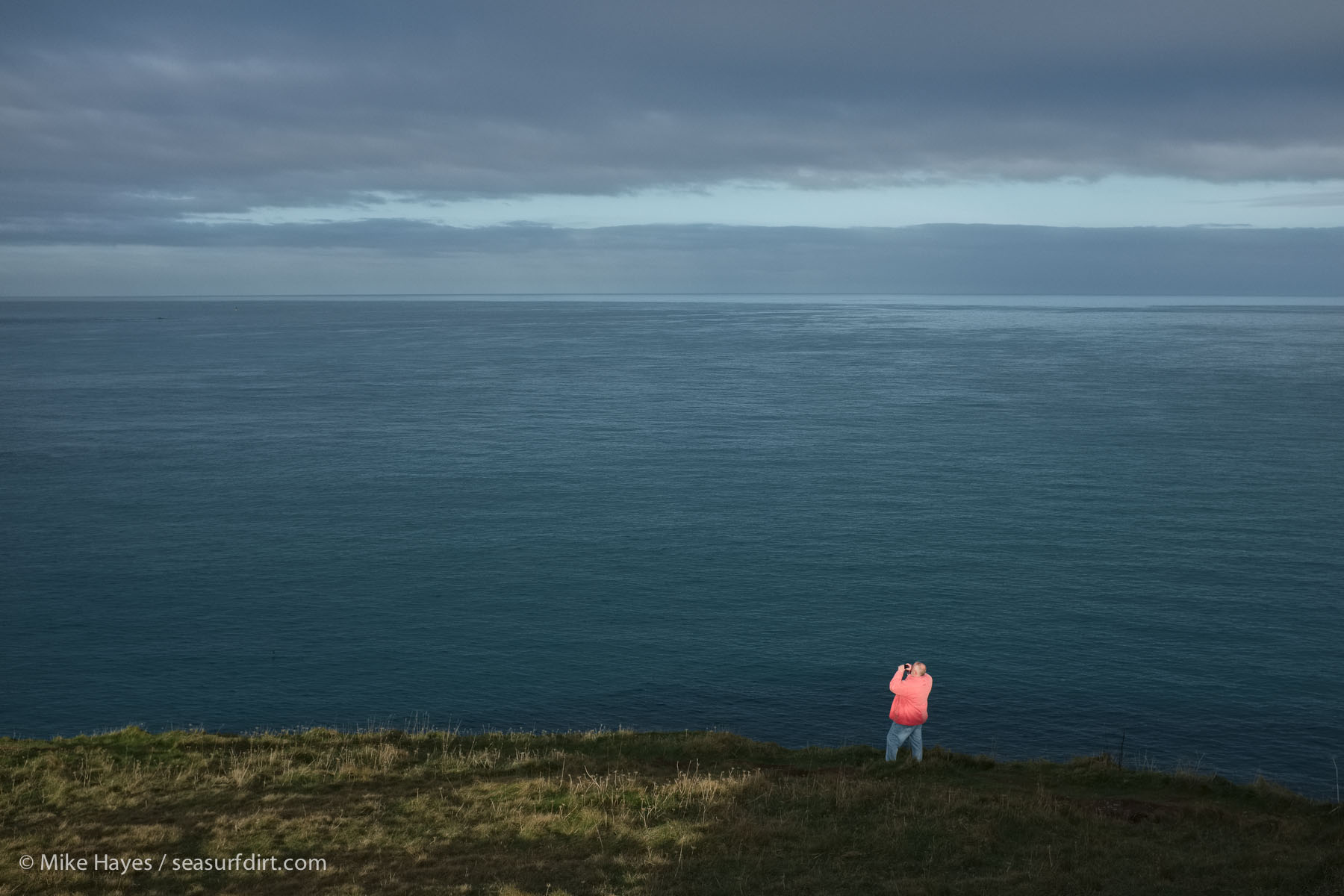 The “iphone photographer”. Apparently there is cachet to being such these days. It’s an amusingly odd thing in age of social media, one can apparently acquire cachet by either, at one end of the spectrum , using a late model iphone, or at the other by using a camera so obscure and idiosyncratic that no-one with less than the 27 fingers required to operate it will ever have heard of it. Anything else will forever condemn the user to a life of insta-mediocrity. Unless of course you take pictures of pugs at sunset… apparently that’s a thing.

There is a novel by Iain Banks called Consider Phlebas. It’s a science fiction novel, for which I make no excuses, Iain Banks stuff is just great, but I digress. In it an artificial world tears itself to pieces in spectacular fashion as a consequence of the actions of its makers. In that case however the inhabitants have the option of evacuating.

Just a thought, if news items like this make you go “what” then you might appreciate the opening passages of Consider Phlebas in which a ruling elite gather at the trough to feast on a sumptuous banquet for the purposes of drowning the protagonist, trapped in a cell far below, in an overwhelming tide of their shit. I think it might be called trickle-down…

*I think it’s important to note I am neither vegetarian or vegan. I make choices about what I cook and eat at home or out that are primarily plant-based. But I also eat local eggs and local sustainable fish – mackerel, sardines.. that sort of thing. If I’m visiting friends or family and I’m served a slab of beef I’ll happily eat it. I don’t feel as if I should force my choices on others. Not at the moment anyway ;-)