It has been a while since I posted anything of a sea kayaking flavour; when I have been out I haven’t been taking a camera. Sometimes I just can’t be bothered with a camera, it’s nice just to go paddling with mates without thinking about photos. After all there is no particular imperative beyond just having a few snaps by way of a record of a good day out with friends.  My camera isn’t really the perfect tool either – I use my old Fuji x100s in a housing. It’s a good camera, albeit a little slow to respond at times, but is very bulky in the housing – it lives in a  deck bag which I don’t always want on my deck, and I need both hands for it which means when conditions are lively it can be tricky. The wide angle 23mm lens means I have to be pretty much right on top of the action which can produce terrific pics with a feeling of being right in the thick of what is going on, but manoeuvring my kayak into tight spots in rough water while handling the camera can be a little bit tense. That is why there are never any pictures from when conditions are particularly fun. I keep telling myself I’m going to invest in something a little more compact with a zoom, something like a Canon GX7 in a housing appeals, but that is not a cheap thing and while the x100s is still functional I just keep going back to that and ‘making do’… 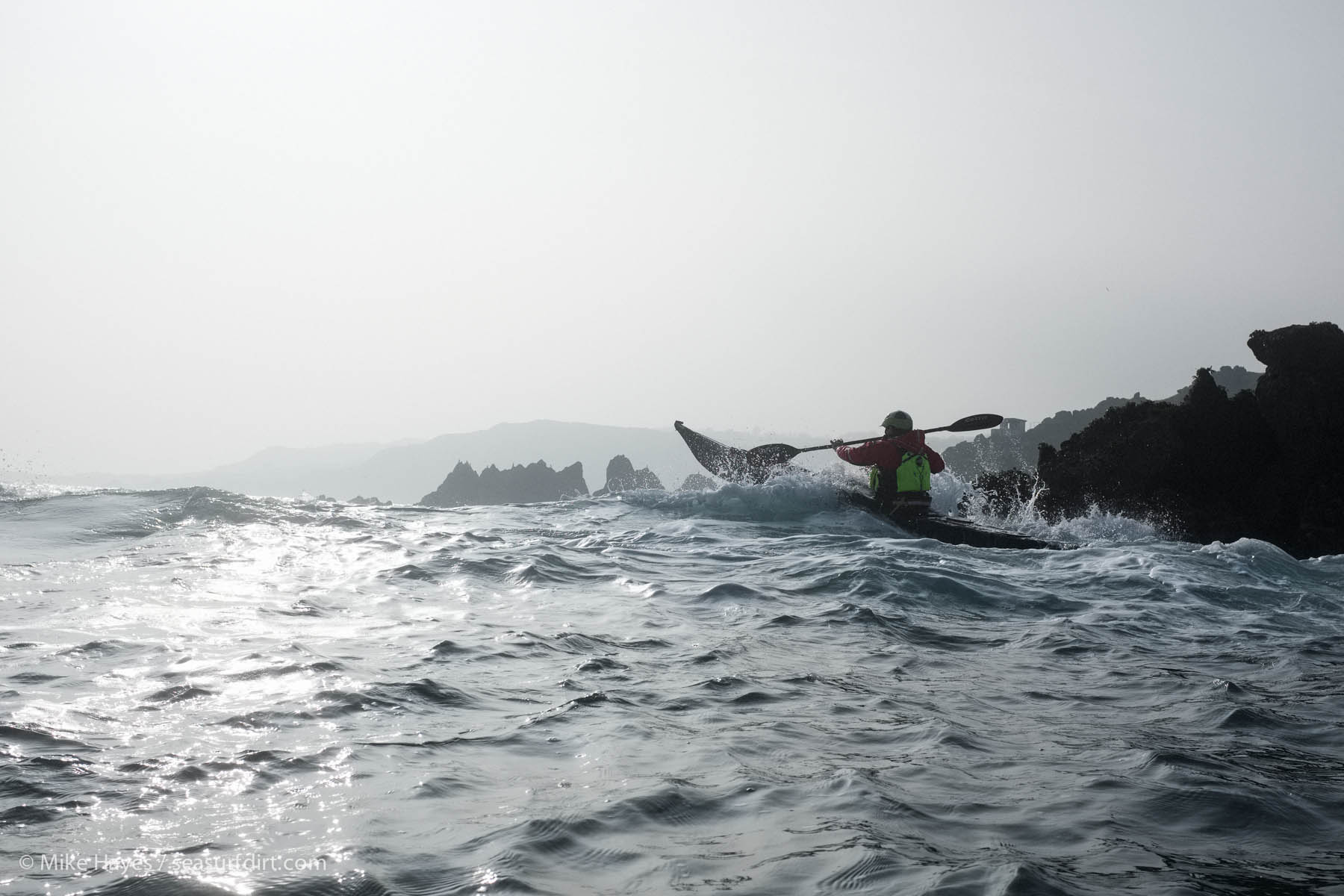 We launched out of Porthoustock on the eastern side of Lizard Point. It’s a handy, sheltered winter-time launch spot for when conditions further west, exposed to the full force of the winter Atlantic swells, are just a little too heavy. The swell yesterday was 9 feet at 14 second period. Solid enough to make the western side of the Lizard “difficult” to access directly and kind of pointless to paddle since the only option is to stay offshore and well clear of reefs, hazards and ‘interesting spots’.

Yesterday then, after looking at the housing on the shelf, I decided I could be bothered to take it along, a decision that proved to be somewhat fortuitous. While the photos are not great, try photographing fast moving, unpredictable dolphins with a wide angle, it is not a frequent occurrence to be caught up in a pod of dolphins hunting. Dolphin sightings from a kayak are a reasonably regular occurrence around here but mostly they just pass by and rarely come to say hello; although that did happen once. I’ve never had the opportunity to watch dolphins hunting at close quarters however so the 10 minutes they spent yesterday jumping, diving under and around the kayaks was a rare opportunity to enjoy. They appeared to be after a shoal of garfish; I’ve never seen garfish jump quite so high as when a hungry dolphin is on their collective tails.. Good fun.

The day was pretty nice too. Some decent swell to play with and an early fog lifted to reveal a mild, spring-like day. As to whether I’ll now decide to fork out for some new camera clobber for on the water… no idea. 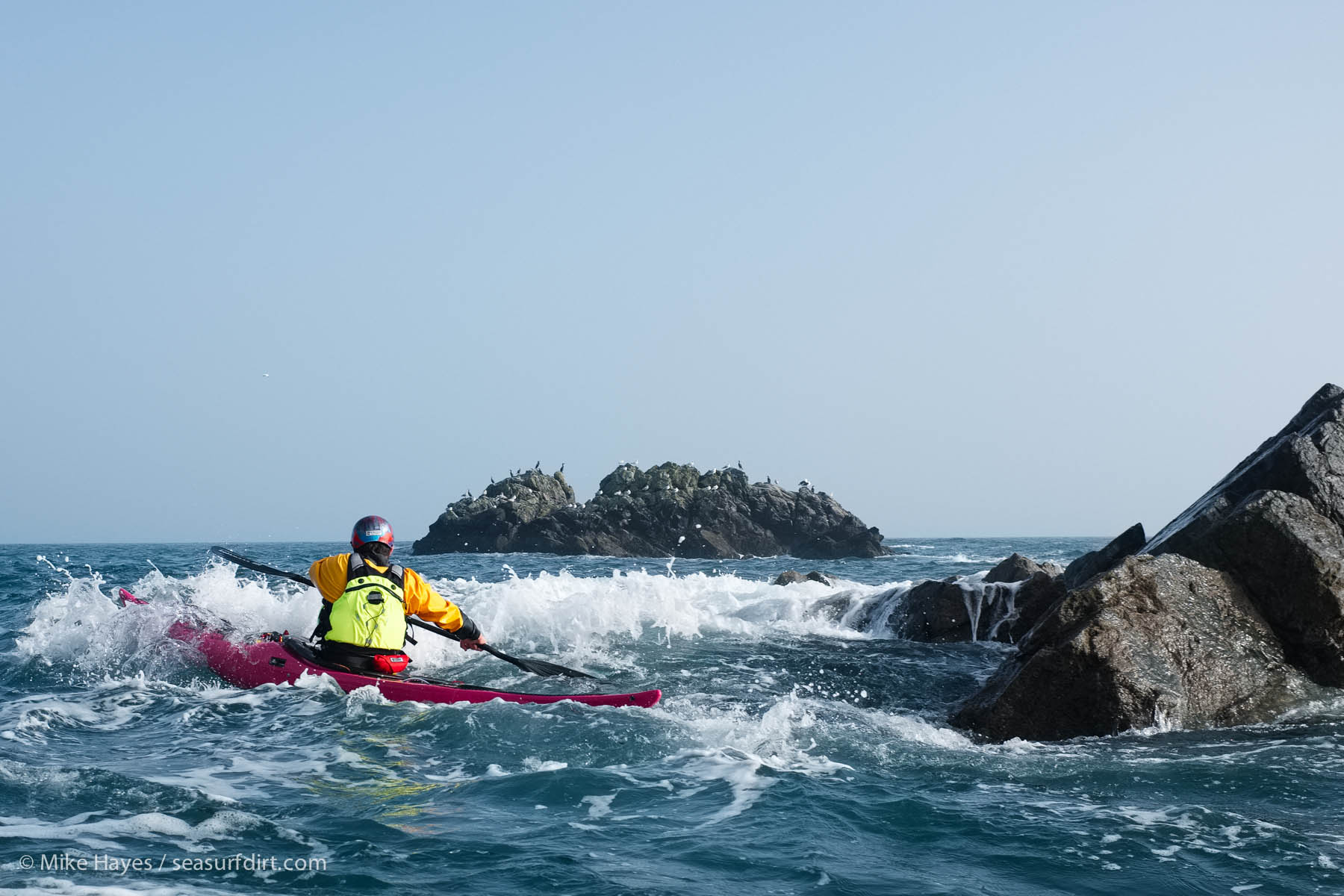 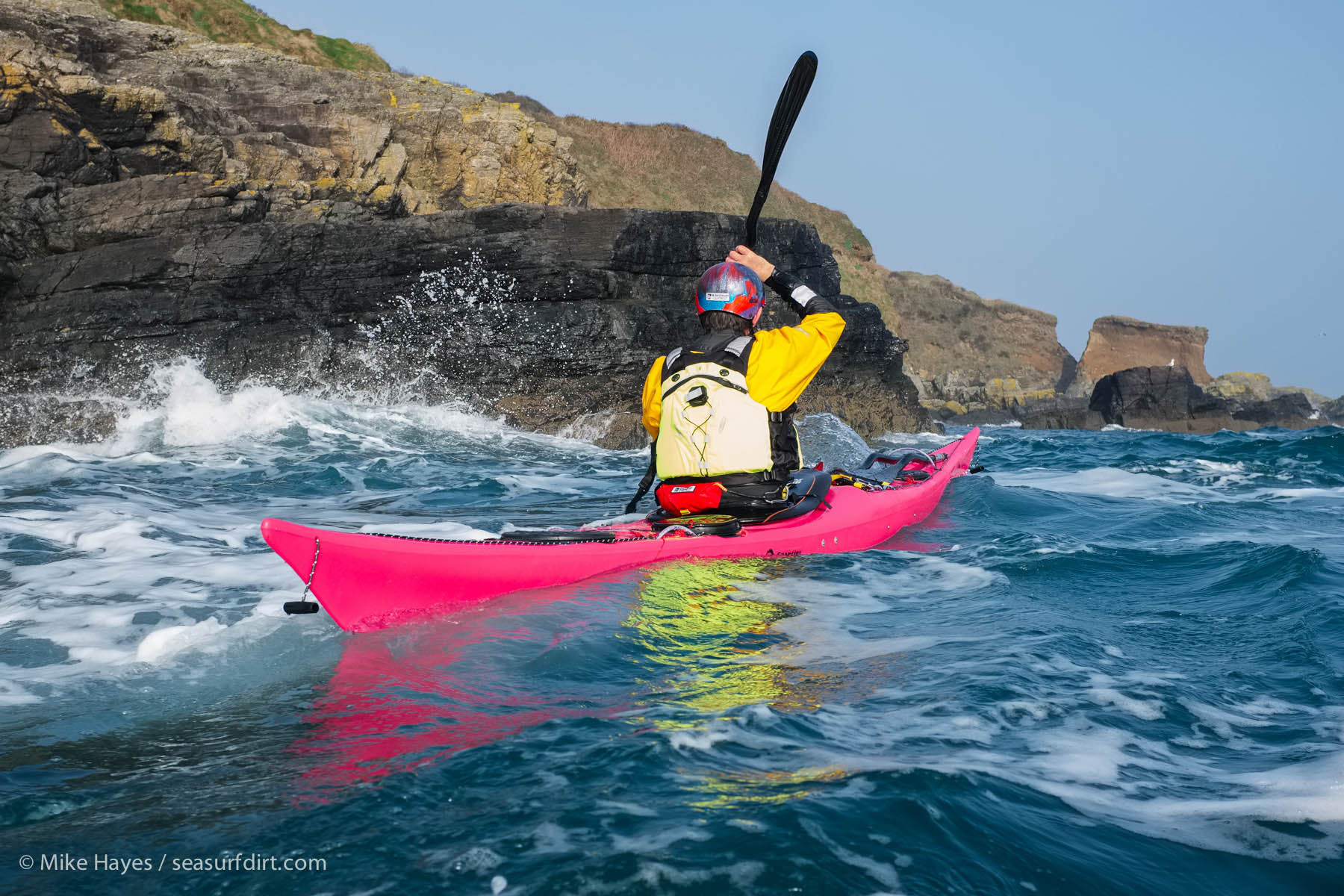 Steve was at the helm of a new SKUK Sportive. It’s a plastic derivative of the Romany Classic; much lower in volume than its popular, and highly capable sibling the Romany Sport. Being much stiffer than most plastic kayaks it paddles as well as the composite version and looks like a great option for rock hopping – with a great deal of ‘bouncability’ and able to soak up a terrific amount of punishment. Other colours are available.. 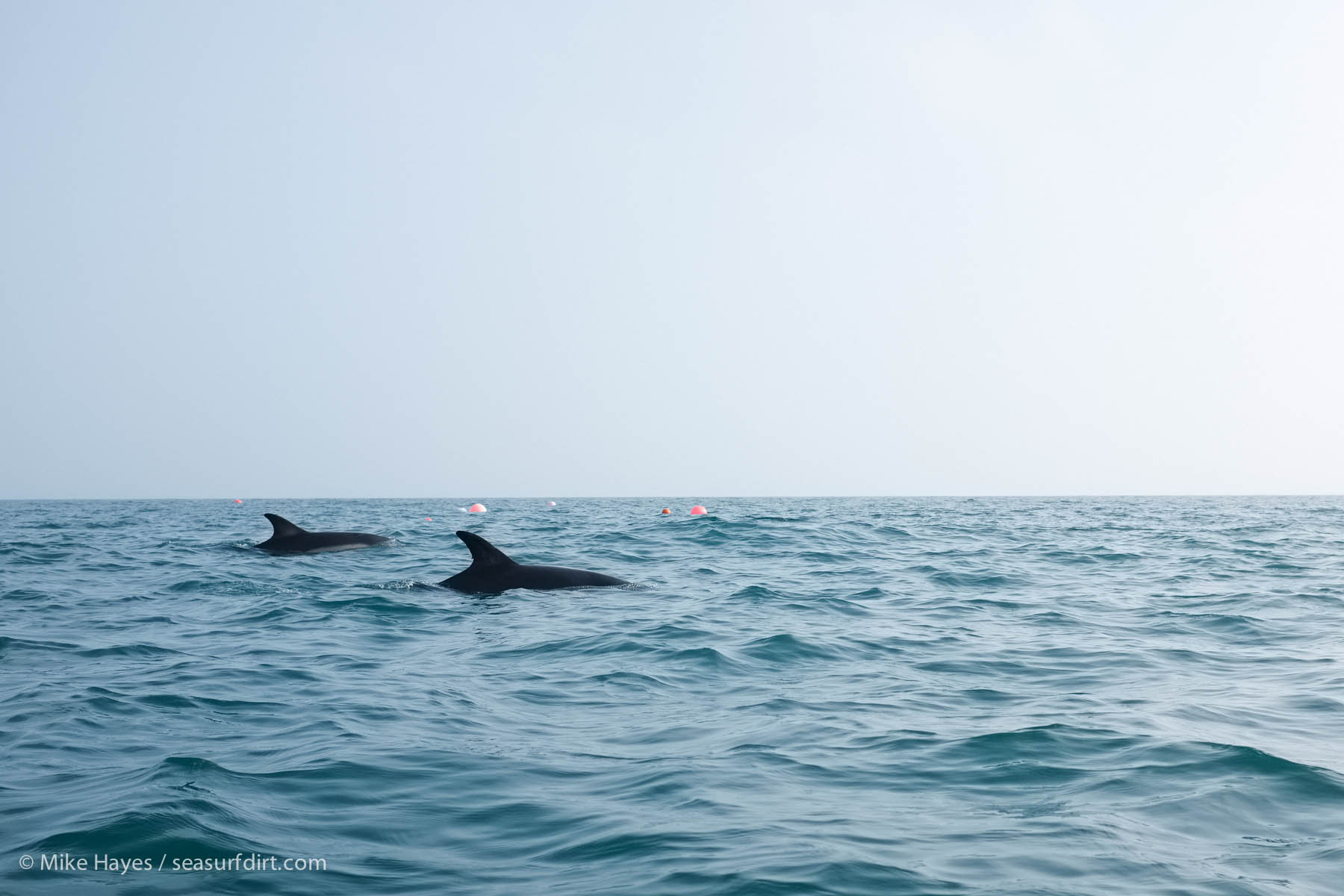 Those dolphins. It was a small pod, perhaps a family unit, of 4 or 5. 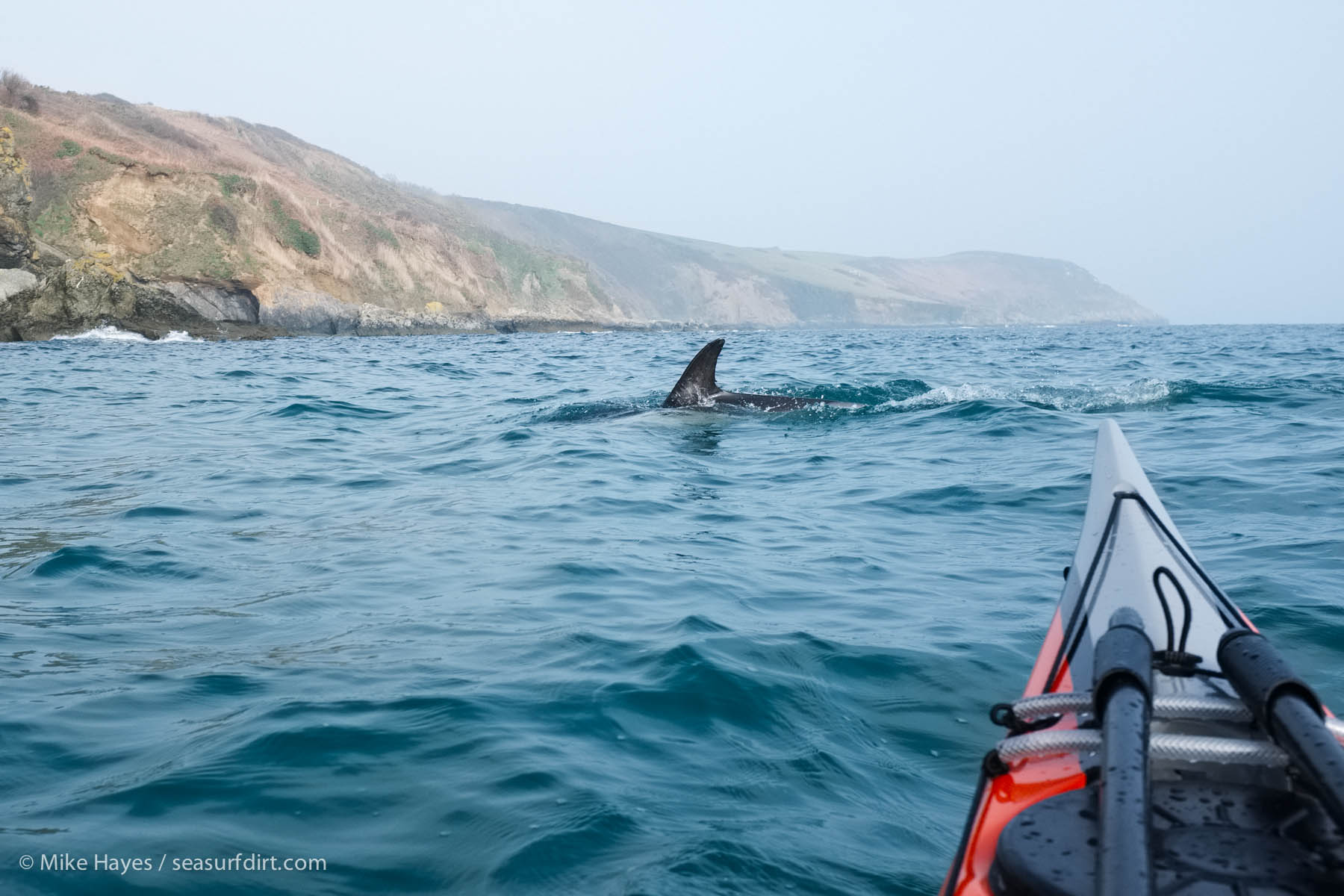 These were ‘Short-Beaked Common Dolphins’. Hard to photograph on an opportunistic basis with a camera best suited to street photography. 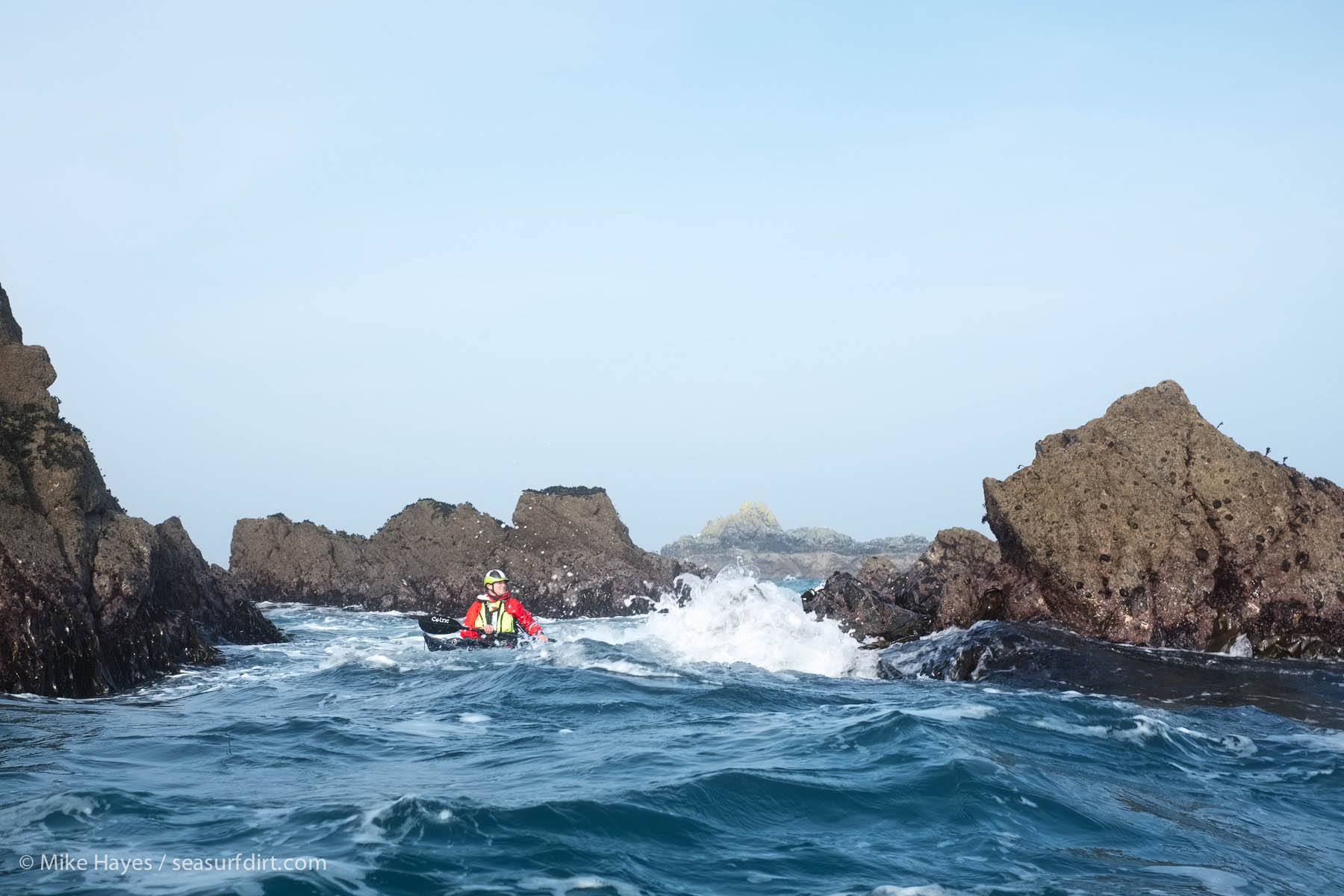 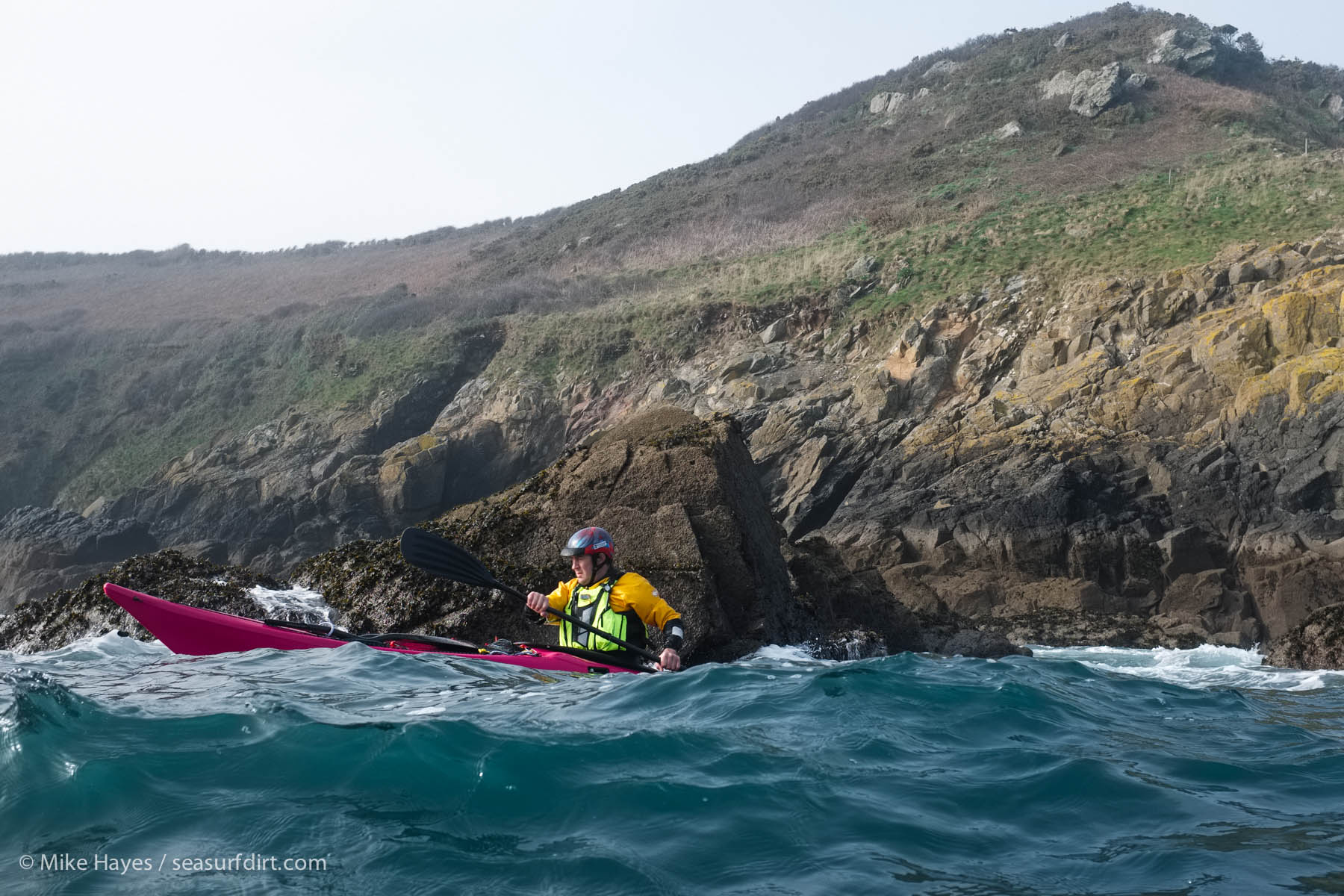 .. so I could just label all these other pics as ‘context’.. 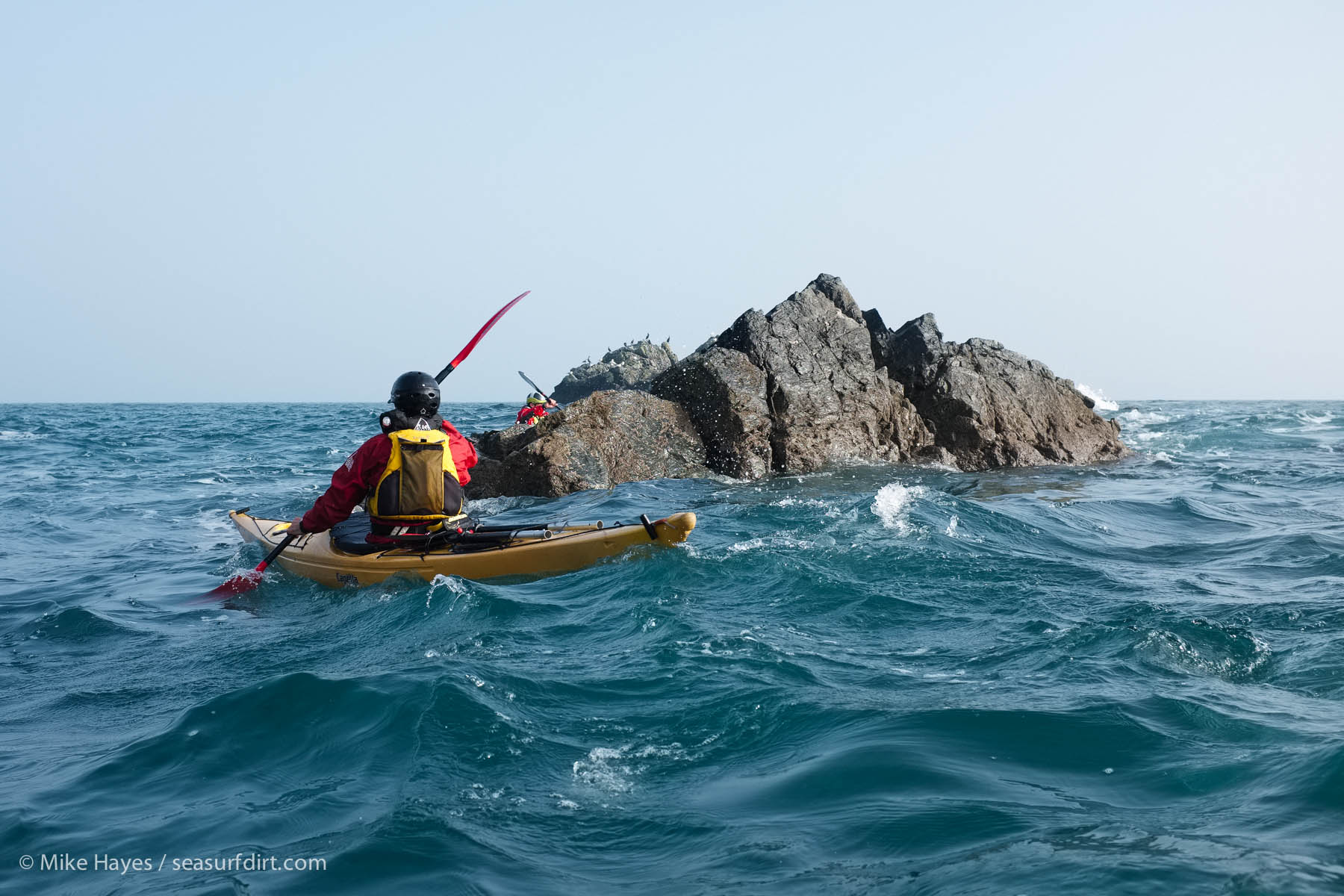 It is a great bit of coast with some good play spots that generally we only visit in the winter. In summer it’s usually flat calm unless an easterly wind is blowing or a big spring tide means the Manacles Reef tidal race is working. 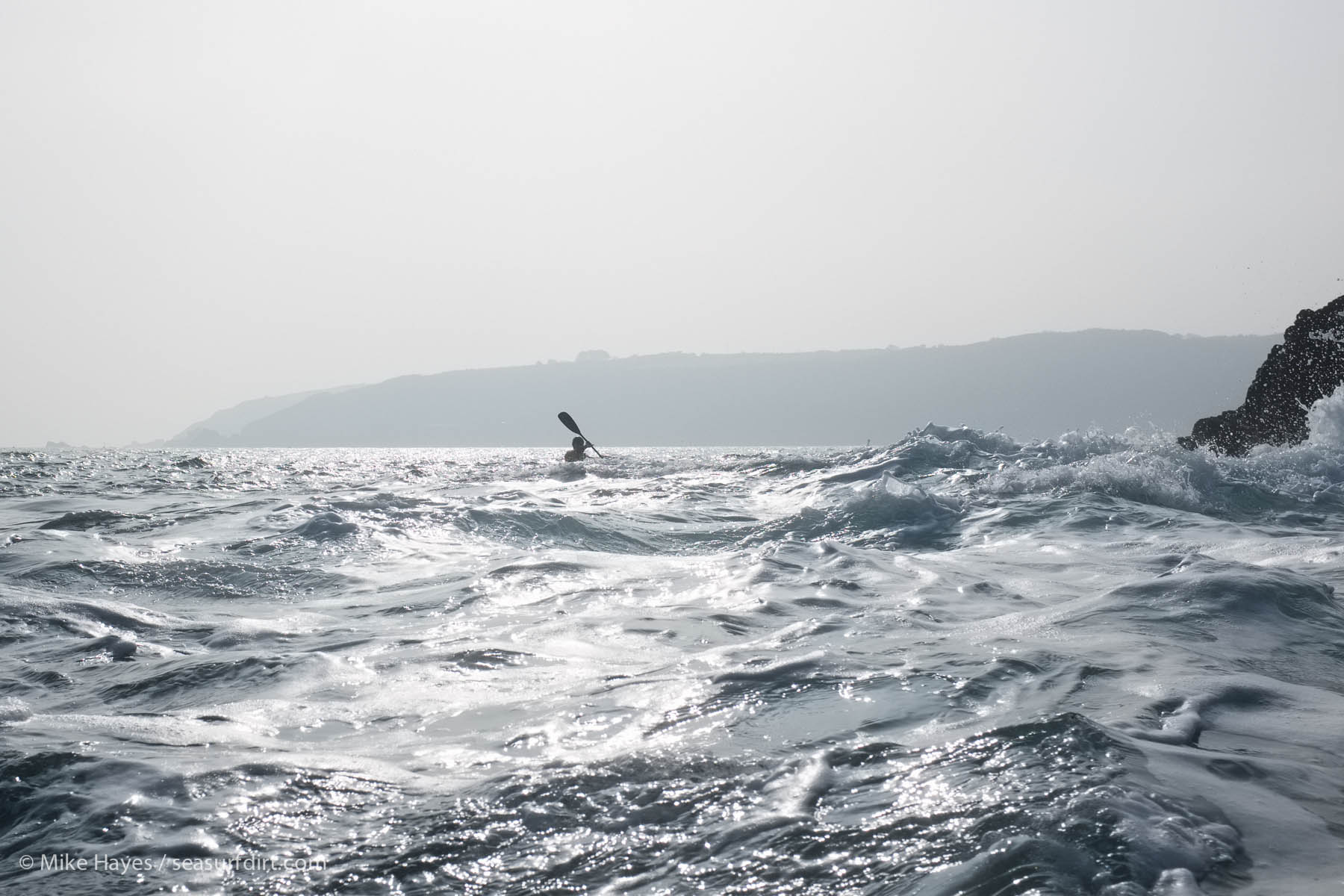 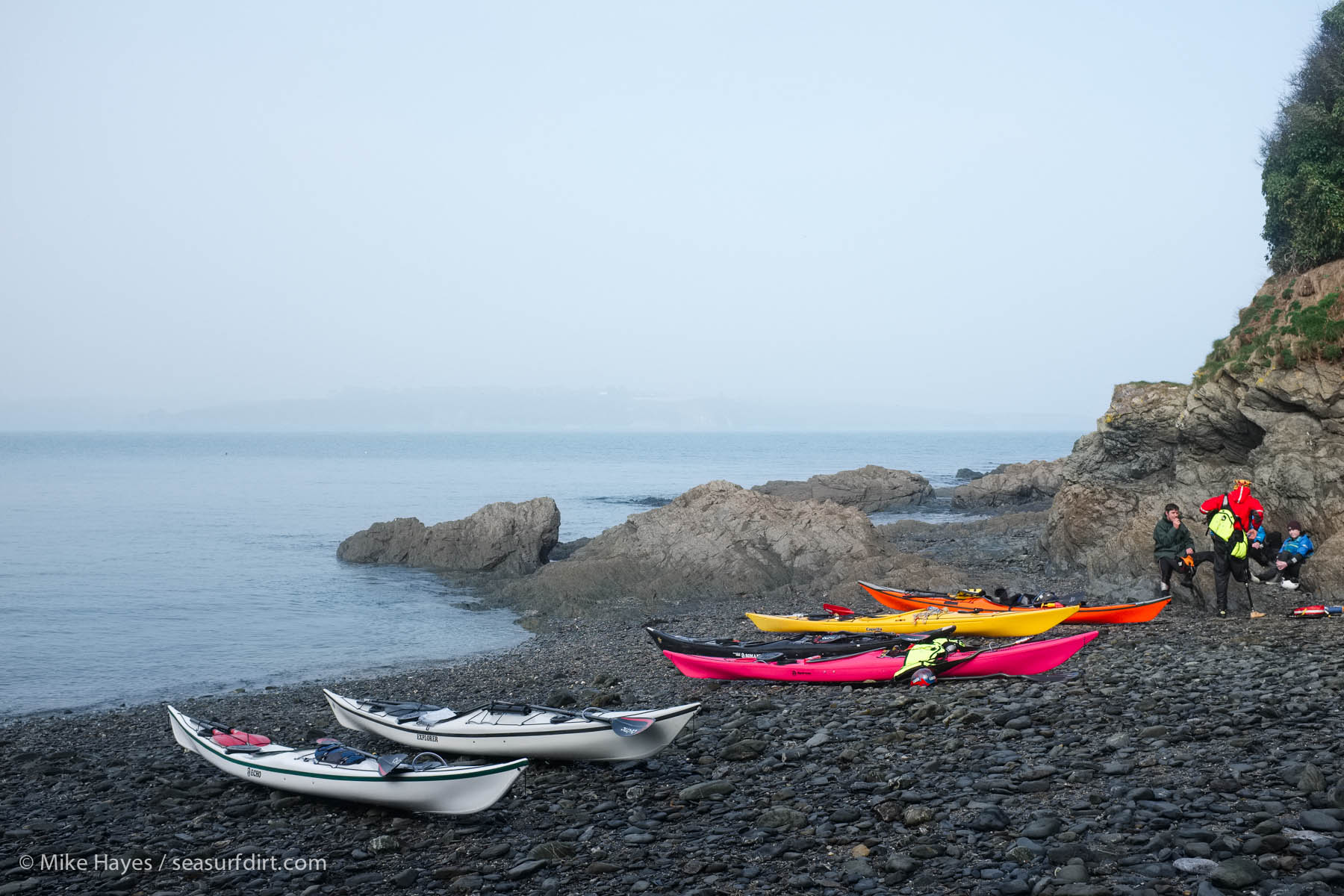 Lunch on a sheltered beach just inside the Helford estuary. There’s a bit of a fruit salad of colour going on at the far end of the beach.. 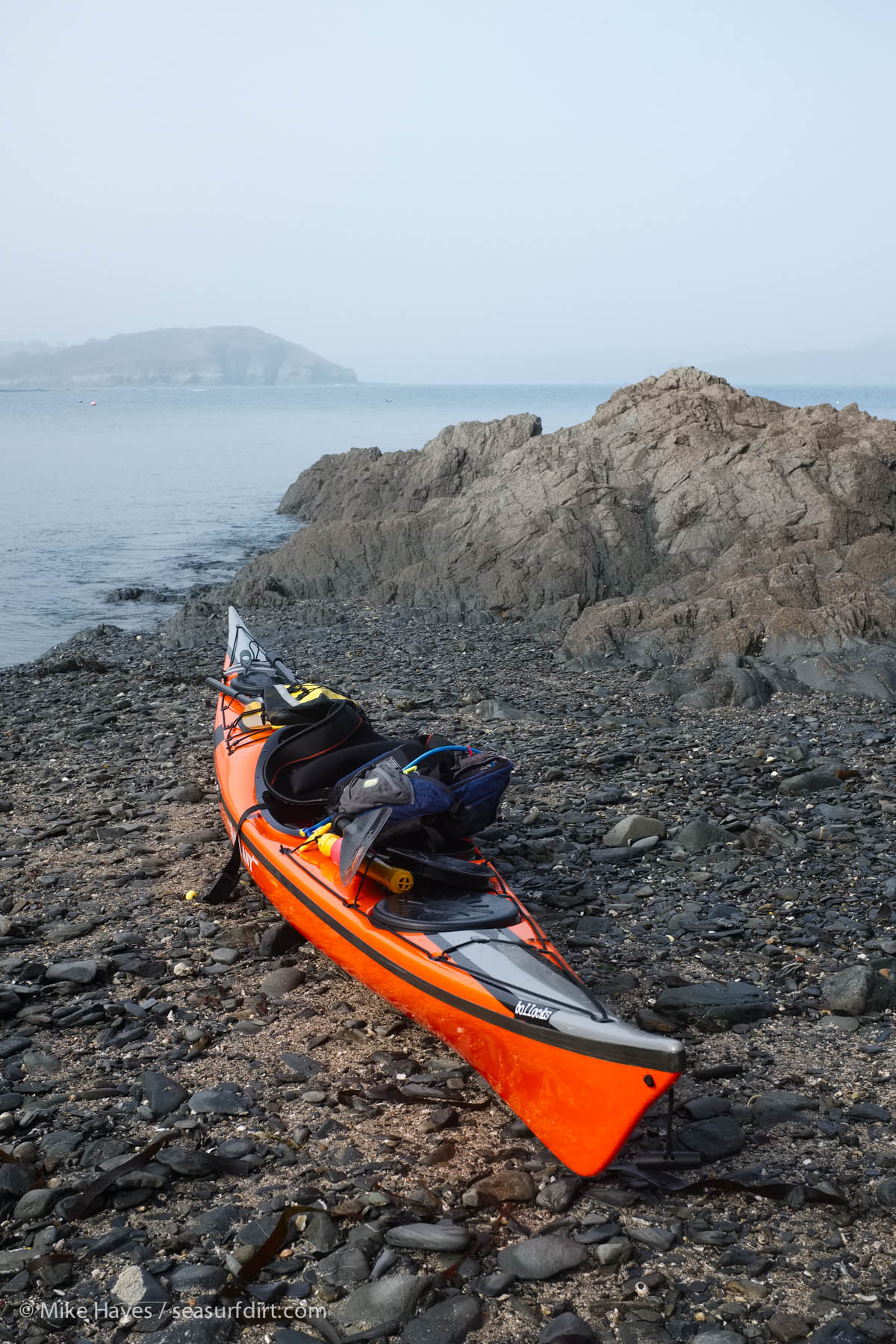 My Romany Classic. It’s an evergreen design that has been around for decades. This is my second, and having paddled a whole bunch of other kayaks over the years it is still IMO the best rough water kayak for someone of my build, with it’s higher volume cousins, the Romany Surf and Excel, having just as good a reputation. 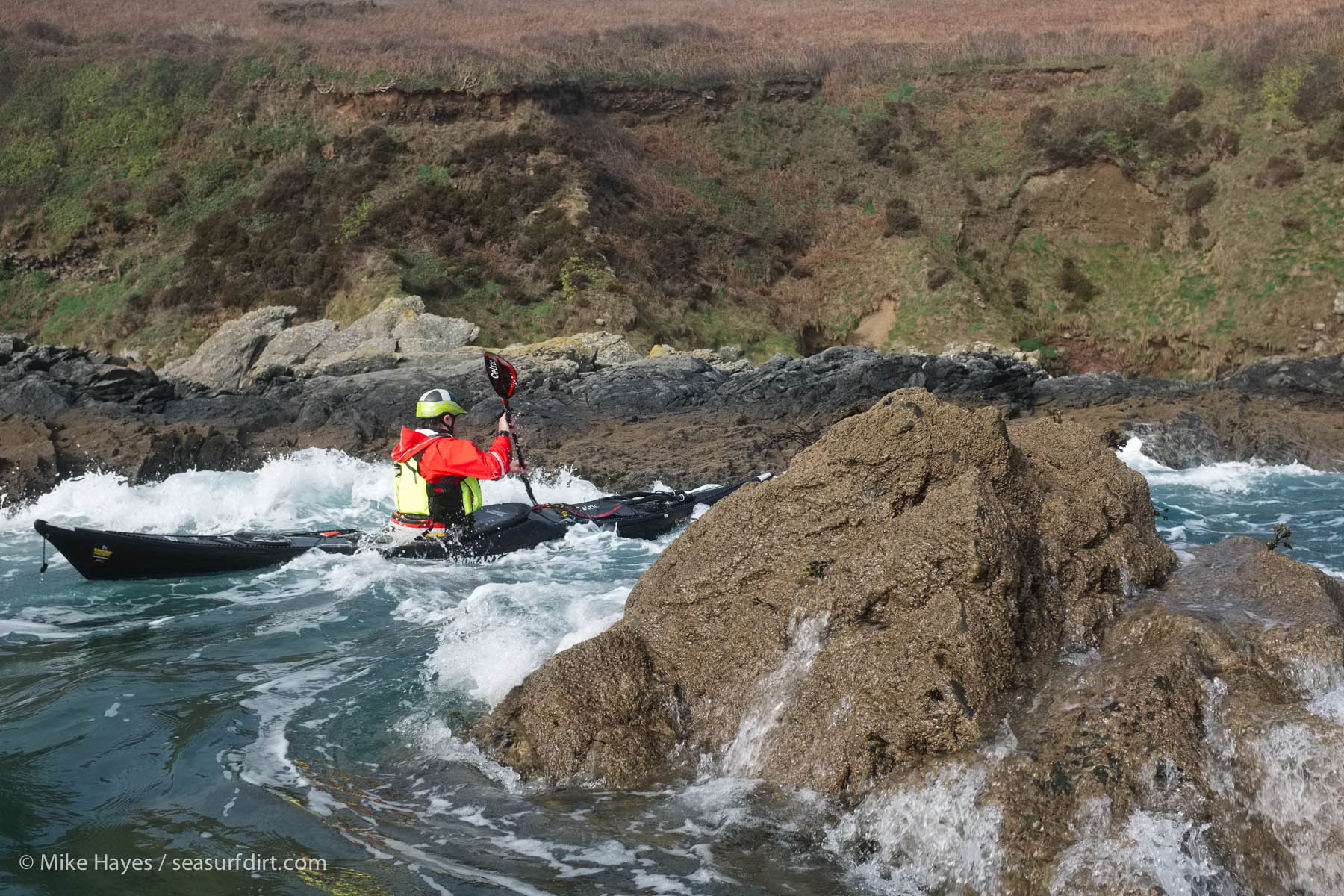 More swirly bits. This is a Romany Surf in carbon kevlar with many, many scars; it has proven itself capable of withstanding an uncommon amount of bashing. All SKUK kayaks are made in the UK too which is excellent. 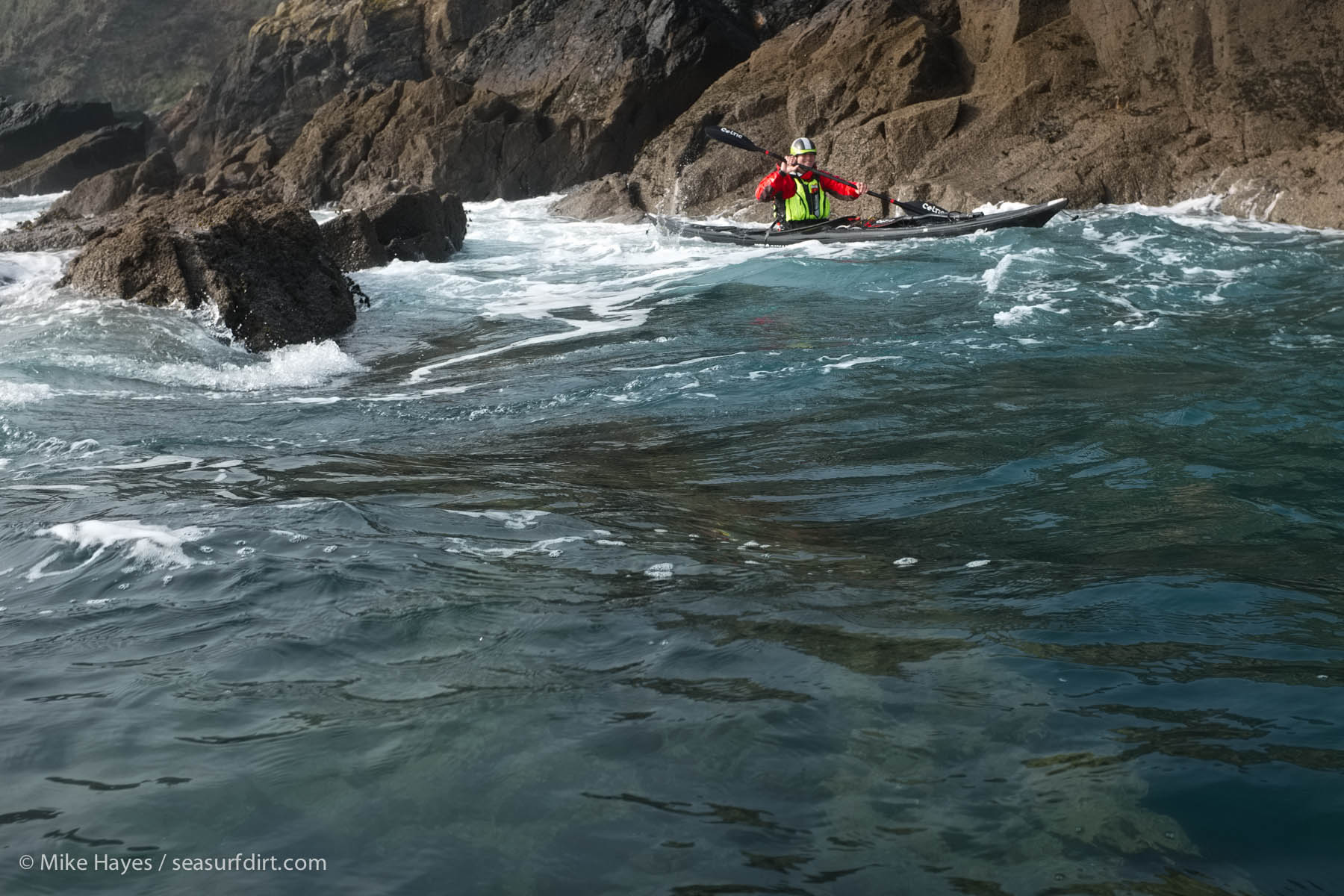