So… here I am in Mendoza, stage 1 complete 1 month and 1958km from Puerto Montt… I’;ve been very productive this morning and now kicking back with a coffee… I’ve dumped my stinky riding gear at a lavadero to get it properly cleaned, I’ve shaved the last 2 weeks worth off, got a haircut to help with cooling on the road, lol, and bought a new toothbrush – all exciting stuff :-) I also treated myself to the luxury of a second t-shirt since Mark whom I met here last night commented how little stuff I had… hehe.

Mendoza is nice, feels like I could be in Barcelona to be honest – wide, tree shaded boulevards, pretty plazas, pavement cafes and so on. Most of the city was flattened in the 1940’s I think by an earthquake so it all feels quite modern. I like. There was a thunderstorm here last night while we were out, it felt fab to feel the rain.. the last rain I had was nearly a month ago in Puerto Octay. 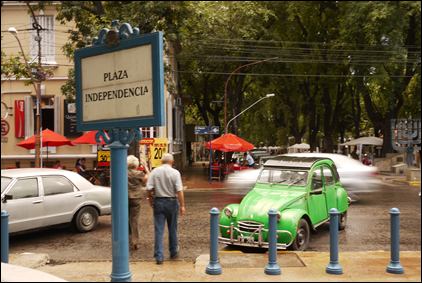 As for the last couple of days on the bike… my diary follows:

13 Feb…. for once 13 was a lucky number for me, the heat of the last couple of days broke to a more sensible 30 degs or so and I rolled out of San Rafael this morning with a light tailwind… :-) On leaving the city limits the scenery abruptly turned back to desert, no more of the greenery I’d enjoyed on the way in to town…. the road was also steadily uphill for the first 70km but with a freshening tailwind I climbed the 1000 metres in elevation gain mostly on the big ring and in less than 3 hours… At the top of the climb I stopped for lunch and was reminded of the increased altitude when I opened my tube of sunblock and lost half of it as it squirted out… I always forget about that, and especially this time as the height gain was so modest.
When the road levelled out on top of the rocky plateau I really had a fresh breeze at my back and was cruising happily at between 40 and 50km/hr for a further 35km or so until the road turned north at Pareditas and the tail wind became a cross wind… but moderated by the rows of trees along the road… at Pareditas the desert abruptly ended once again and I was back in a lush, fertile landscape riding along to a soundtrack of birdsong – quite beautiful – although the desert was never far away, always visible through the greenery just 100 metres or so to my right.
From Pareditas I settled into a steady cruise of between 26 and 30km/hr… making such good time felt great and I took some time out at a roadside cafe to watch 20 minutes of a very bad movie… standard super-intelligent man eating shark goes on the rampage type of thing… a lot of South American cinema is superb but not in this case…. Here also I was admiring a beautifully “fatigued” 1970’s Ford Falcon when the owner came over to admire my bike, lol. His car was super, there are a lot of them about – in such a dry climate these old American classics don’t rot away, instead they just become “abraded, faded and fatigued” by life… this example had precious little paint left. Like this they look better than the occasional mint-condition one I’ve seen around. Same goes for the vintage pickups too. I’d love to import one to the UK but in Cornwall’s damp, salty air it wouldn’t last 5 minutes. 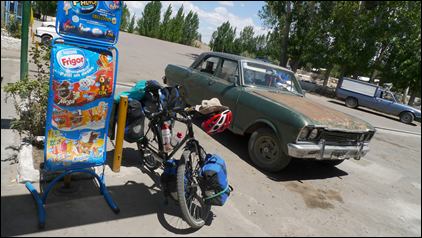 So not much to report really, not an exciting or particularly challenging day… just one of those days for getting from A to B such as are an essential part of any bicycle journey. I arrived here in Tunuyan after 158km and 5hrs 40 mins.. a fast day despite that climb, it felt easy at the time but I must have been working hard, my legs (and head) are really rather tired this evening. As I write I’m in a bar in Tunuyan having just polished off a large ‘lomo completo’, it’s a busy provincial town much bigger than I expected. I had a burger earlier on the way into town thinking it was just another strip along the highway, found a place to camp amongst rows of shady trees about 3km outside town and then came in search of food… and discovered the bustling town centre. Total for the day was 170km once I’d ridden around looking for a place to camp and gone hunting for food. 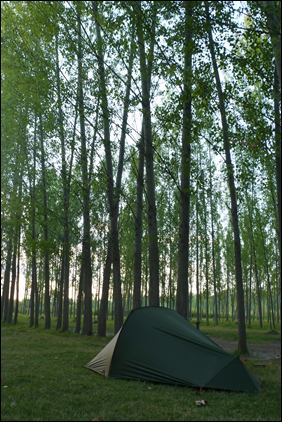 functional camping rather than beautiful...

Just 80km to Mendoza tomorrow and a proper rest and some socialising:-) Having said that San Rafael was good… it felt odd being in a backpacker type hostel after so much time away from that scene, the first night I was tired and didn’t care but by the second night I knew I’d been accepted when the maté gourd came my way during the lazy afternoon.. :-) Also another good opportunity to practice my Spanish on a captive audience who were also keen to learn some English :-)
14th Feb…
Hmm, Valentines day, for what it’s worth I didn’t get a card from my bicycle and my bicycle didn’t get one from me. We have an understanding you see…
Today then was the final stretch to Mendoza, which turned out to be 85km… I started the day feeling really tired… definitely went harder than I should have yesterday so I only managed 4km before making a stop for coffee in the town centre :-)
I found most of the day really hard going, the headwind was back and the first 40km or so were gently uphill and across a pretty bleak, desert landscape.. my tired legs and head didn’t want to know… Since I joined the main highway in Malargue it’s been super quiet but today, this close to Mendoza it was busy and no fun at all. Phil and Cathy back in San Martin had told me about an alternative road that runs parallel to Ruta 40 and avoids the final 40km or so that is motorway into Mendoza. They couldn’t be specific about how to find this road as it’s not my map and wasn’t on theirs… Google Earth came to my rescue while online in San Rafael and I found it… running west of the motorway from a place called Ugarteche… 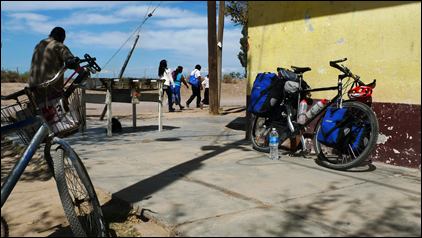 Ugarteche itself doesn’t have a sign other than one at 10km to go… and to get to it I had no choice but simply ride across all the lanes of the highway during a lull in the traffic :-) Stopped here for water and met a drunk guy playing table football with himself outside the shop… and two dogs playing with themselves in the shade underneath the football table..outside the shop.
The side road itself running north from Ugarteche was lovely, a tree shaded stretch of broken asphalt running past vineyards/bodegas, through a string of pueblos, one of which had a chaotic market in progress along the road, and all the time views of Aconcagua to the west :-) 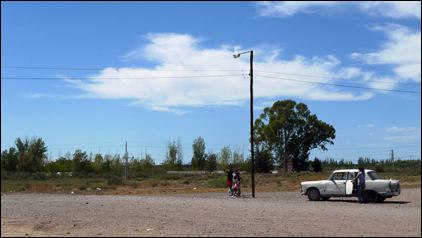 Just getting off the highway I felt 100x better, and after lunch in Lujan Cayo I was joined by a local roadie on his Scott Carbon road bike… So, the final 20km or so into town was something of a 2-up timetrial with each of us taking a turn at the front.. though with my legs feeling better I couldn’t help but unveil my true roadie colours and in the end he gave up and sat in what must have been an enormous slipstream from my laden bike as we swept into the city faster than most of the traffic at around 40-45km/hr :-) Lots of fun and we parted ways with a 40km/hr handshake as I headed into the centre of town. 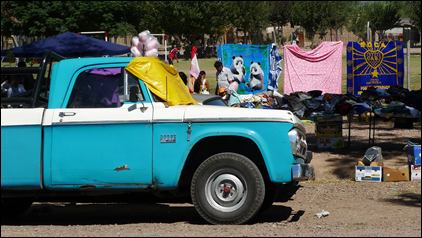 Siesta time on a Sunday was the perfect time to arrive… the streets were deserted, the seemingly endless series of red lights were a pain and in the end I rather shockingly ran most of them <ahem.. sorry>… the coppers ride bicycles here but I suspect they wouldn’t catch me even if they were bothered…
So, I arrived at my hostal at about 2pm where I hooked up with Mark, another globetrotting cyclist who got in touch last year via my blog… Very happy to be here and planning yet another piece of cow and chips for dinner tonight :-)
Mark mentioned this evening that Mark Beaumont, one of the 3 guys that broke the round the world cycling record  last year is about to arrive in Ushuaia down south in Tierra del Fuego having completed the fastest ever transit of the Americas by bike… quite an achievement I think, but he’s welcome to it. He’s had to stick to the Pan Americana which would be like touring the Uk by riding up the M5/M6.. It’s taken me a while to get to Mendoza relatively but I do prefer the ‘places in between’.. the challenge of the small dirt roads in the mountains and the interesting little pueblos. I made a brief foray away from the mountains on the highway from Malargue to San Rafael and now back to the mountains at Mendoza… it was good riding and I covered a lot of ground very fast, but not enjoyable as such and from here north I am looking forward once again to wiggling my way through the mountains… once I’ve had a rest and a few bottles of the local wine :-)