This past weekend was the annual SeaCornwall Cornish Sea kayak Rally, a weekend of camping and sea kayaking in west Cornwall.  I went along Saturday and Monday, partly to enhance further the ratio of leaders to attendees but also to enjoy some good social paddling. I couldn’t make it on the Sunday as I was guiding a group for Cornish Cliffhanger. As it happened Sunday was blessed with the best weather of the whole three days, an overcast day of light winds sandwiched between two days of heavy rain and near gale force winds… 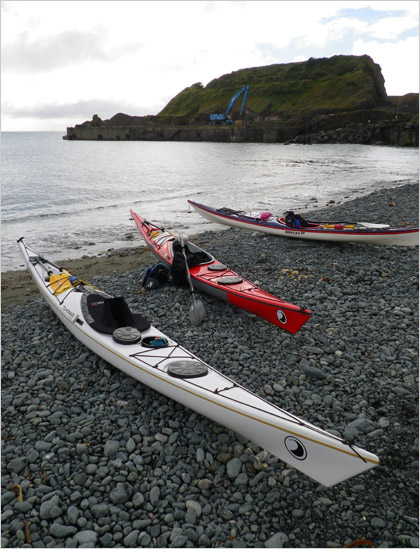 a pair of Tideraces and a Romany on the beach at Porthoustock, not as pretty by the usual standards of west Cornwall but still a very nice area and the water is as clear as the rest of Cornwall.

Saturday, to find some shelter for the group from the strong westerlies and to allow a social paddle  as a single large group (17 + leaders) we headed over to Porthoustock on the eastern side of The Lizard with a plan to head to the Helford for some exploring and a spot of lunch. It rained. A lot. But that didn’t detract from what turned out to be a really mellow day out. 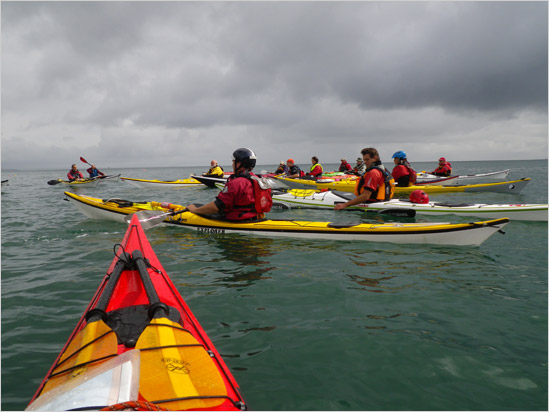 a large group of kayaks under leaden skies.. 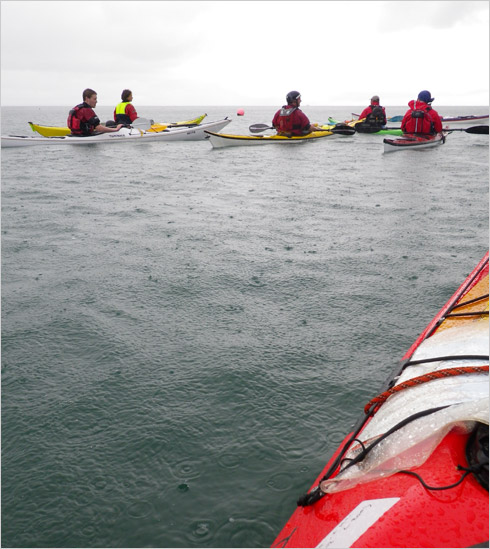 it rained.. lots, not that it makes any difference when you’re wet anyway 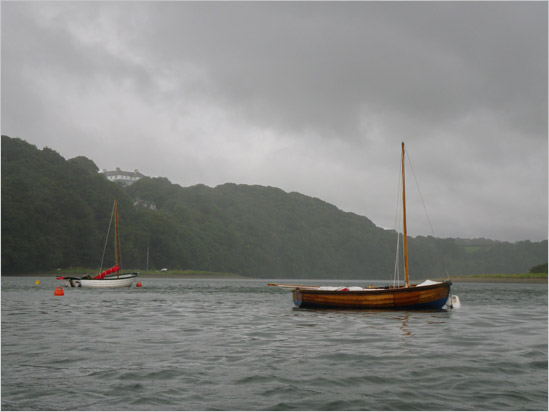 exploring the very pretty, and sheltered, Gillan Creek.. in the rain 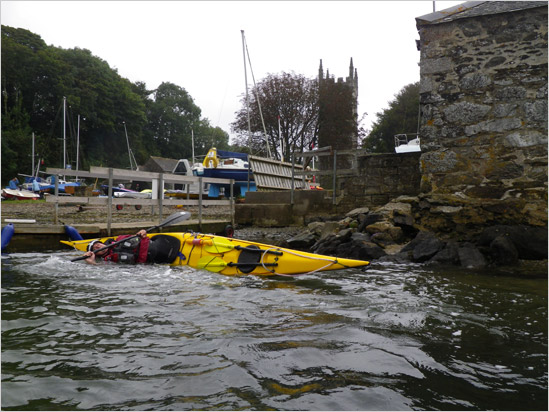 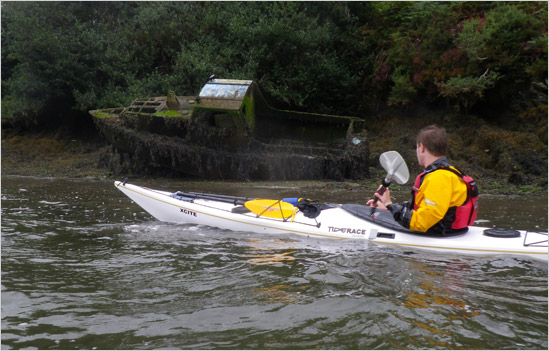 probably a bit past it for a restoration project, there are a few mouldering wrecks lining the Helford 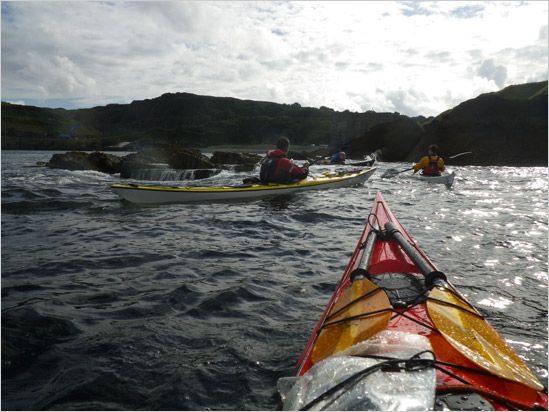 the skies did clear toward evening.. 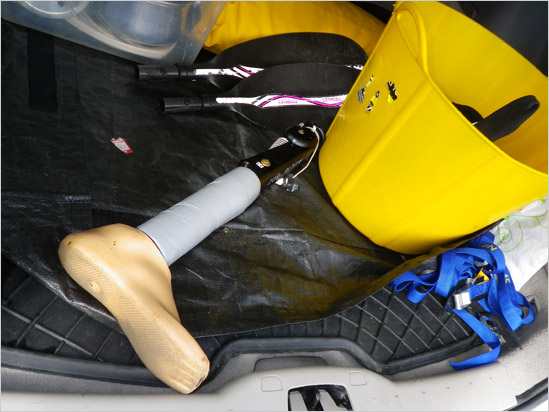 a somewhat unusual kayaking accessory.. less sophisticated than the “do everything else leg”. It belongs to a friend.

As I said I missed Sunday but it was a great day for a paddle from St Ives to Sennen along the very exposed northwest coast of Penwith… which is what they did. Monday then brought more heavy rain and a southerly gale.. well, almost a gale, a solid force 7.. quite fresh. Southerlies are great fun.. they whip the shallow Mounts Bay up into a great big expanse of froth and surf piling up over the offshore reefs. Fantastic fun in a sea kayak so with the weather not really being suitable for anything else the weekend finished with a flourish of play in the strengthening wind and building surf of the bay. When it’s onshore like that I prefer playing in my sea kayak to my surf kayak, my stumpy little surf boat is pretty useless in onshore whitewater as opposed to proper clean Atlantic swells. I tried to take some pics on the water but without a head mounted camera it’s impossible to capture the best of the silliness. Oh well.. these will have to do. 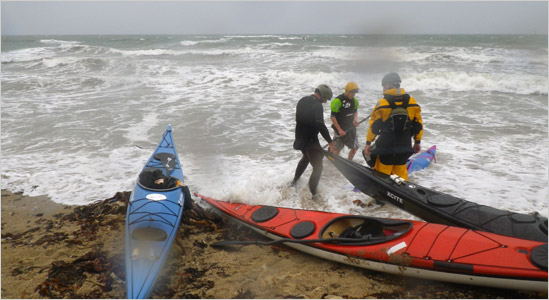 quite rough, very fun.. high quality kayak parking in evidence too..  In the distance of this pic, if your eyesight is good.. (sorry for the rain on the lens)… 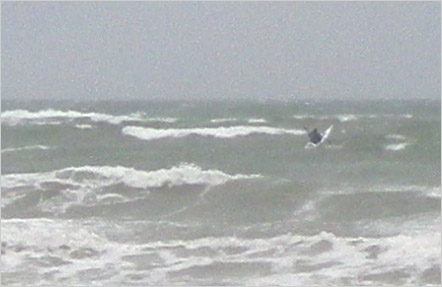 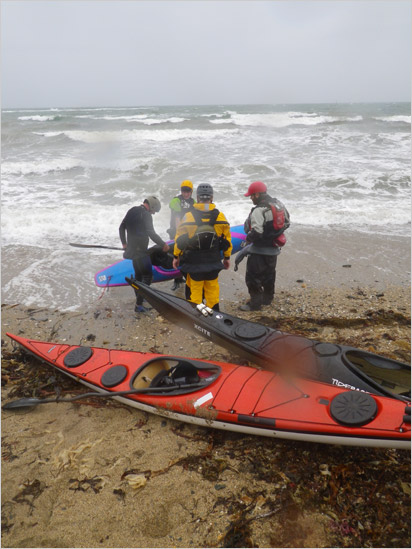 Jim, a regular surf buddy, did bring his Bullitt, a long enough IC class boat to work reasonably well in these messy waves. Not sure about that colour scheme though.. glitter pink and blue.. hmm ;-) 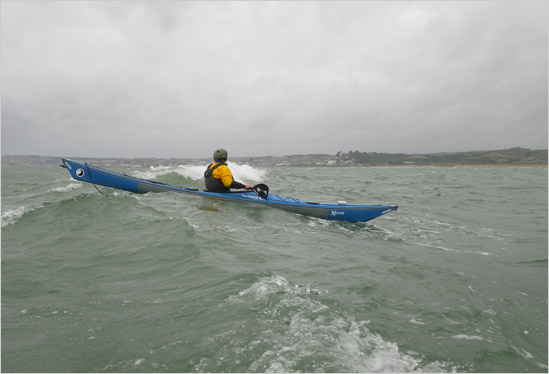 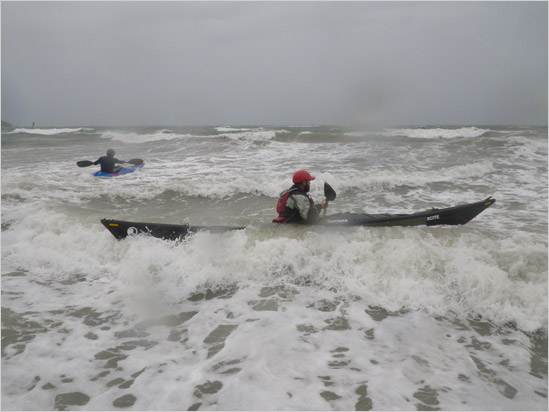 .. but conditions improved (in the fun sense..) as the tide increased the depth of water and the wind increased

Anyway, the Sea Rally runs every August Bank Holiday and is always a really god fun social paddling weekend.. if you fancy it next year stay tuned to Sea Cornwall for details.