Last Sunday I piled into a van with a couple of other friends for the long drive north to Anglesey for a spot of Welsh paddling… the idea being to enjoy the various tidal races that Anglesey is best known for in the paddling world. There are some good races down here in Cornwall but the main feature of Cornish paddling tends to be big Atlantic swells and surf. Anglesey gets much less swell but is blessed with an awful lot of tide with flows easily reaching 7 knots in spots such as Penrhyn Mawr (by comparison the rates on springs around Lands End/Longships ‘only’ reach 4.2kts). In the right conditions it makes for some fantastic play and for a Cornish paddler an opportunity to practice handling a boat in conditions that just don’t exist down here in the far west. It turned out to be a terrific few days away that began with a cheeky late-night wild camp under the watchful eye of the South Stack lighthouse. Pitching my tent at 11pm thanks to a minor planning failure on our behalf.. well, not really a planning failure, more of a ‘no plan’ flavour of event. The plan, insofar as it existed, was to try and get to all the major races around Holyhead Island.. Rhoscolyn, North Stack, South Stack and Penrhyn Mawr. As it happened conditions didn’t always play ball… being either too on or very off… at times an absence of wind and swell, at times too much and at times.. fog. Still, some quality play was found that very much whetted the appetite for a return as soon as possible. I really didn’t do much with a camera at all, all I really have to show for my attempts at some rougher water pictures are some teeth marks on the camera casing.. so you’ll just have to make do with a few less exciting snaps instead.. 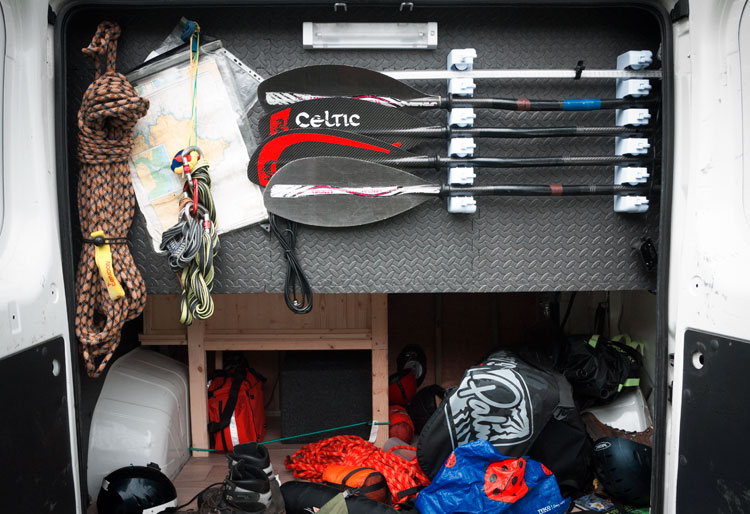 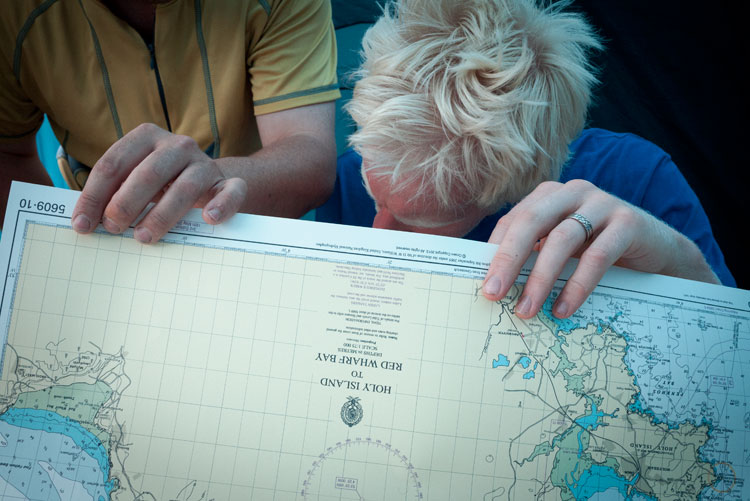 planning… ‘I can’t seem to find the pub…’

While up there I also took a Nigel Dennis Pilgrim Expedition for a spin.. purely by chance really – the result of  a casual visit to the Nigel Dennis/Sea Kayak UK factory to say hello on a cold, damp morning. I’d paddled one before and liked it but only on flat water. The boat was there and available, the ocean was in quite a lively state for a bit of play with plenty of movement and fresh winds.. perfect conditions for trying out a boat, and I was just interested to see what it was like. To cut a short story very short I really, really liked it and so not being the impulsive sort at all sold my Tiderace to one of the guys over beers that evening and helped myself to a factory fresh Pilgrim that could be finished in time for me to bring back to Cornwall. Ideal. The Pilgrim is a lovely boat for the skinnier.. no, wait, ‘more athletic’ paddler such as myself. I very much feel as if I’m wearing the kayak than sitting in it. It is a beautifully slender thing with a beam of just 19.6″ (skinnier even than my Tahe Greenland) with a small cockpit closer to that on my surf boat in scale than a sea kayak, and being only a little longer than a Romany makes a fantastically playful boat, yet still with plenty of room for camping gear etc, that handles effortlessly and with absolute precision.. and is also very quick. Particularly attractive is that its roll stability appears to be completely neutral.. it doesn’t ‘harden up’ as more and more edge is put on, which aside from making it wonderful in rough water, also means that, combined with the narrow beam and low rear deck, it is a very very nice rolling boat (my Greenland is now redundant and also going up for sale). But more on that in another post else I’ll have nothing to write about :-) The guys at the factory were great, it was a real pleasure to be able to take the boat – they bent over backwards to get it finished for me in time and also really good to see the care and attention that goes into the kayaks. Unlike certain other kayak manufacturers I have experience of they do have a very detailed quality inspection process and nothing is permitted to leave the factory unless it is perfect. A real pleasure to have a boat from them. Stay tuned for some pics. 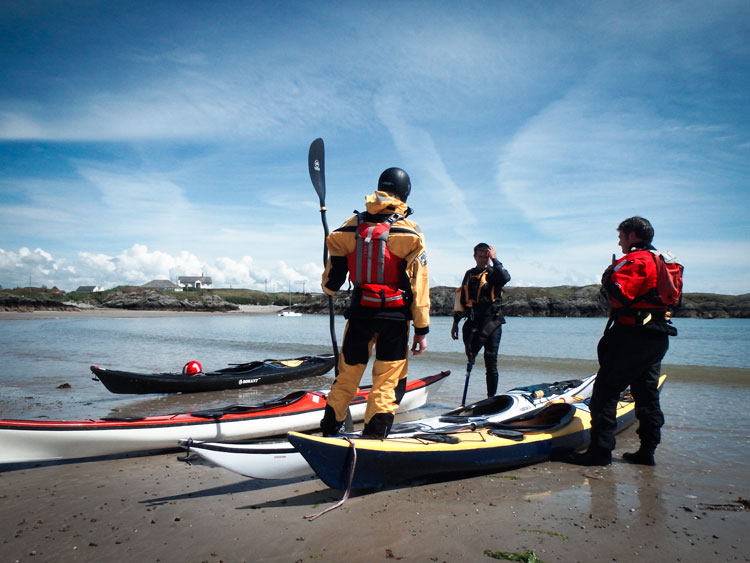 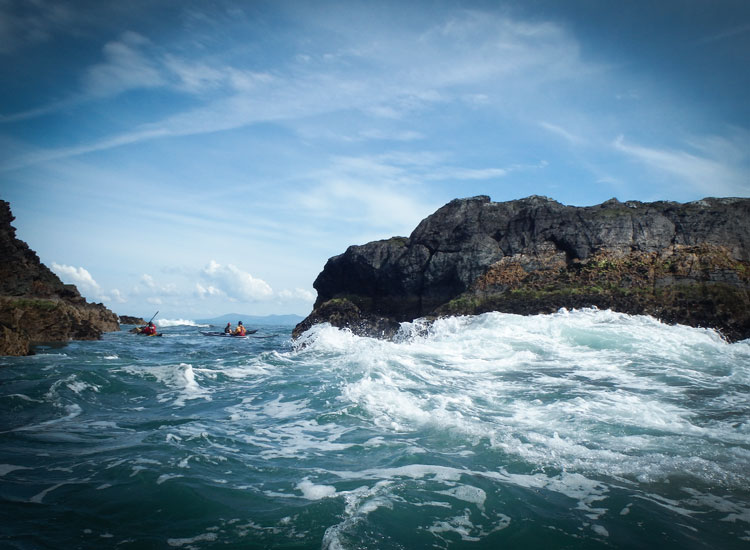 having a rest in a spot of shelter…. 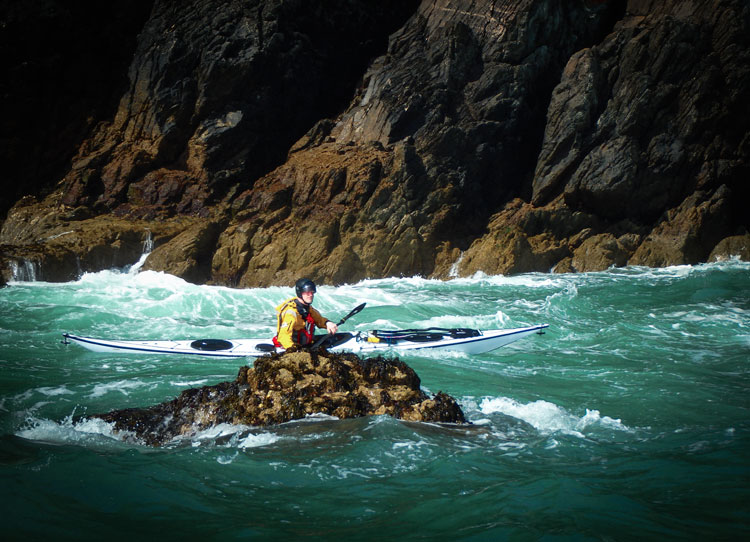 some lovely colour in the ocean 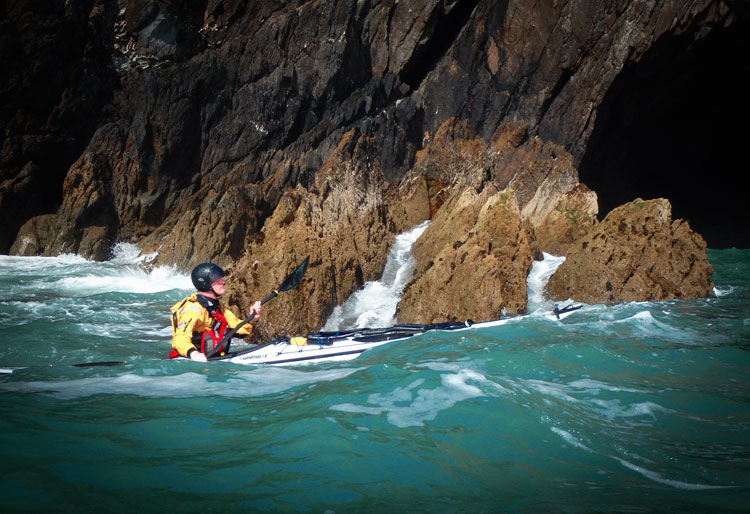 and again… it’s a lovely bit of coastline, quite different to the granite of west Cornwall but still with plenty of ‘epic’.. 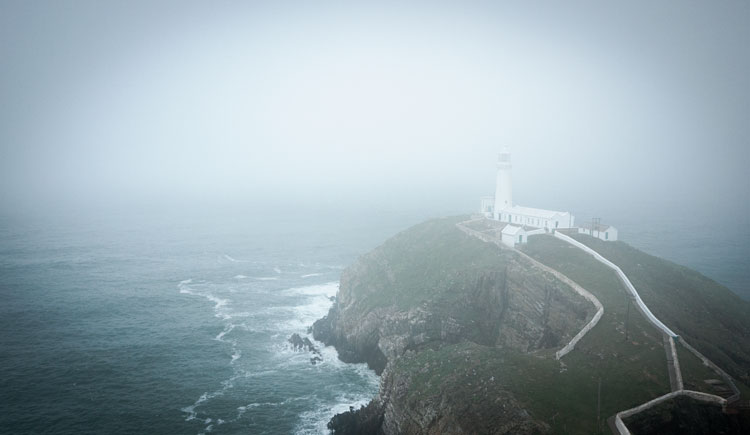 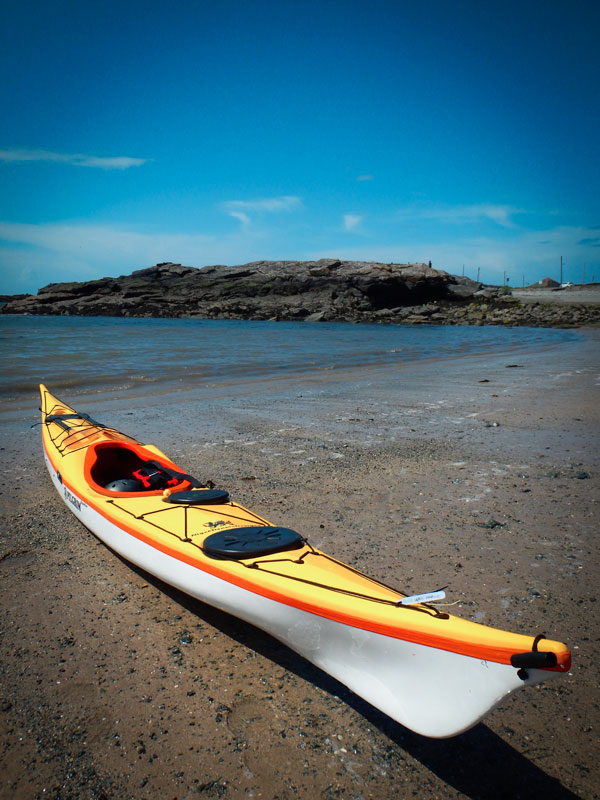 that demo Pilgrim Expedition. Mine is red… the only possible choice being the fastest colour there is… paddling buddies will be seeing a lot of it from behind.. or rather not a lot being a dot on the horizon or something.. hurrah!

2 thoughts on “a spot of Anglesey”