Thursday last week, along with a few good friends from the Penzance Canoe Club (a happy club sea paddlers get together sort of a thing) I hopped onto the overnight ferry from Plymouth to Roscoff for a few days sea kayaking of  a Breton flavour. The idea being to paddle out of the port, find a good spot to camp and enjoy a few days exploring the local coastline. With high winds in the forecast we chose to pitch our tents in the dunes below the lighthouse on the Île de Batz just a few km from Roscoff.. just in case things stayed windy and Monday’s paddle back to meet the afternoon ferry turned into a slog. The winds were strong too on Saturday especially… around F7 being good for not much more than a bit of play in the rough.. or a wander along the island’s rugged coastline followed by a few beers in the french sunshine. Being lazy we chose the latter… With some heavy rain in the mix too the weather was a great test for the new sub-kilo tent I picked up last week that is coming with my on my next bike journey in the autumn…  Friend Rich Uren of seacornwall.com took care of the organisational stuff for the weekend which was ace, I didn’t have to lift a finger other than to remember my beer money… Rich knows the area well and also has handy supplemental skills like knowing the right person to call at Brittany Ferries for when you want to do something odd like park a sea kayak on the car deck :-)

I had my well-worn (and corroded..) old GF1 and 28mm lens on board so here are a few snaps… 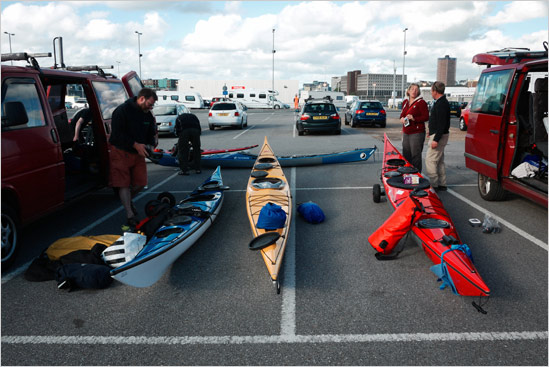 Loading kayaks in the parking lot at Plymouth ferry terminal.. we left vans there and wheeled the kayaks on board.. much cheaper and far more fun than taking a vehicle across. 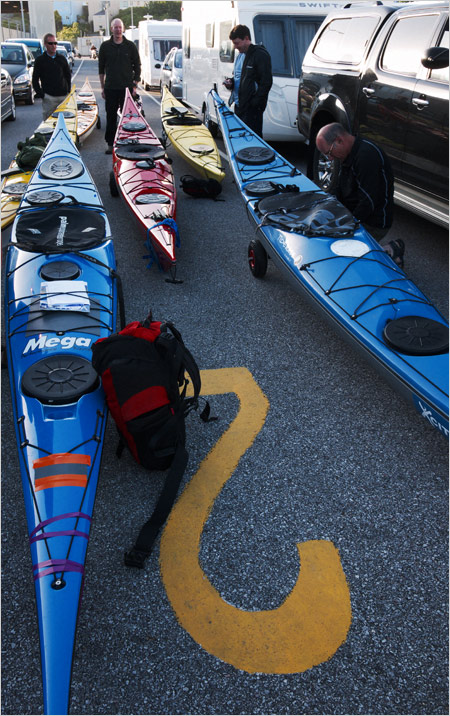 the ‘kayaks only’ lane waiting to board. Cue smug, self-righteous feelings as we were given priority over the cars, much to the consternation of one or two impatient, constipated old duffers :-) 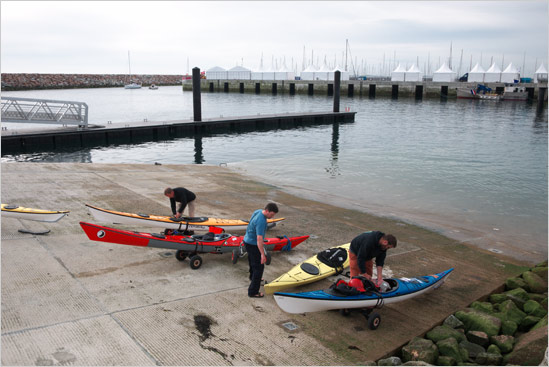 There is a spanking new marina next to the ferry terminal in Roscoff… ideal for launching a sea kayak.. until a port official comes along and insists “eet eez not allowed”.. later found out there is some by-law that says if you haven’t got an engine or sails then sea kayaking in the area is strictly “interdit”… thus necessitating unpacking and reassembling trolleys for a 1km trudge around the headland to the beach… 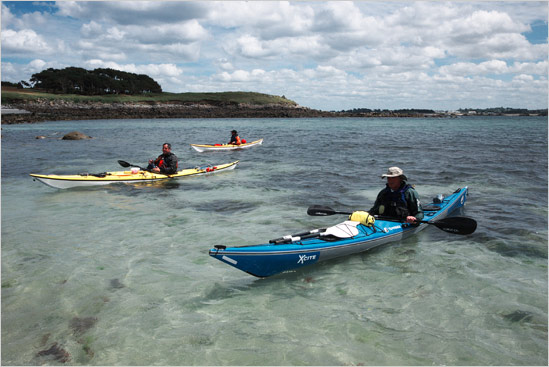 Despite that we were on the water by 10.30am for a day of exploring the local archipelago before landing on the Île de Batz. 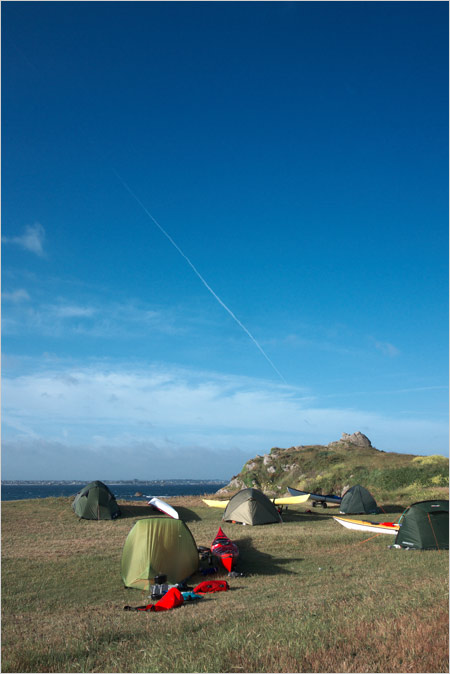 A terrific spot to camp in the shadow of the lighthouse.. albeit very exposed to the strong west-southwest winds. 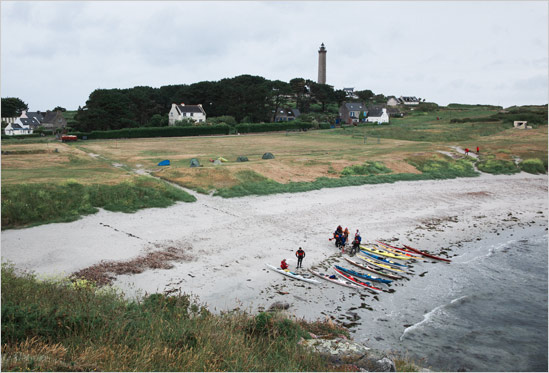 here’s a snap of the camping spot ‘in context’.. a group of French paddlers on their way down the Brittany coast showed up Sunday morning which was cool. 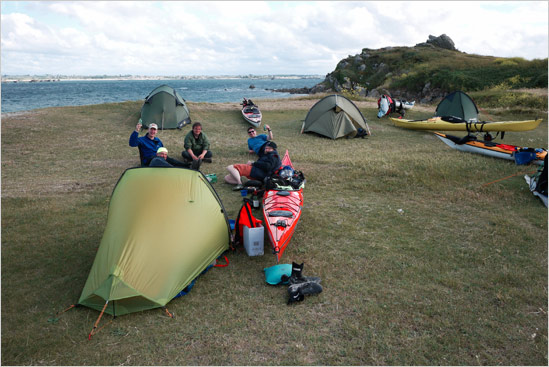 oh.. here’s another ‘camp spot in context’ snap.. this one having an ‘afternoon beers flavour of context’… That’s my new tent in the foreground, more words on it in a minute. 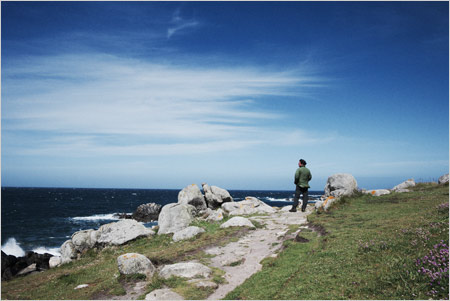 a windy day hike around the coast. The island is something like 10km by 4km with a beautifully rugged coast.. an awful lot like Cornwall, somewhat unsurprisingly perhaps. 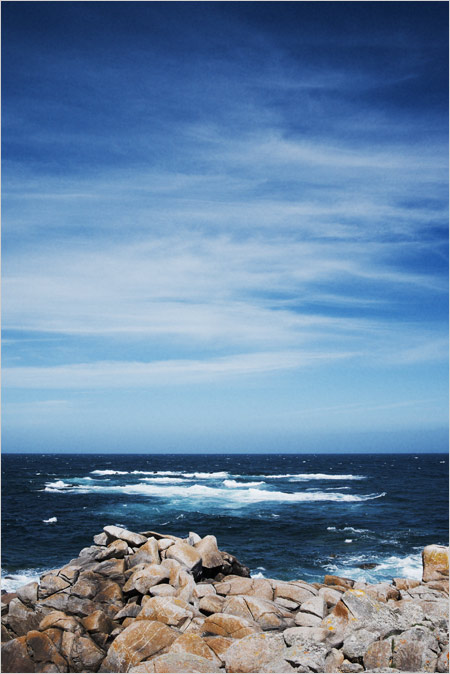 lots of reefs in the area make it a difficult place for the yachtsman but great fun for the sea kayaker. 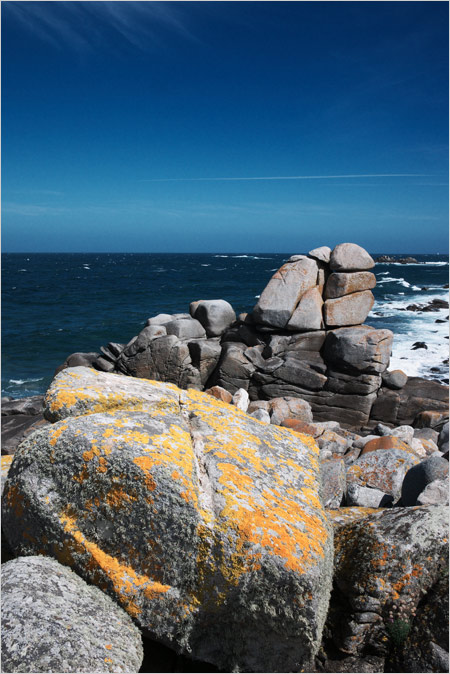 mmm… granite. Very much like Cornwall, just without the cliffs. 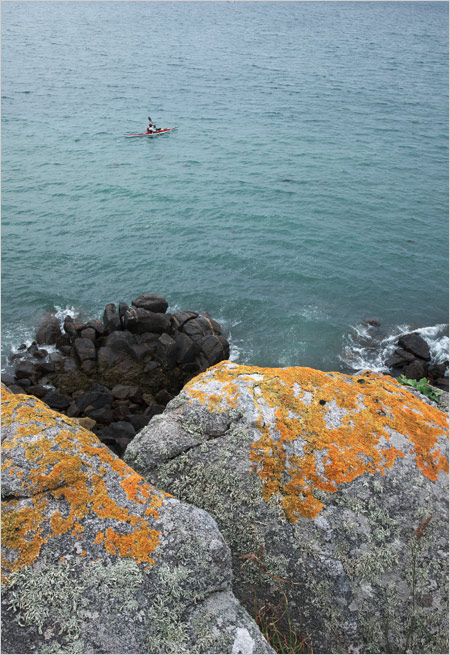 heading out for another day on the water 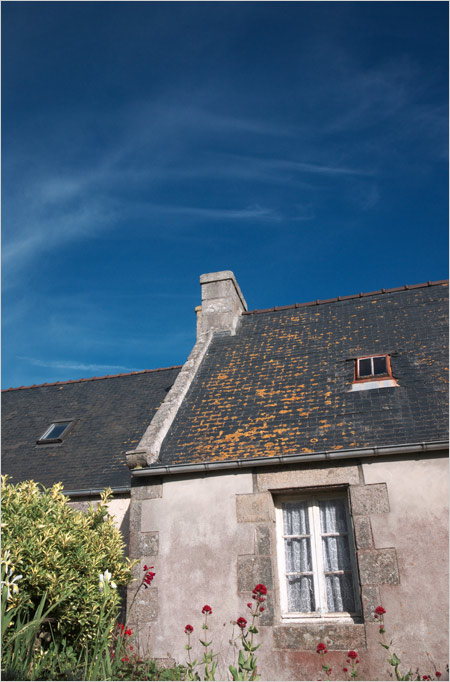 the village is exactly as you would expect a small, French village to be… 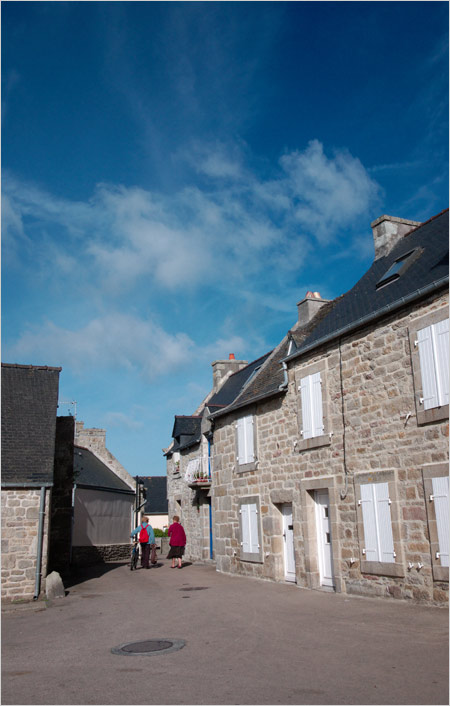 quite lovely.. if you like quiet, French villages that is. 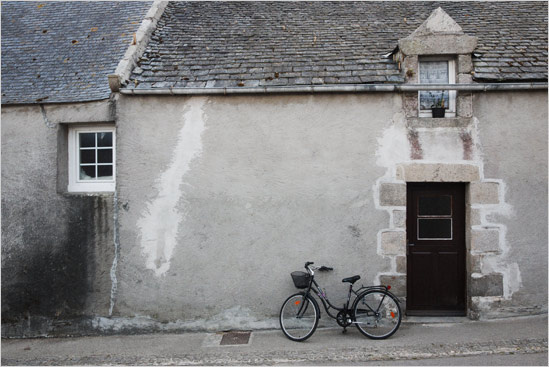 .. with very little motorised traffic.. In the main transportation appears limited to bicycles or tractors.. Ideal. 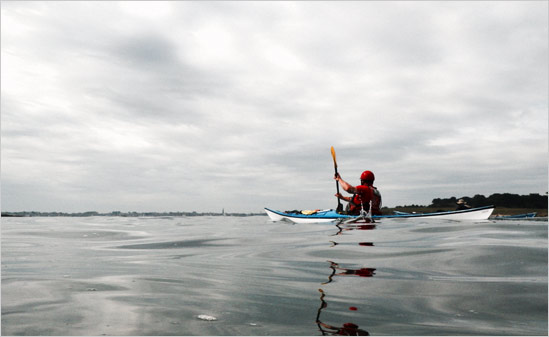 when the wind did drop it dropped all the way.. the ocean glassing right off in the oily way it often does before the arrival of the next weather front.. 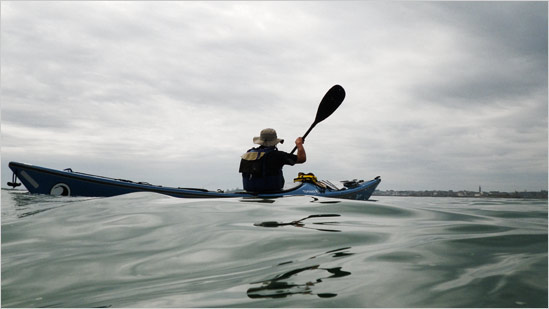 ..making for some very mellow paddling. 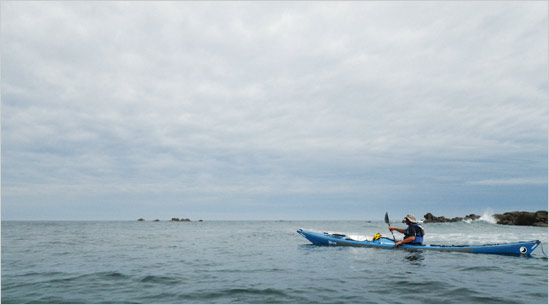 I expect I’ll be back in the area before too long. It’s been years since I visited Brittany… it’s too easy to forget just how close it is… and the scope for travelling by sea kayak is fantastic. 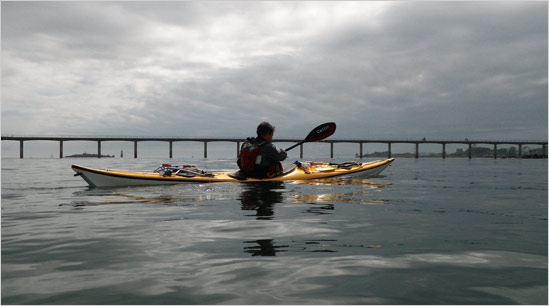 Heading back into Roscoff on Monday in time to catch the afternoon ferry departure to Blighty.. 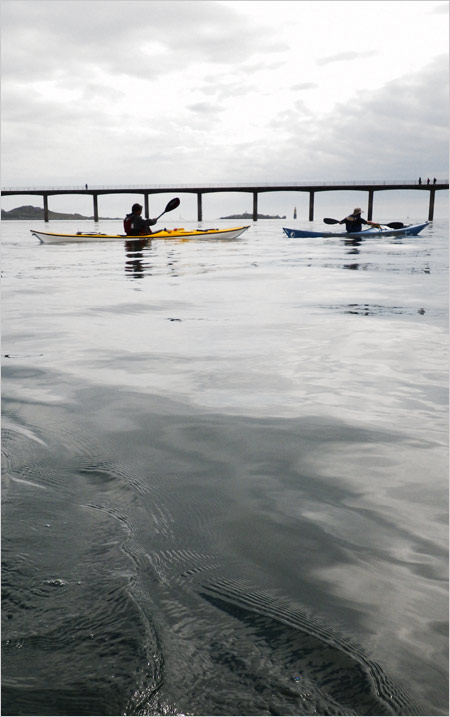 Oily calm. The rain, and wind, arrived soon after.. while waiting in the queue to board the ferry in fact :-)

Great fun. Anyway.. the tent, yeh it’s a Force Ten (Vango) Helium 100 Carbon. It’s the ultralight version of the original Helium 100 I used on a long trip a couple of years ago.. Aside from carbon poles and some crazy light new fabrics there have been some notable improvements.. the ventilation is much better so doesn’t suffer so badly from condensation and it’s generally easier to keep the temperatures inside more comfortable on warmer nights. To date I’ve been generally suspicious of silly-light tents so I was interested to see how this got on in some proper weather.. it was brilliant, over a couple of nights of rain and high winds not a drop got in and I spent very comfortable nights. I still wouldn’t take it to Patagonia should I head back there again, it really isn’t up to that kind of weather, but for most other stuff it should be absolutely fine.. provided you can find somewhere to get the pegs in, or some rocks and branches and stuff to anchor it with as it’s not a free standing design. speaking of pegs.. the titanium pegs provided are idiotic.. best keep those for toasting your marshmallows on and buy some decent pegs with their attendant negligible weight penalty. Other than that minor point I’m very happy with it. Don’t pay the £400 retail price either, buy from my friends at Outback Trading (click here) for an awful lot less and say I sent you ;-)

p.s it just occurred to me that I should probably say that I have no relationship with Force Ten, or Outback Trading – other than that they are my friends, and that I did buy the tent.. you know, with my own hard-earned :-)

4 thoughts on “a sea kayaking weekend of a French flavour”