The ride to Assos was a good one… at last, the preceeding couple of days of riding had been pretty rubbish really with no option other than the highway west to get clear of all the industrial crap around the sea of Marmara so to be on properly small, quiet roads was great. Sadly, looking at the map there is no choice but to keep returning to the main road from time to time… but more of that in a mo… 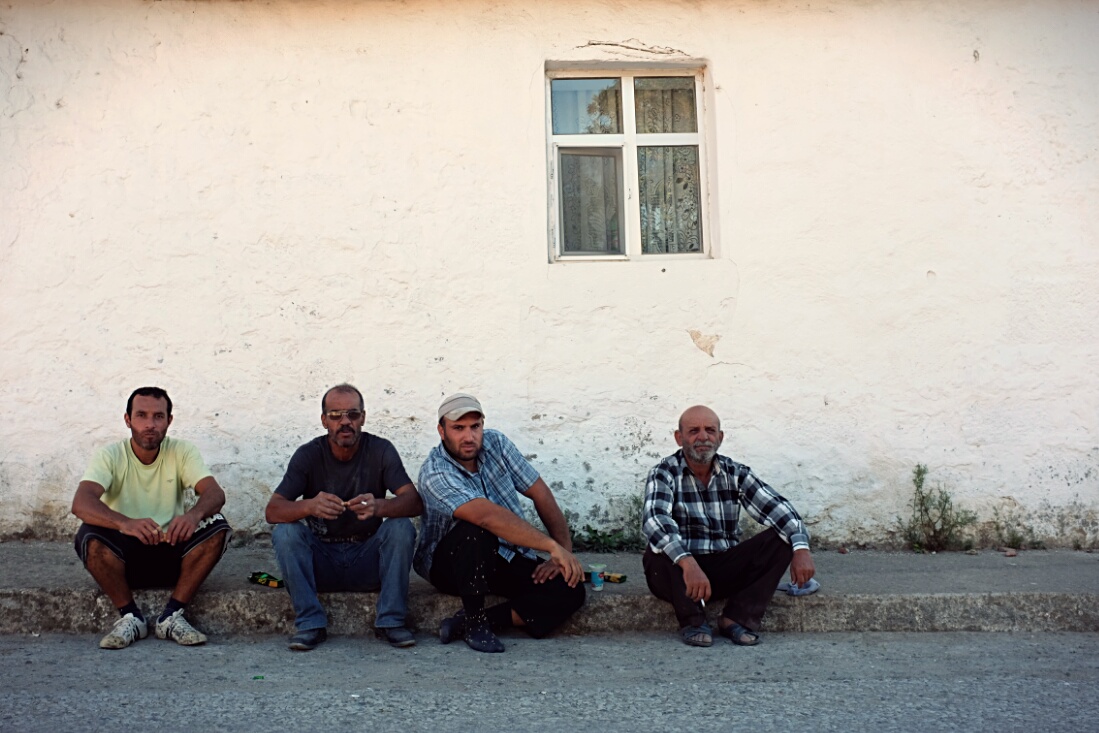 I did enjoy my day off in Tevfikiye, it’s been a long time since I had a day of absolutely bugger all, since last bike trip in fact :-) Sum total of activity for the day was putting some air into my rear tyre and bumping into a chap I drank tea with on the highway between Canakkale and Tevfikiye… so we drank more tea, following which some local farmers gave me a large bag of enormous, ripe tomatoes. Just the thing for carrying on a bicycle…. I can’t wait to seee what I’m given next to take with me.. perhaps a lemon tree, that would be good.. or a cow even…  Oh, and I ate the melon whilst sat in the late afternoon sun. 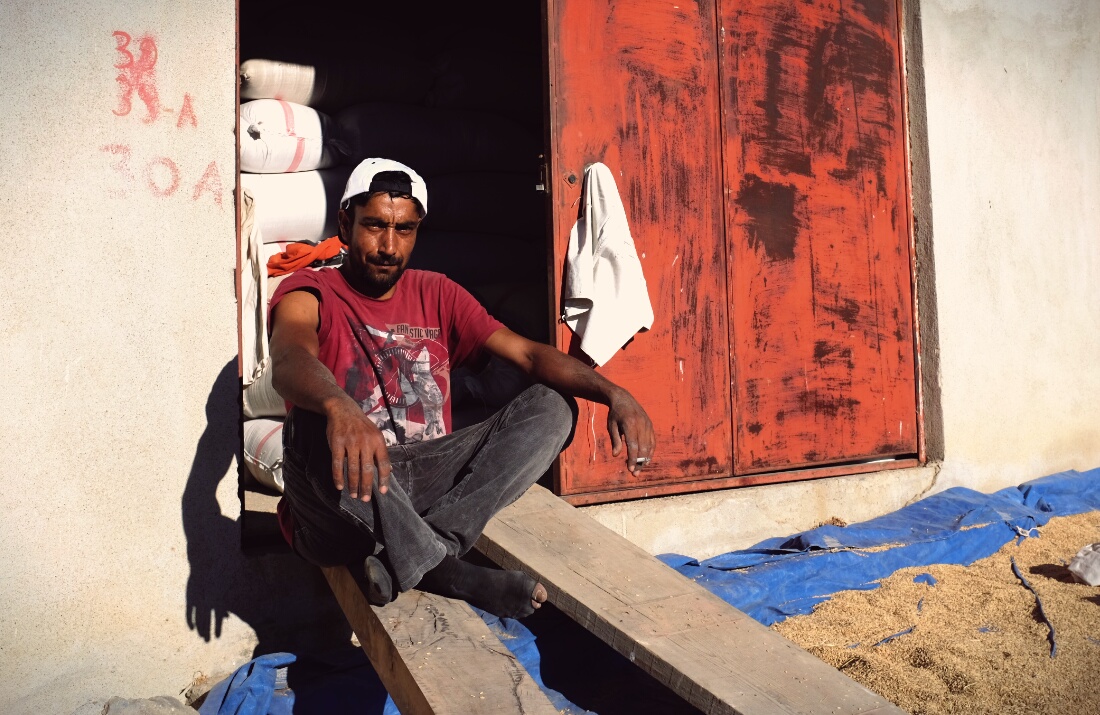 Heading away from Tevfikiye then the road was a quiet one, rolling it’s way mostly along the coast, through olive groves and a couple of shabby, and deathly quiet beach resorts, for about 60km before things became distinctly more mountainous, and hence more enjoyable, for the final 50km or so, with some long, steep climbs, cobbled in places, to deal with in the afternoon heat. With plenty of quiet, small villages along the way I took my time over the 110km, stopping for tea on a regular basis :-) The surfaces, although paved, were what you’d probably call ‘pretty bloody awful’ so the Surly, set up as it is with relatively fat 42c rubber was perfect, floating over the worst of it but still with almost road bike cruise capability. 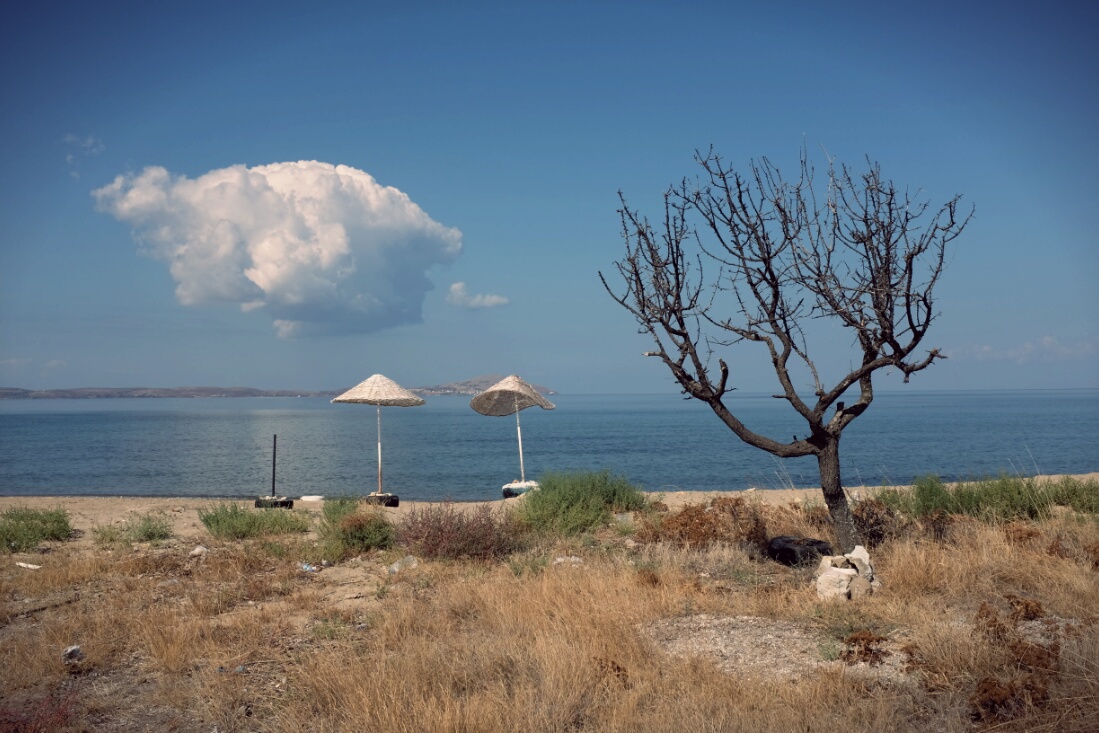 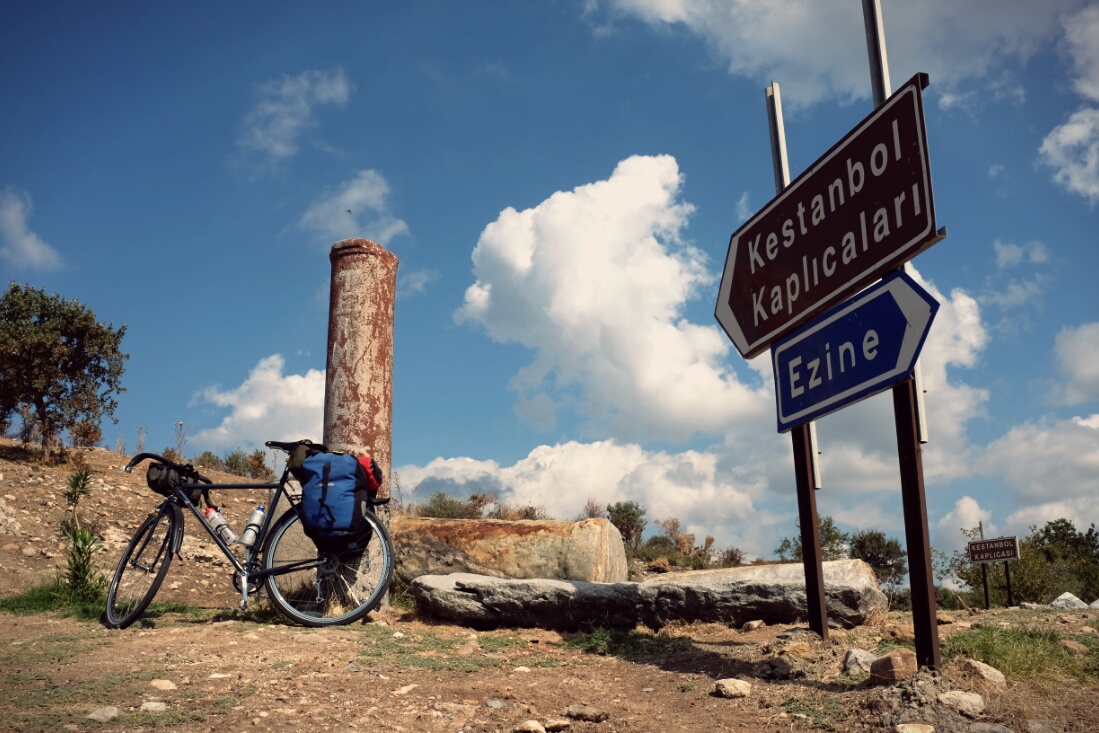 when the riding is good it’s very good, enhanced by the fact that there is ‘ancient stuff’ everywhere, just lying around under the olive trees.. 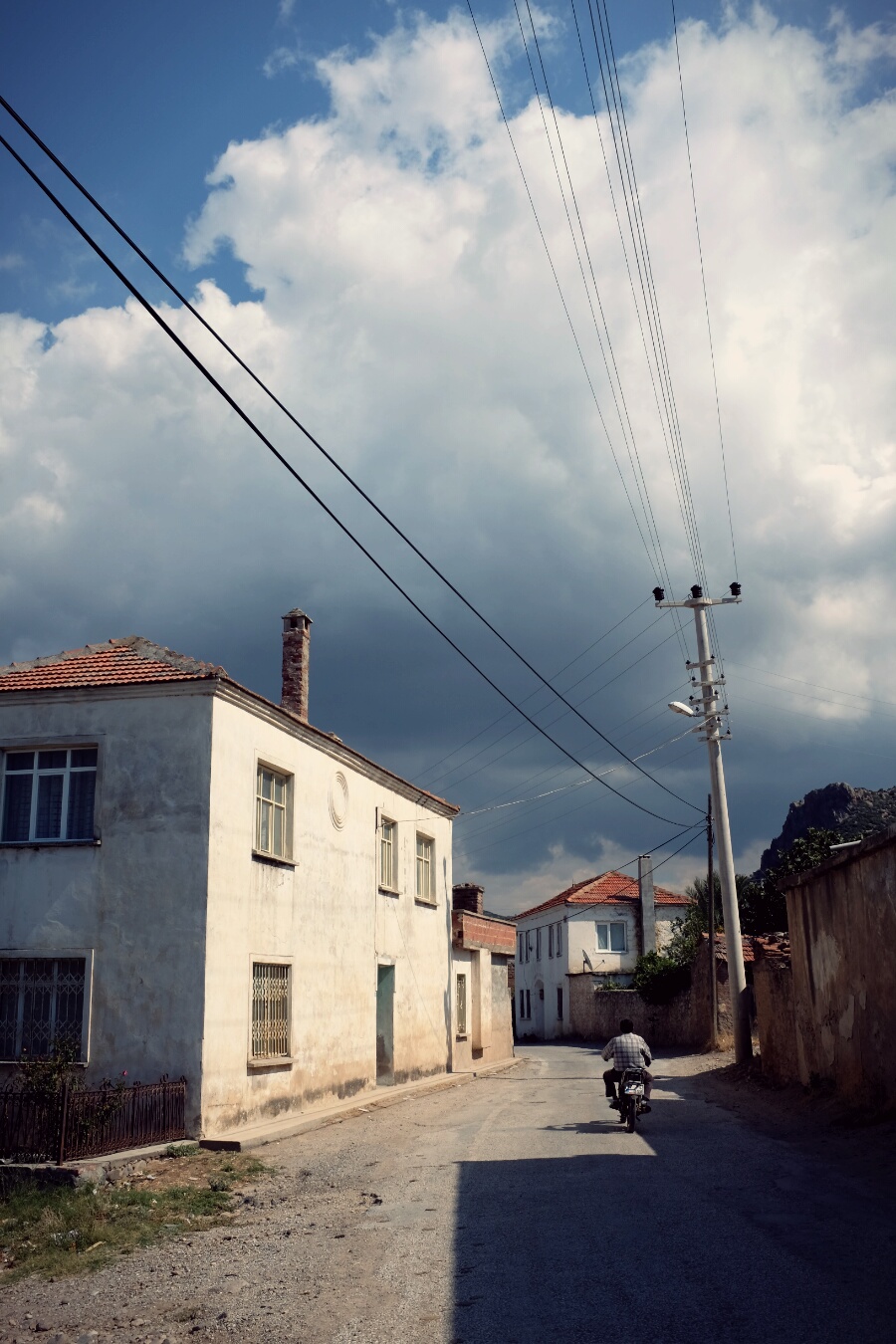 some really pretty little villages tucked amongst the hills 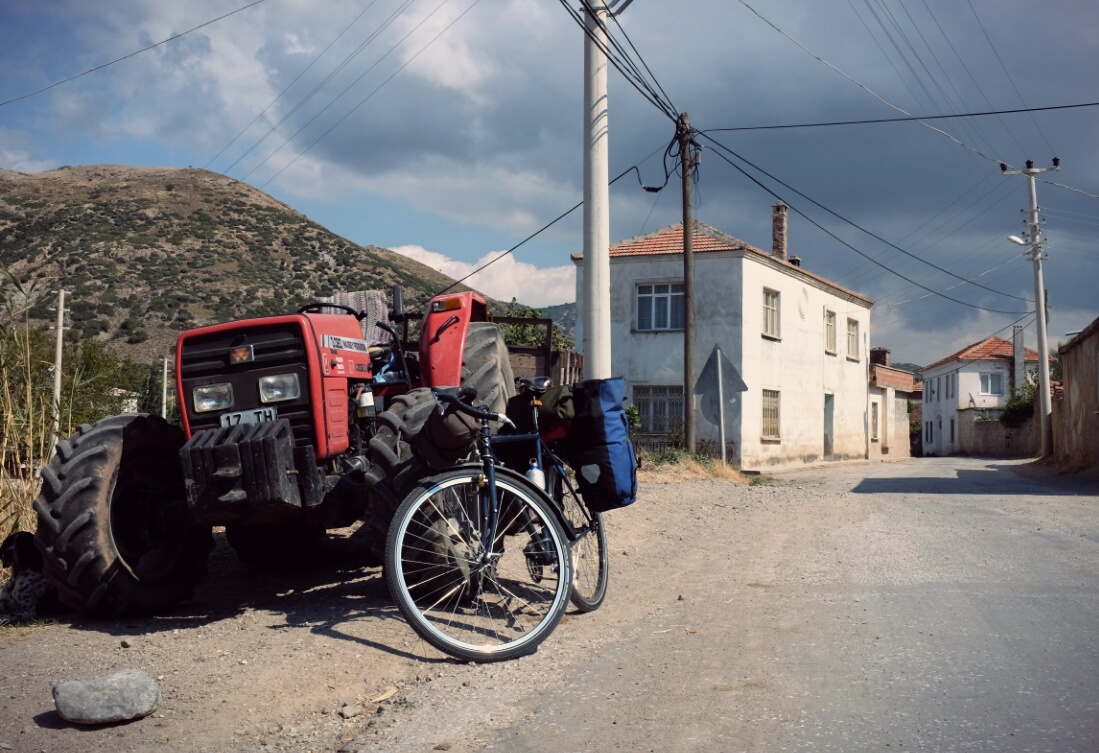 Australia is powered by the Toyota Landcruiser, SE Asia by the 50cc motorbike, and Turkey by the well-worn tractor. They are everywhere. 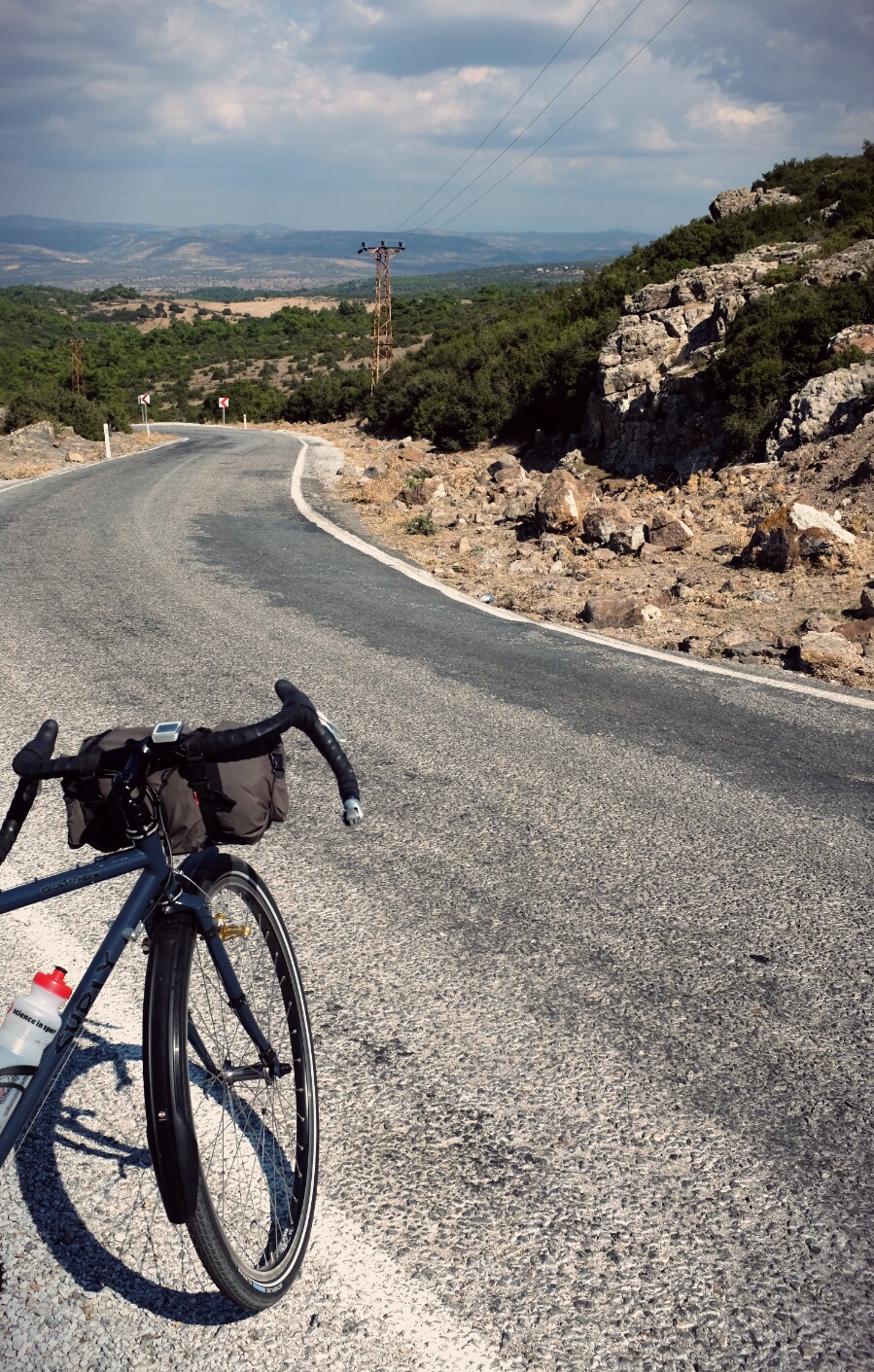 many km of stiff climbing to the tune of bells around the necks of the goats grazing amongst the fragrant pines. bloody hot… 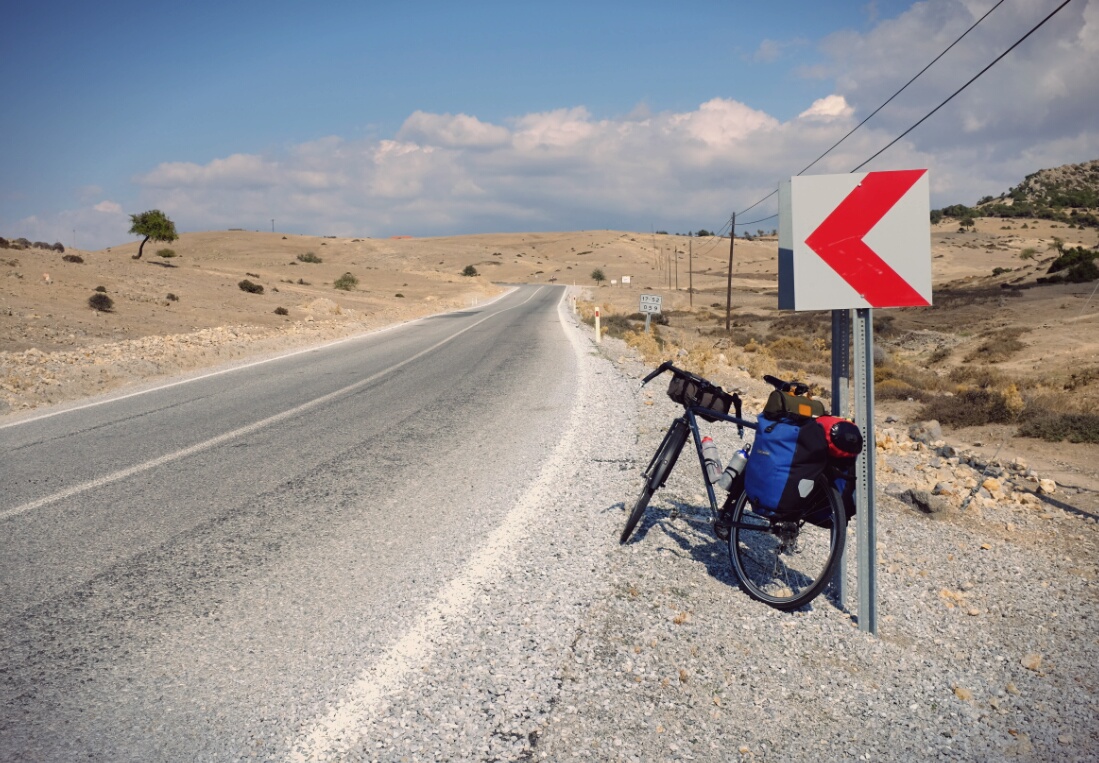 ..and in places rather bleak, in a good way.

Dropping into Assos was great, a vertiginous switch-backed, roughly cobbled, somewhat technical descent of a couple of km that plunged down a cliff face with gradients up to around 20%, and all the time with booming views across the Aegean to the mountains of the nearby Greek island of Lesvos. All the while descending I could not help but think ‘this is gonna hurt climbing back out with cold legs on a loaded bike…’. 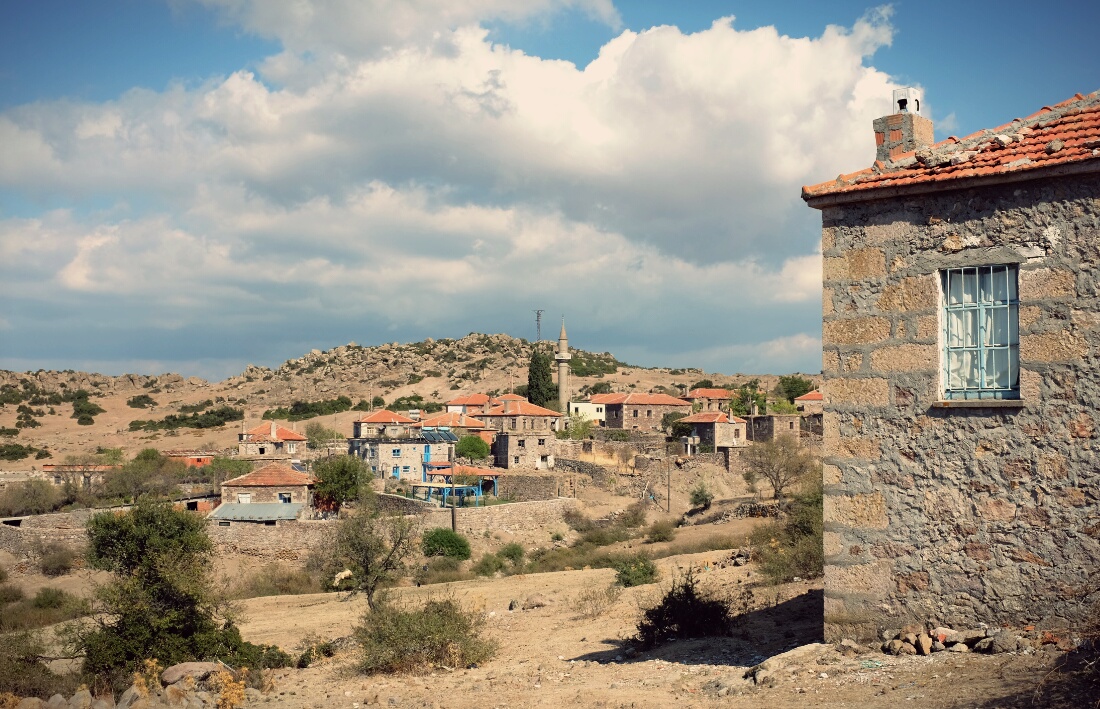 the village of… something or other (couldn’t see it on my map..) about 20km from Assos

Assos itself is lovely, a tiny harbour, a few pensions, a pebbly beach and bugger all else. Above, high on the hill is its sister village of Behramkale with a maze of cobbled streets and a bunch of ancient ruins on the very top of the mountain. I expended a litre of sweat this morning riding back up the cliff (unloaded) to go and explore.. and drink tea of course. 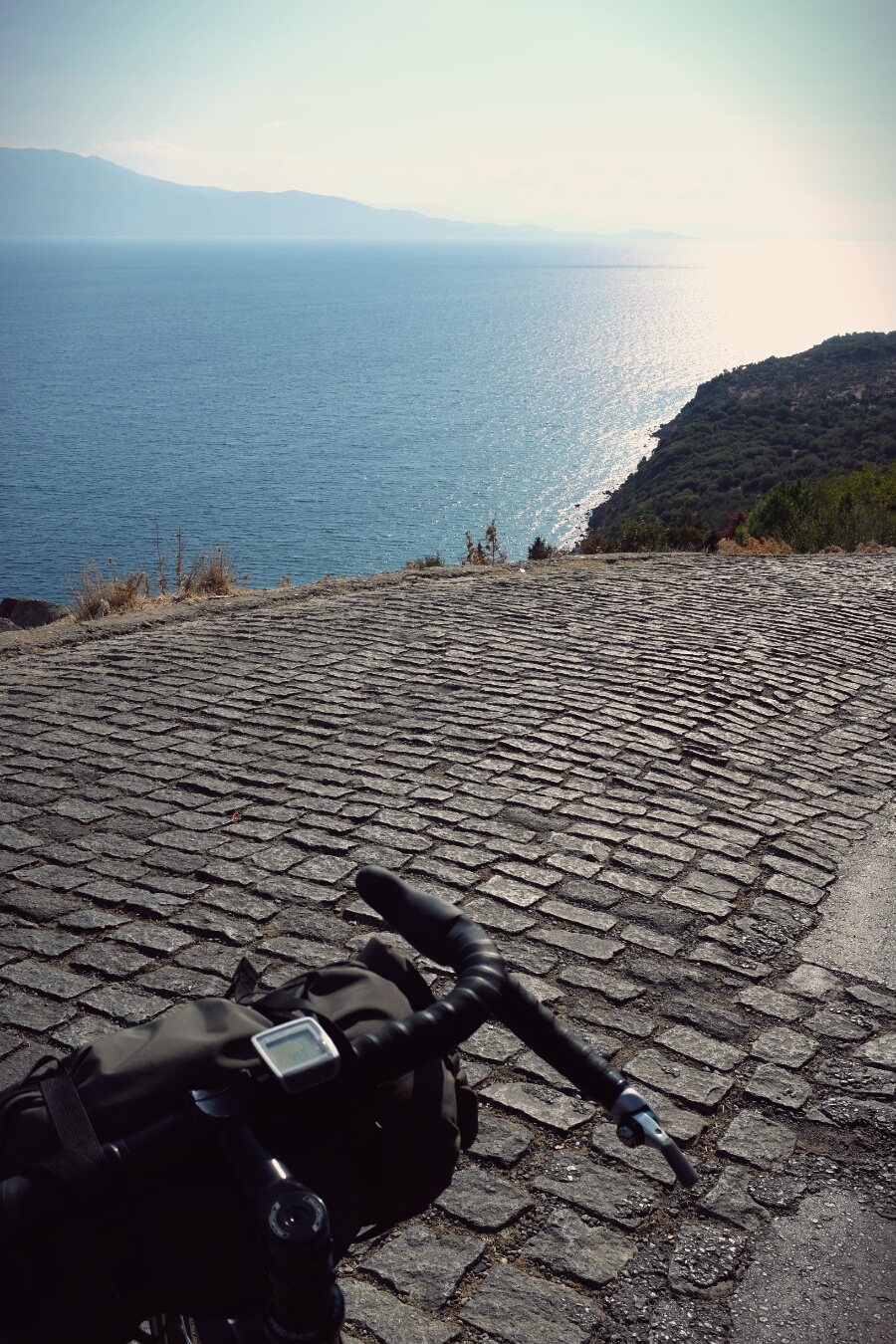 the start of the descent into Assos… Lesvos on the horizon

My arrival in Assos coincided with the arrival of a German couple on bicycles.. so that was terrific… we drank beer, laughed like idiots and compared notes on cycle touring in Turkey so far… they were also pretty experienced having spent a year riding all over Asia, China etc.. We all agreed that we can’t decide… Turkey, so far with large distances and lots of empty space, sits in that awkward spot between expedition cycling and holiday cycling. It lacks the “cor bloody ‘ell look where I am” factor of say riding in the Himalaya or the Bolivian altiplano, but also lacks the intimacy and frequency of lovely riding and destinations that, say, bless Crete, Italy, Slovenia, Croatia etc. They have 7 weeks, I have 4, we both think that’s not enough to get the best out of even part of Turkey. Ideally a few months to explore the Black Sea coast, eastern Anatolia and looping back along the southern coast, or continuing into Iran, are required. So I will have to come back, and anyway I would always have wondered what this corner was like. There’s still loads of good stuff to come but I’m not anticipating an excess of lovely, holiday flavoured riding… but I could be wrong and the only way to know these things is suck it and see. For now though… siesta, followed by a swim, followed by a waterside beer as the sun sets over Lesvos. Could be worse :-) 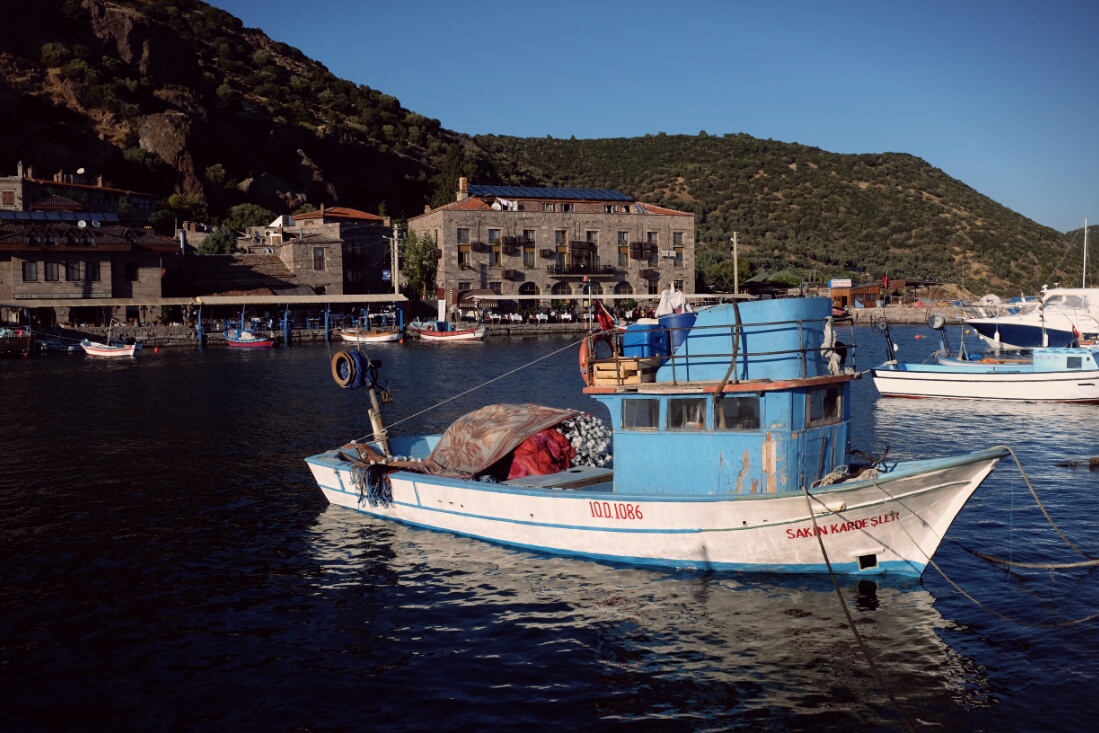 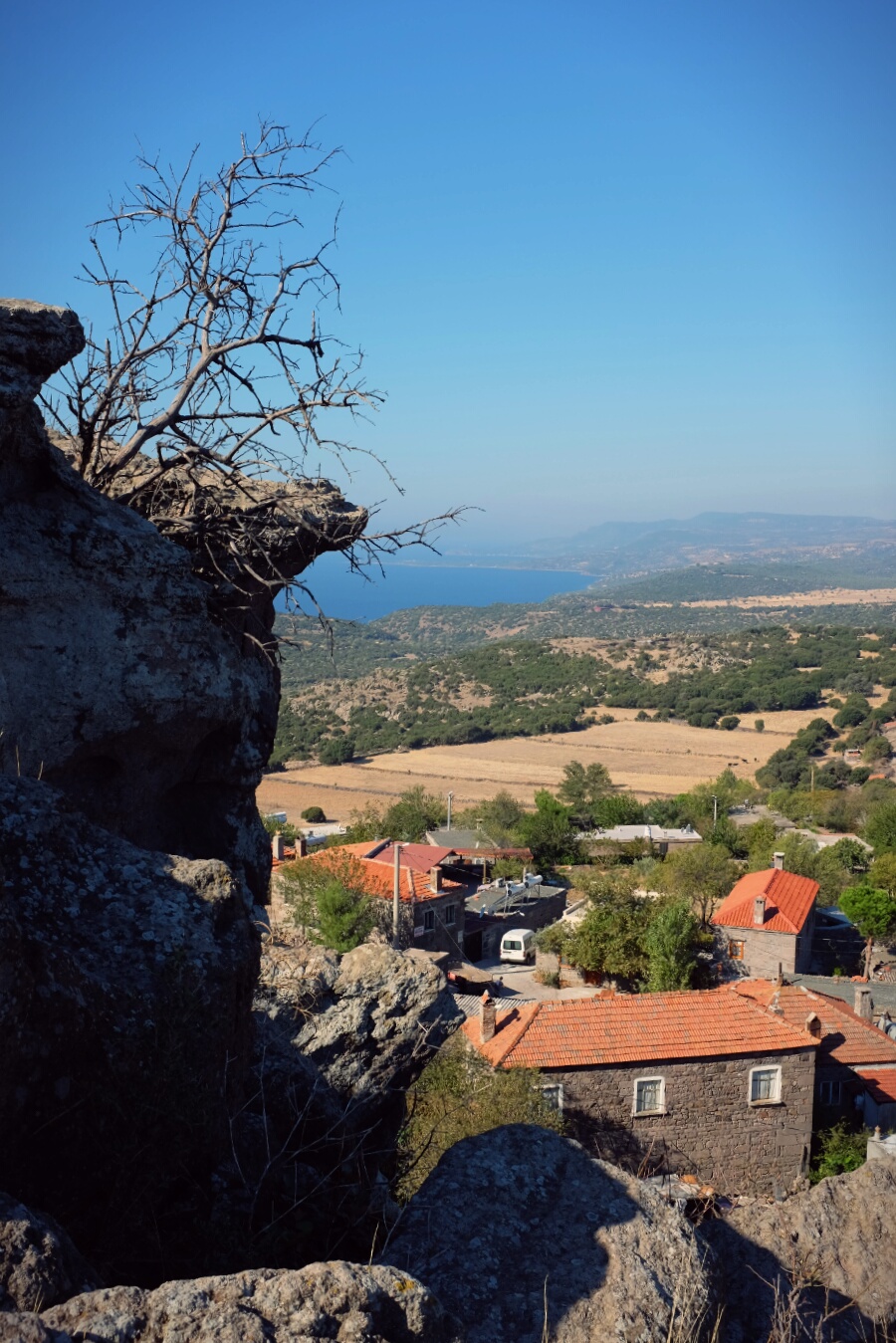 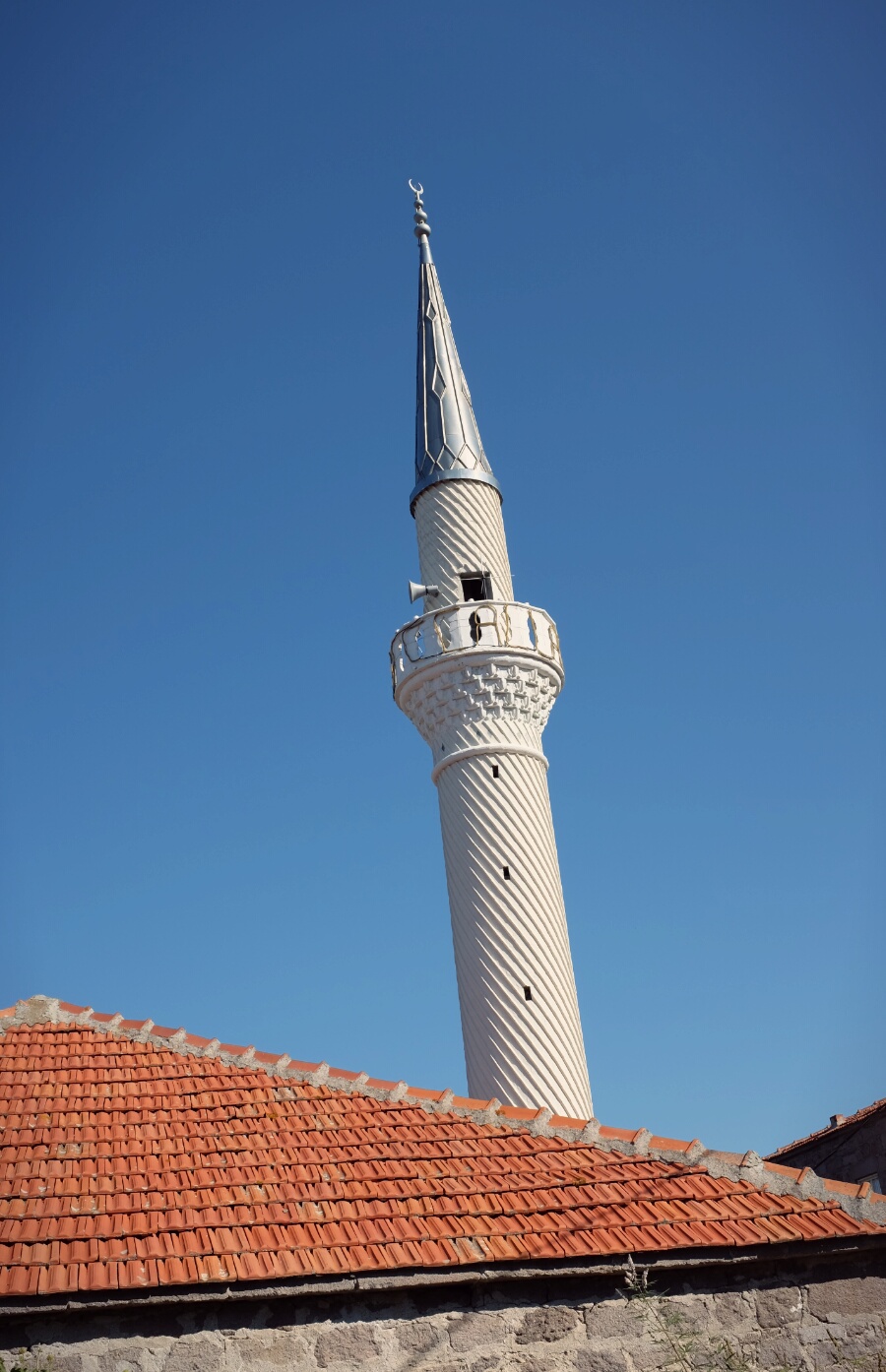 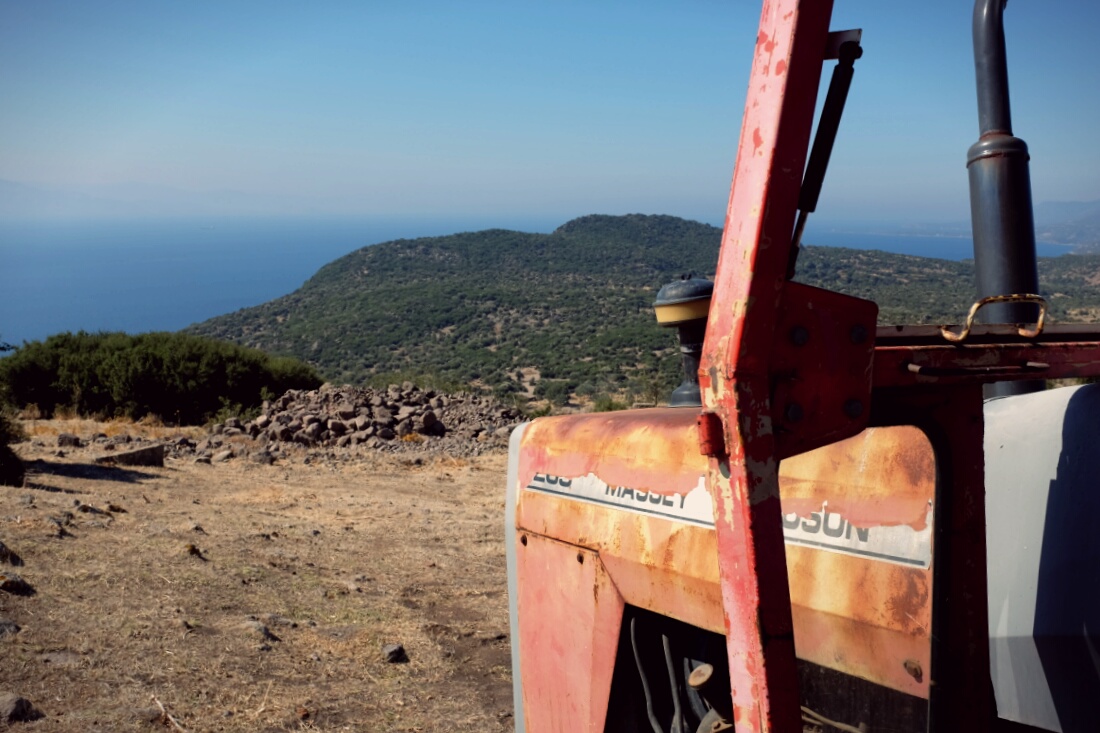 Tractor with a view 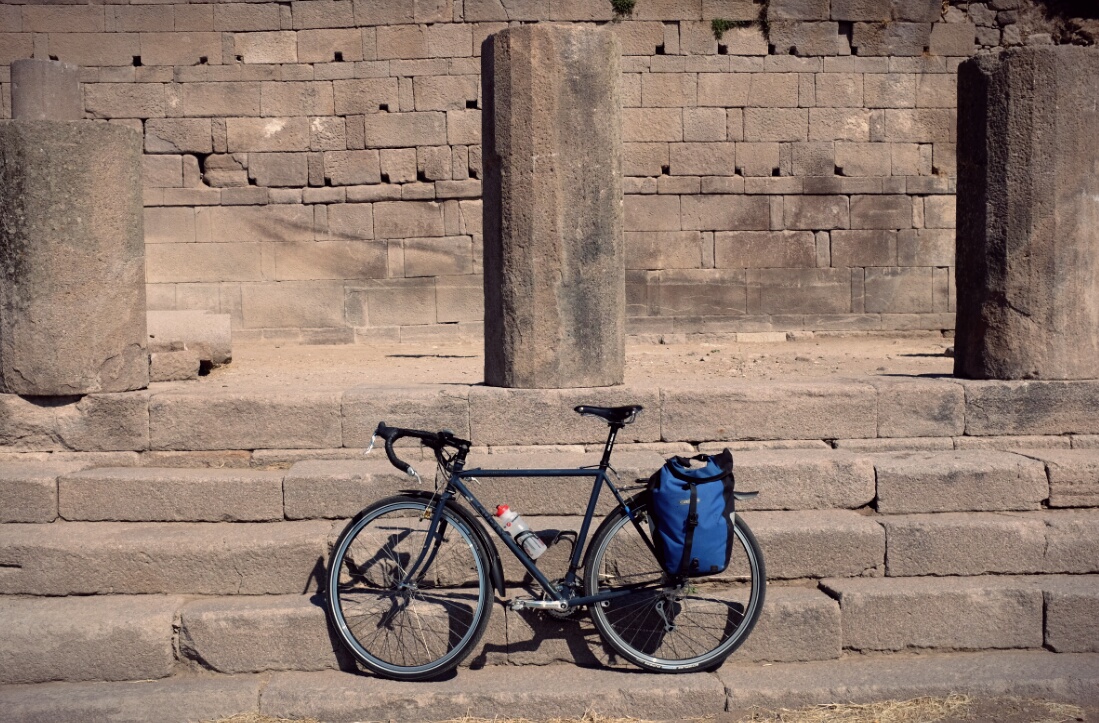 I enjoyed some fine, rocky, technical singletrack riding amongst the 2700yr old ruins. On the basis that gods are immortal and all seeing no doubt Athena will be along shortly to smite me for leaving tyre tracks in her temple…