I had to stop for a couple of nights, I realized yesterday how fatigued I’d become, mostly due to the last few days of high winds, rough roads and climbing. As one friend kindly reminded me I’m not 25 any more… yeah this is true I don’t recover quite as well as I did then but I’m very definitely cooler than the average 25yr old… IMHO, lol ;-)

So here I am in Las Lajas having a very lazy day – which is not hard as there is nothing here … just a dusty small village in the desert. There is one place to stay and I’m in it, for £13/night I have a small apartment with a kitchen, TV, wifi and best of all a fridge… not just for beer of course though that is the first thing I put in it I must confess. It’s ace after camping, and always interesting to see what’s on the telly in different countries….. Head & Shoulders are really going for it here with their ad campaign and daytime TV is equally as obsessed with widgets for toning bums, tums, tits and just about everything else as in the UK….. Today with the adrenalin and endorphins all run out I struggled to get up, lol, and nothing to do with having a TV. Not even coffee could cut through the sleepiness.  I want fresh legs for the 160km stretch of desert to Chos Malal – really want to do it in one go I think due to the absence of anything much in between. I can carry up to 12 litres of water on my bike… suspect I’ll need ’em ;-) I could camp out I suppose but in anything other than complete darkness I’d rather just keep riding.

So with time on my hands it’s back to yesterday then…. here’s a couple of pics of Villa Pehuenia.. 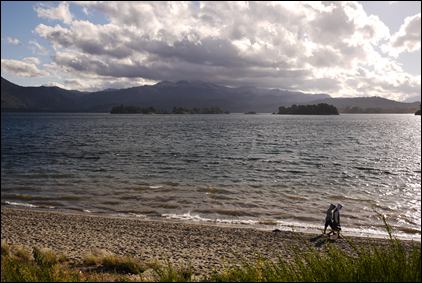 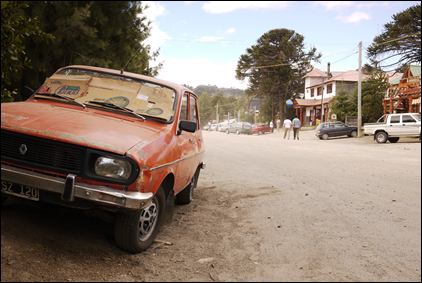 from there the track climbed pretty much for another 50km… it was beautiful as ever but I found it harder going than I expected -tired legs, an alternately soft sand and rocky/stony surface and the first proper altitude of this trip -OK only somewhere between 9000 & 10,000ft which isn’t much in context of what is to come but I’m not acclimatized yet. I did enjoy the icy cold wind though :-)It looks sunny in the photos but the wind was biting, and typically a cross-head wind much of the time. 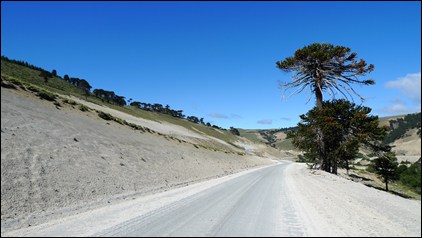 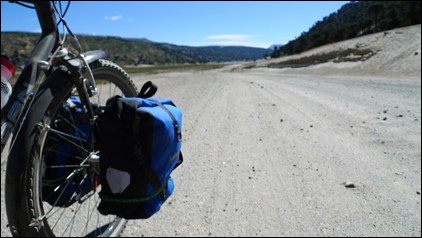 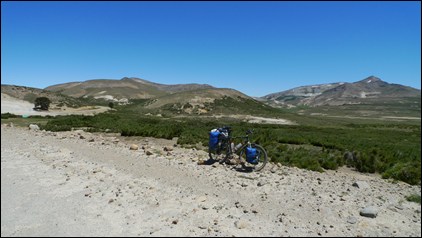 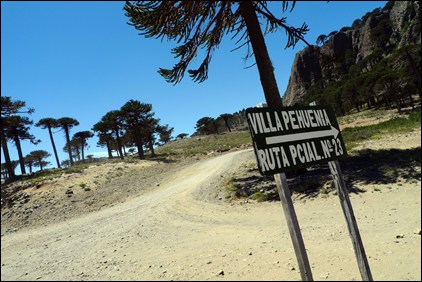 That first 50km took me 3 1/2 hrs, lol, before the track descended very steeply to join the main highway from Chile just below the Argentine border controls. I was robbed on this descent, the wind was so strong with the brakes off on a grade I reckon at about 15% I was doing no more than 15km/hr… which reminds me, the 2″ wide Marathon tyres are awesome on the rough stuff when running at about 40psi – can really fly over the rough stuff even with a full load.. and pumped up to 70 they’re not too shabby on road either.
There was a cafe at this junction… just a small hut on the outside but a inside a real haven from the cold and raging wind outside. I stopped for a coffee and a chat with the owner…. the first person in weeks who spoke any English… he bluntly told me he thought his English was better than my Spanish, lol, but then added “…. I think… maybe..” lol. 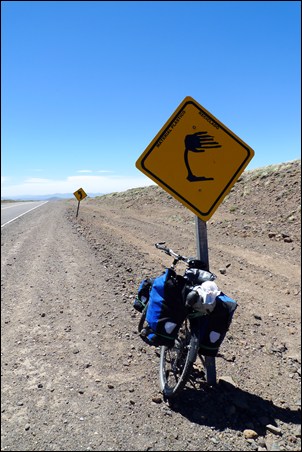 We talked about the weather… he was more English than he knew :-)

I pumped my tyres up hard for the 50km of asphalt to Las Lajas… which took just an hour :-) It was dicey at times as the wind at the pass was gusting around 120km/hr and a couple of times blew me off the road and had me sliding sideways in the gravel at the edges…. good fun on the right bike but bit white knuckle on a loaded tourer – I managed to keep it together, hehe :-) So with ears popping I descended very quickly to the desert below, the temperature rose rapidly and at one point doing 70km/hr I started thinking about those fat tyres heating up and blowing out – probably unlikely – but I slowed to 55 all the same :-) 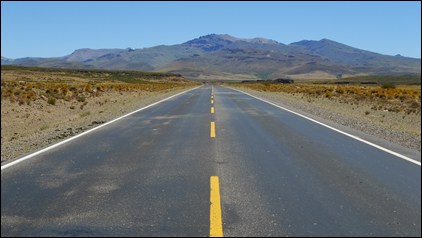 So, here in Las Lajas there is not much of anything really, I like it – it’s a genuine small town… it has a meat shop, a shoe shop, a fruit n’veg shop, a bread shop, a clothes shop and a shop with a wheelbarrow and cement mixer outside… everything you need really :-) The wind is still howling, it’s a northerly… could be a problem heading north to Chos Malal…. my loaded tourer has the aerodynamic qualities of a house. I have about 850km to Mendoza I think, as far as I know it is all asphalt so I have fitted my spare tyre to the rear wheel on my bike – it’s a Marathon Supreme slick so hopefully will give me a little extra speed. I’ll put the XR back on once I get north of Mendoza. 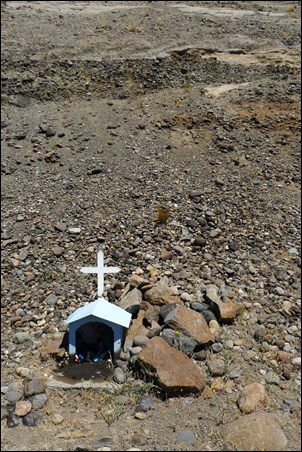 Not much more to say, I’ve had some sleep, some food, some more sleep, now taking a break from siesta with a mug of tea :-) A few pictures of this place follow….. 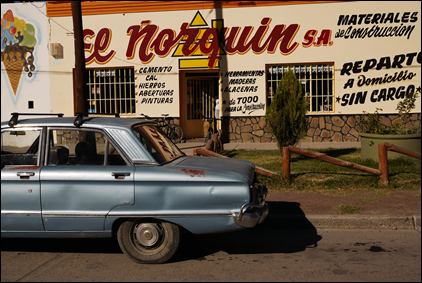 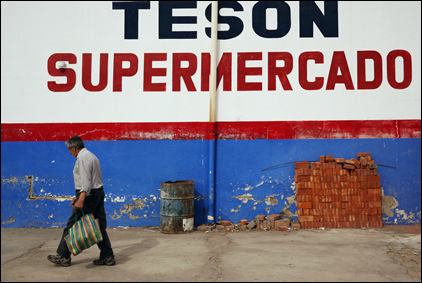 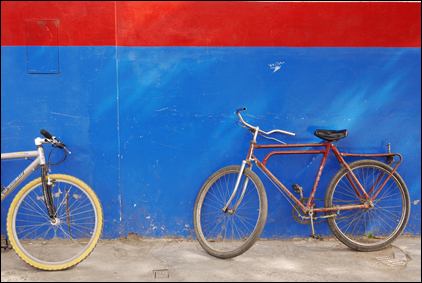 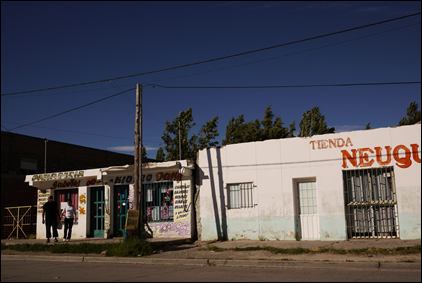 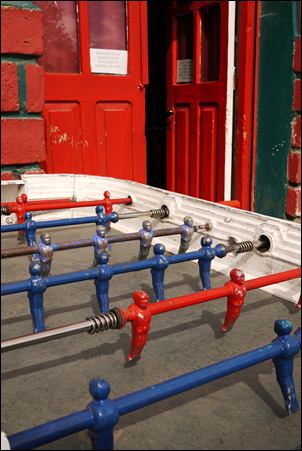 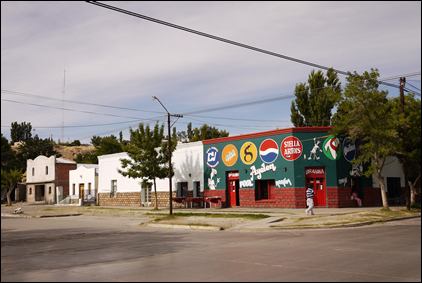 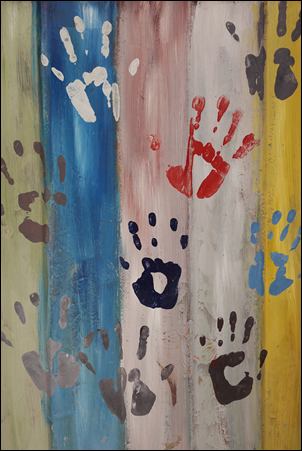 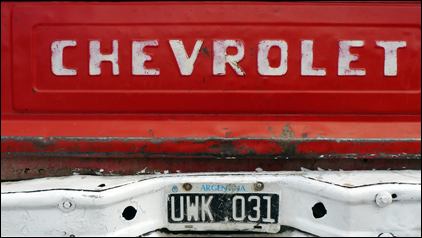 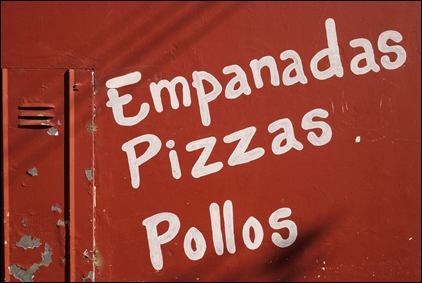 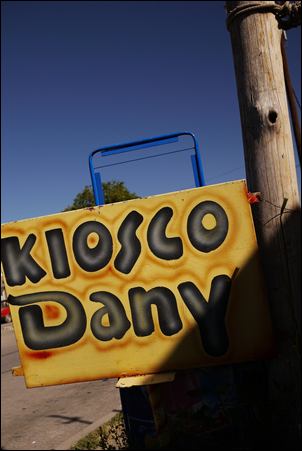 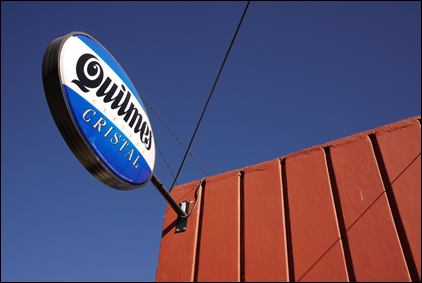